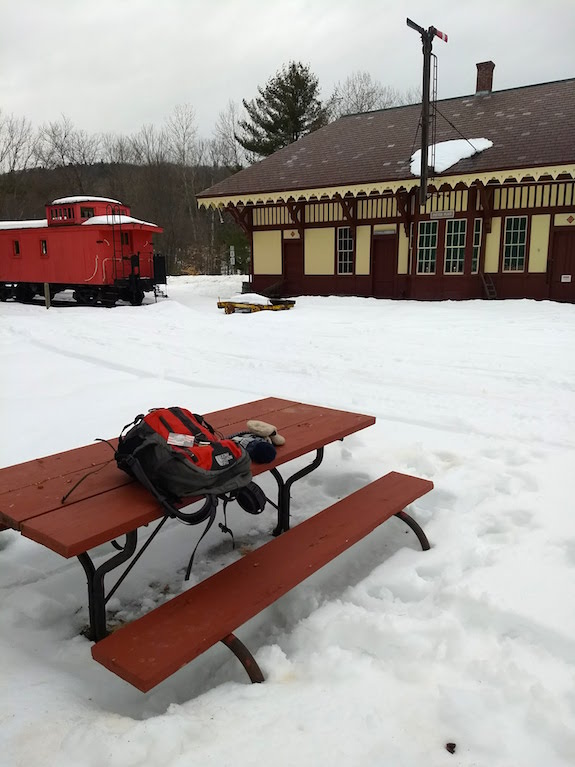 Potter Place station. The railroad tracks for the old Boston & Maine RR were between the picnic table and the station. It’s a remarkable preserved building including the telegrapher’s desk! The snow was deep! It was almost up to the heght of the table bench seats. Copyright 2018 Tim Carter

“Listen, I’ll get on your shoulders and I can reach it using the shovel.”

Jim Cluett, W1PID, was serious. But keep in mind he’s 71 and I’m a spry 65 years of age and there were at least 12 inches of snow on the ground.

No, we weren’t reenacting a segment of some old Laurel and Hardy movie, but anyone watching us might have thought so.

Jim, Dave Benson, K1SWL, and I had decided a few days earlier to take advantage of the balmy 43 F weather in central New Hampshire. The first thing to realize is temperatures like this might not be felt until the end of March so we didn’t hesitate to do our first outing of 2018. 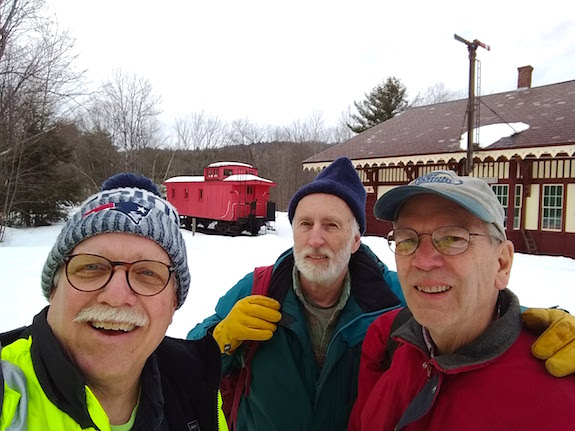 I’m on the left, Dave Benson, K1SWL, is in the middle and my mentor Jim Cluett, W1PID is on the right. Jim loves Potter Place and visits here regularly with his wife to ride bikes along the old railroad line that’s now the delightful 60-mile-long Northern Rail Trail. Copyright 2018 Tim Carter

We agreed to operate at the restored Potter Place railroad station in Andover, NH. Not too many decades ago quite a few Boston and Maine steam trains would race by or stop at the station platform just a few yards from where we were set up on a picnic table.

On this day, we just had one or two snowmobiles putter by on the railroad bed that’s now the Northern Rail Trail bike and hiking path stretching from Franklin NH to Lebanon, NH.

Potter Place is a great halfway point for Jim and me to meet Dave as he lives west of Andover and Jim and I live east.

Jim decided to set up on a box under the roof overhang of the station. Dave and I chose to use a picnic table Dave had cleared of ice and snow the day before as he happened to drive by Potter Place.

It’s important to realize it was my job to deploy my 29-foot vertical wire antenna attached to a 9:1 unun and a 15-foot counterpoise wire. I got out my bright green halyard line, spread it out and tied it to my handy 8-ounce water bottle. Rotating it with my arm I made a perfect launch up into a bare oak tree. The bottle soared up about 45 feet and I expected it to fall to the ground as it always does. 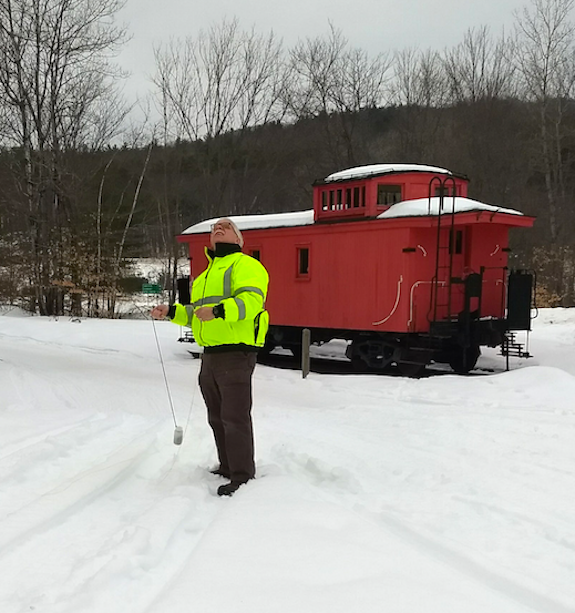 You can see me starting to swing my rock-filled water bottle. I’ve spied the perfect branch and this should be a routine halyard deployment. Rarely do I have an issue. Copyright 2018 Tim Carter

It didn’t. Somehow the line got snagged on some tree wart on a branch. Jim had taught me years ago to tug gently on the line to try to get the bottle to overcome the resistance.

It didn’t work. I got frustrated and started pulling hard on the polyester cord, the bottle jammed in a notch about 35 feet up in the tree and the cord broke.

The same thing happened to me at my own house back in October as I was relocating my shack dipole antenna. That’s a story for another day.

Dave got out his padlock and parachute cord and moments later the antenna was up, but I wasn’t a happy camper.

We decided to use my Elecraft KX2 and within a few minutes, we were on the air. Jim had already scored at least two QSOs as I struggled with the antenna setup. 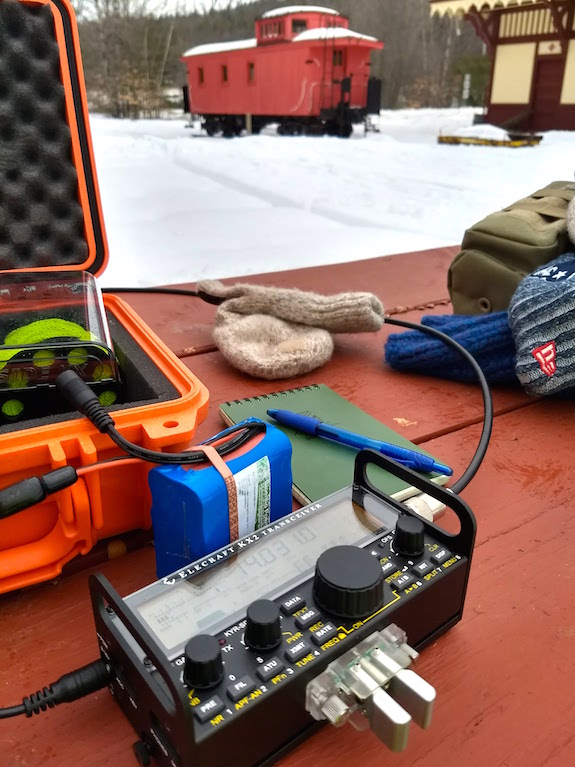 After a few minutes, Dave said, “Hey look, the water bottle’s almost down!”

I couldn’t believe it and rotated my head to see the rock-filled bottle about 12 feet up in the air!

Dave had a round-point shovel in his truck and the game was on.

Jim came over from the train station and started to toss the shovel up at the bottle hoping to coax it down the rest of the way.

His throws didn’t work and I tried to do the same with hapless results.

“Listen, if I get up on your shoulders that will give me enough height to swat at the bottle,” mused Jim.

I thought, “Hmm. I think I can support his weight in this snow. I want the bottle back. Let’s go for it.”

Moments later Jim climbed up onto the picnic table and a moment later he was balanced on my shoulders. I only did this because if I dropped him, we’d both fall in the soft 12-inch snow cover. 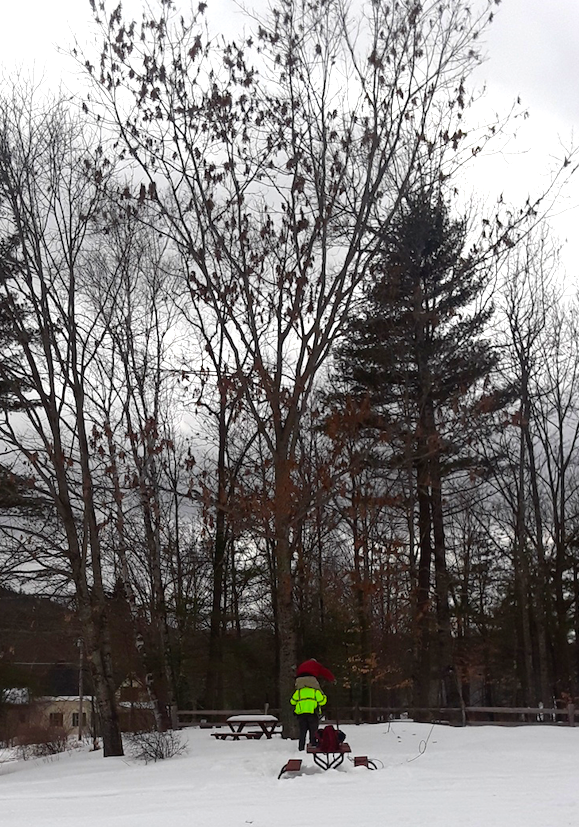 Jim is about to grasp the shovel out of the snow to bat at the water bottle. We were crazy to do this for a $3 water bottle. Copyright 2018 Tim Carter

The bottle was dangling about ten feet away from the table and I made my way over there. Jim was bobbing back and forth on my back as his outstretched arm with the shovel in it tried to hook the bottle so he could pull it down.

It didn’t work and I was rapidly running out of muscle power to continue to hold Jim up. I kneeled down and no one got hurt, including the water bottle.

“Listen, let’s stand on the garbage can that’s over at the station. Surely that will give us enough height.” Jim always has good ideas.

He went over, pulled out the plastic liner and brought the heavy can to the bottle retrieval area.

All the while Dave was just immersed in watching us bumble about trying to snare a $3 water bottle. No doubt he was laughing, but being the polite soul he is, he kept his thoughts to himself.

Jim clambered up onto the can first and had no luck. I got on and within a few moments was able to swat it with enough strength to bring it down out of the tree.

After the celebration ended I finally got on the air and made three QSOs, two of them DX. 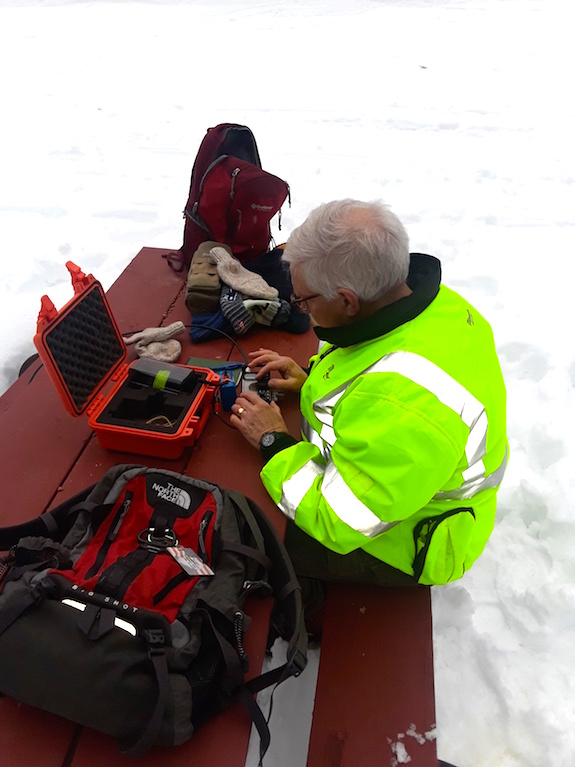 Here I am spinning the VFO dial on the Elecraft KX2 trying to find a strong signal. This photo was shot by Dave Benson, K1SWL. I’ve notified him that there’s a defect in the camera that seems to create round fleshy-colored spots in the photos. I didn’t have time to photoshop this image to produce a true representation of what the camera saw. (cough, cough) Copyright 2018 Tim Carter

Here are my three contacts.

Dave and I shared the KX2 and had great success on 30 meters.

Just before packing up we were very lucky to hear Joe Everhart, N2CX, who was outdoors as well in New Jersey doing a Parks on the Air activation.

All three of us each had a short Morse code conversation with Joe exchanging signal reports and pleasantries.

We were all in a great mood and the outing was far better than any had guessed it might be. I feel we would have been happy having just two contacts each and not getting back in the car and truck frostbitten.

I never was cold at all and am blessed that I can still continue to learn more about outdoor radio and QRP from the two legends that allow me to tag along.

Words of Wisdom From Jim Cluett

Driving home Jim said, “Water bottles are like old friends. They’ve worked hard for you on past outings and it’s hard to leave them alone stranded up in trees.”

Truer words have never been spoken. I’m glad my water bottle is safely in my backpack waiting for the next outing!