On Saturday, October 10, 2020 I (Tim Carter – W3ATB) met with four other dedicated radio operators in Bethel, Maine. Our goal was to solve a pesky communications issue that has plagued the New England Forest Rally (NEFR) for many years. CLICK or TAP HERE to read about the conundrum.

A year before at the 2019 NEFR I tested Near Vertical Incidence Skywave (NVIS) propagation with two other NEFR operators. It worked well, but I wanted to conduct a thorough test.

I’ve known about NVIS for several years and the ARRL did a fantastic podcast about the topic. Listen to it:

How Does NVIS Work?

NVIS works by sending radio waves straight up and they bounce straight back down off the ionosphere. Imagine pointing a garden hose straight up into the air. Watch this video for the science:

I’m the Chief of Communications for the NEFR and had the pleasure of working with four dedicated radio operators who’ve volunteered for the rally in past years. They understood the importance of coming up with a solution for this world-class racing event. Here are the following Extra-class radio operators who volunteered their precious time and their skills for this test:

Wayne also brought along his wife Sharyn. It’s always wonderful to have an XYL (former young lady) to help brighten the atmosphere.

We met just before 9 AM at the Sunday River Brewing Company restaurant to get fueled up as we would be in the middle of nowhere once we were up at South Arm. 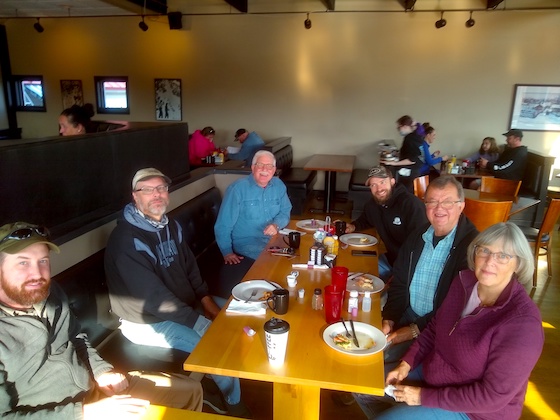 Once we left the restaurant, we had to drive nearly forty miles to get to South Arm, Maine. It was a stunning autumn day and we were treated with plenty of ocular delights as we traveled up Route 5 and then South Arm Road. 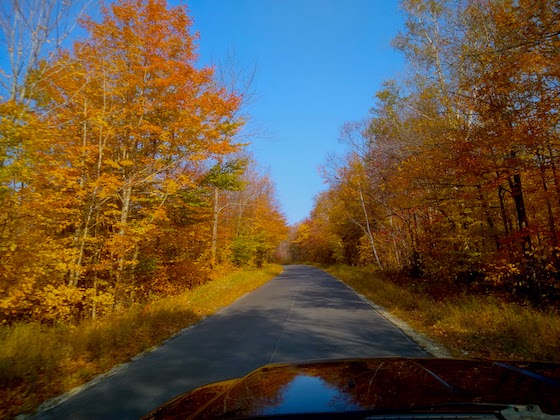 We lucked out on the weather. The temperature by Noon was close to 70 F. 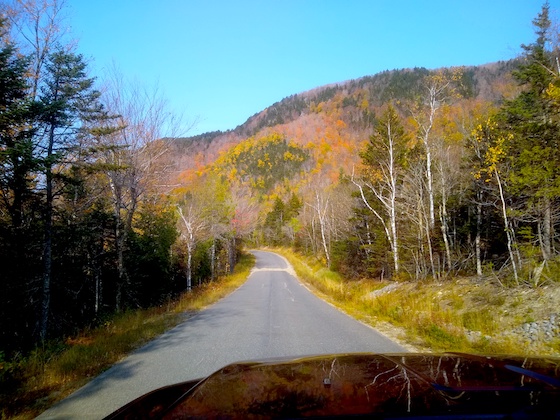 South Arm, Maine is pretty much in the middle of nowhere. It’s a great place for peace and quiet.

We had decided to test two HF bands: 80 and 10 meters. Our plan was to use either a flat or low inverted-V NVIS antenna for 80 meters and vertical 10-meter dipole antennas for the test. 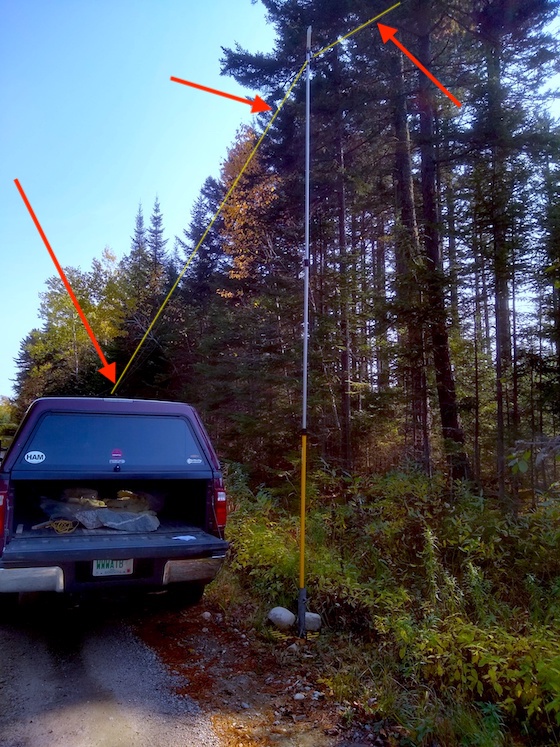 Here’s my 80-meter NVIS antenna setup. I have an extendable fiberglass painter’s pole supporting the center of the 80-meter dipole. The arrows point to yellow lines that indicate where the antenna wires stretched. I was able to set this up in just fifteen minutes. 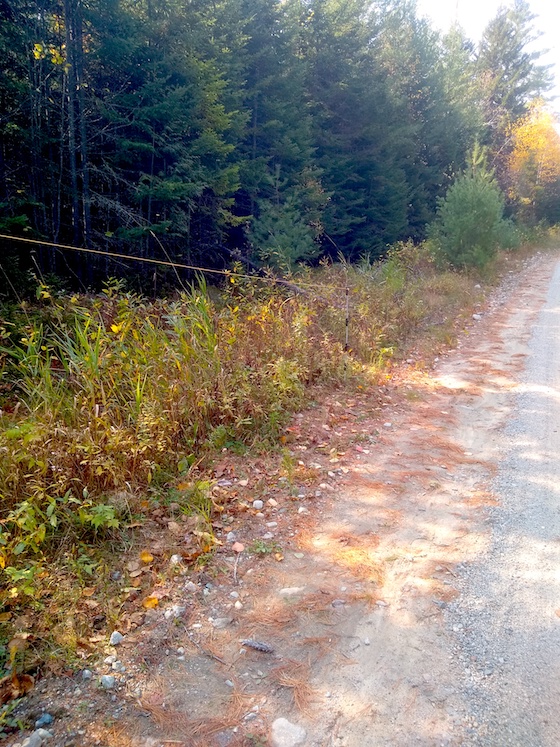 This is one end of the 80-meter NVIS antenna. That’s a fiberglass electric-fence support that’s ideal to hold up the end of the wire. JT had suggested using these. This small post is about 60 feet from the painter’s pole.

I had asked Tim Foy if he’d be kind enough to be net control for the test. He was positioned at the Start position of South Arm stage of the NEFR. I decided to set up at the Finish position about nine and one-half miles down the course. Wayne, JT, and Justin were at critical locations where normal radio operators set up during this NEFR event.

We all had 2-meter mobile radios as well so we could communicate via a relay system to ensure all were ready to begin the test.

Our plan was to start with 100 watts of power and work down to low power until one, or more, operators could not be heard clearly.

I was using my trusty ICOM-7000 mobile HF radio. The other four operators also were well equipped for the test. I had created some simple logsheets for each operator to use to record the signal strength of each other operator as Tim Foy called for them in the round-robin net. 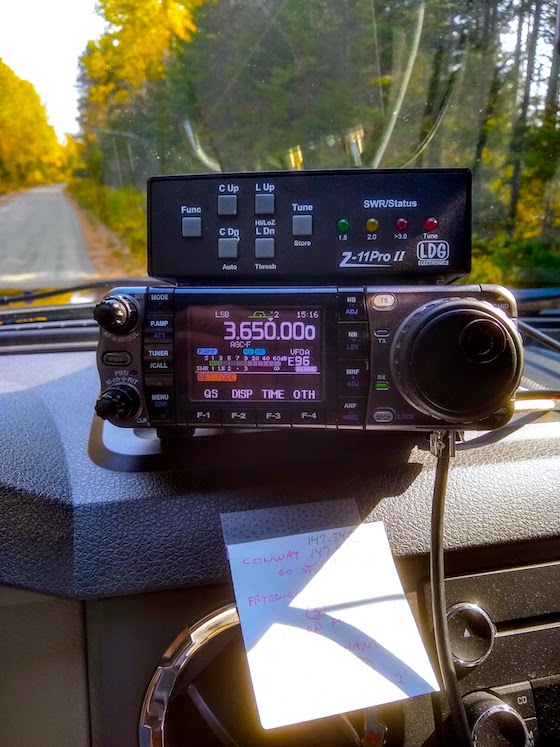 I was always the last to check-in and I was bouncing up and down during the first round of the net. Every operator’s signal was strong and clear. Justin had a minor over-modulation issue, but even with that I could clearly make out what he was saying.

As we continued to reduce power levels from 100, to 50, to 25, to 10, and finishing with 5 watts, I was able to hear everyone and everyone heard all others. This had never before been done on this stage of the South Arm course. Our test was a success! We had finally solved the South Arm comms conundrum.

Listen to the entire test:

Justin had suggested weeks before that we try 10 meters. It’s a little-used HF band and it very close to the older citizen’s band of 11 meters that was popular in the 1970s. I was able to hear all the other operators on the course with extreme clarity, but I couldn’t hear Tim Foy at the Start. Ten meters turned out to be a dismal failure.

I had hoped it would work because those with Technician privileges are allowed to use a small part of the voice segment of the 10-meter band. This would open up the candidate pool to all who volunteer so long as they own a radio that can transmit on 10 meters.

We are going to continue to test other HF bands and try to get the 10-meter dipole antennas higher in the air to see if that will make a difference. But for now, we know 80 meters NVIS works and we can provide the quality of communications this spectacular race event deserves.