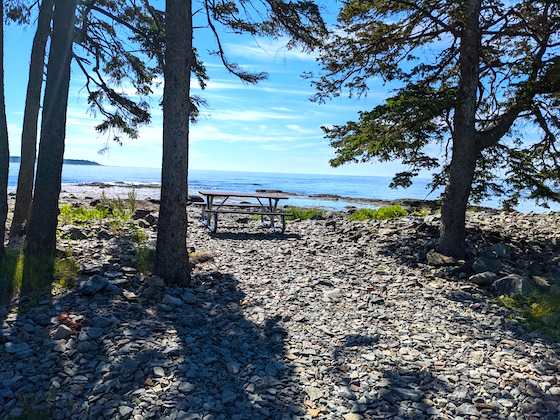 This is where I’d set up and operate on the second day. What a view from the ham radio office!

On June 29 and 30th, 2022 I was lucky enough to be on Mt. Desert Island (MDI) in Downeast Maine visiting my daughter, son-in-law, and granddaughter. I had the early morning to myself each day and was staying in Southwest Harbor only four miles from the Seawall picnic area in Acadia National Park. 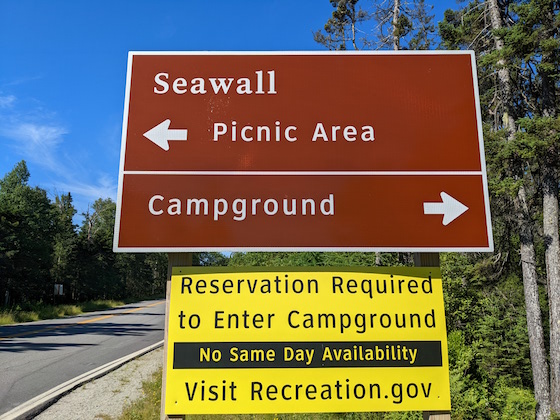 This sign is just a minute away from the picnic tables set up just above the high tide line. You must visit this part of Acadia NP!

This part of Acadia is at, or near, the southern-most part of MDI. The weather was superb with bright sunshine and cool temperatures in the mid 60s F. The intense sunlight, however, made it feel much warmer.

I usually schedule a Parks on the Air (POTA) activation a day or two in advance. Being a person that likes to mix things up, I posted my first activation just 45 minutes before going on the air. The folks running the POTA website have made it very easy to do even with a smartphone. I was sitting in the parking lot of a restaurant when I announced to POTA chasers, “Hey, come work me here in Acadia NP at 1200Z!” It worked!

The first day I was in a rush because I was trying to get on the air at the promised time. I drove past the table I was to use the next day without seeing it. All the other tables I spotted next to the water had no trees by them. I need a tall tree to hold up my vertical 29-foot wire that has a 9:1 unun attached to it. I decided to use my Elecraft KX3 for these activations.

I settled for a picnic table with a very small tree next to it. It would be a miracle if my wretched drooping sloper antenna would work. This is what happens when you don’t scout an area first. 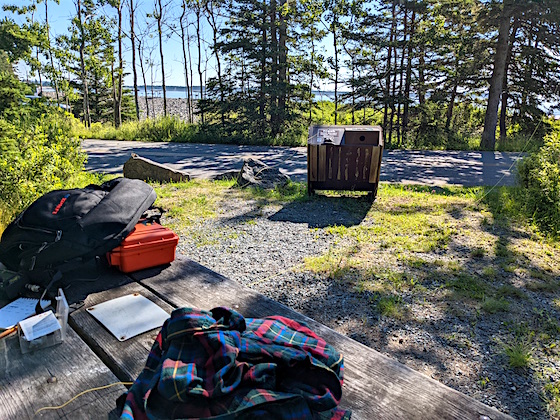 This is the table I sat at the first day. It was not great, not terrible.

Fortunately, enough chasers came to the rescue. I logged 14 contacts in about 45 minutes. Ten of them were on 40 meters and the other four were on 20 meters. After I packed up my gear I noticed some movement across the road. A man was leaving a picnic table nestled under some very tall pine trees.

“That table looks perfect. How did I miss that driving in?”

After he walked away, I sauntered over to scout it out. It was just above the high-tide line and faced the Atlantic Ocean. The best part is low tide on these two days was right around 1100Z so the water was 70 feet away exposing a nice piece of granite bedrock I could stand on to get my halyard up and over the trees next to the table. 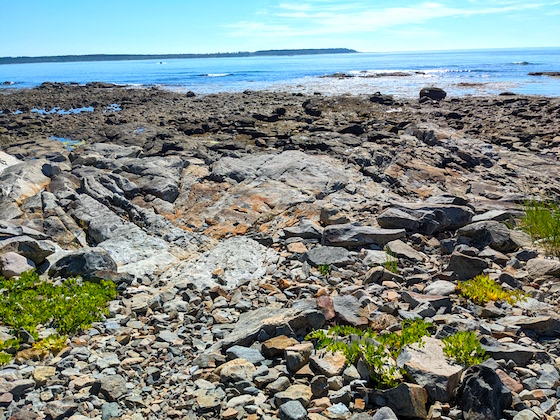 Right in the center of the photo is where I’d stand the next morning to get my halyard up and over the trees next to the picnic table.

I could already feel that tomorrow was going to be an even better day than today.

Since I knew I was coming back to the Seawall area to do back-to-back activations, I put myself on the POTA schedule page about 15 hours before I would go back on the air. I believe it helped me get even more contacts than the day before.

Low tide happened as I was getting out of the shower and it would take at least four hours before the water lapped up and over the granite where I was about to lay out my halyard line. I’ve discovered all the secrets to success using a small 8 oz nalgene water bottle filled with some rocks and sand to get a halyard line up 50 or 60 feet. I did it on this day with one throw. I wish I had captured the throw on video. 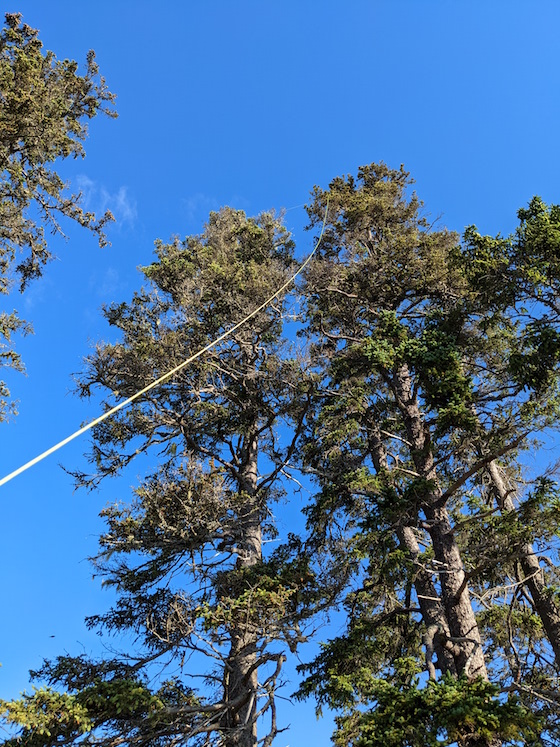 The water bottle sailed over the tree. It takes hours of practice to get the release timing just right.

Here’s how I got that water bottle to sail over the tree:

I stretched out a 25-foot counterpoise wire from the unun down to the bedrock platform. While it was not in the seawater, I’m sure it was getting some of the good jujumagumbo from the ocean. 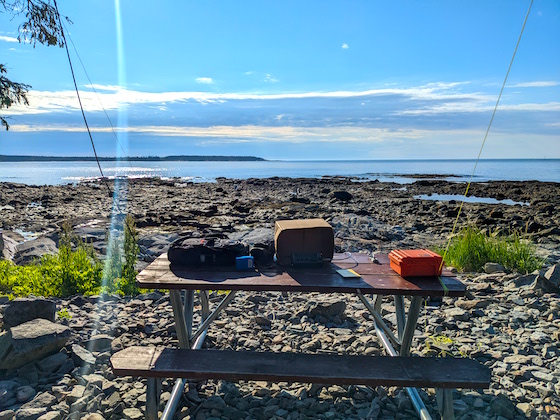 This is my setup on the second day. The cardboard box is providing shade for my KX3. The day before it overheated in direct sunlight and the electronic keyer started malfunctioning.

I had texted my outdoor radio mentor Jim Cluett, W1PID, and we barely worked each other on 40 meters. He was in New Hampshire so my signal and his might have been really close to the HF shadow boundary.

At 1200Z, I started to call CQ and moments later I started logging contacts. There were no huge pileups, but I didn’t expect any that early in the morning. I was hoping for some European POTA chasers, but they must not have heard my 10-watt signal coming out of my Elecraft KX3. 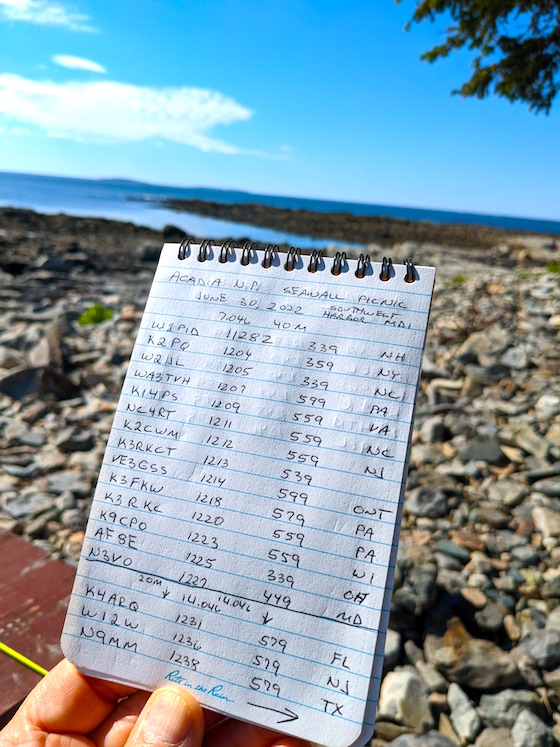 I filled this page of my logbook on day two. Several other 20-meter contacts are on the next page.

The well ran dry on both 40 and 20 meters before 1300Z. Even so, I logged 14 operators on 20 meters and another nine on 40 meters. I packed up in no great rush to leave this wonderful place, even if weed whacking was on the schedule just behind me starting at 1230Z!

Yes, halfway through the activation NPS employees showed up to weed whack the tall grass across the road from me. I was not too happy to discover I had left my earphones back in my shack 225 miles away. Be prepared!