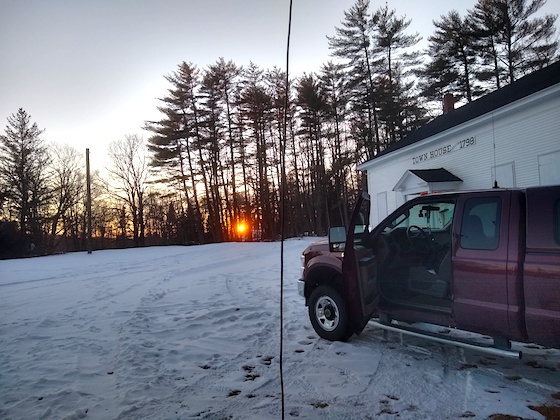 Winter Field Day 2021 | I’ve broken down my radio inside my truck and all I have to do is take down my 29-foot vertical wire antenna. You can see the coax cable reaching up to the 9:1 unun that’s up 15 feet off the ground. It was 10 F and windy. My hands were blocks of ice by the time the string and antenna were on my amazing Trident finger reel!

Two weeks ago I decided to participate in Winter Field Day. In years past, I’d always made excuses why not to do it. This year I was bound and determined to get outdoors. The contest organizers make it worth your while to do this. Check out all the bonus points available for you should you decide to get outdoors into the fresh air and embrace Mother Nature and the Old Man:

I also got two points per Morse code (CW) contact as well as a 4X multiplier for using just 5 watts to make each contact. Believe me, you can make lots of contacts with just 5 watts and a great antenna. 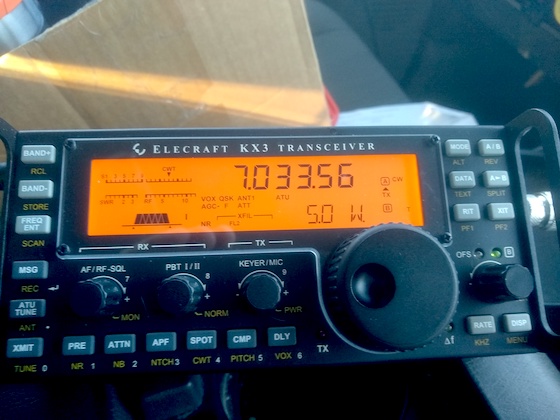 Here’s my Elecraft KX3 set at 5 watts of output power. Think about that. A traditional tiny nightlight bulb is usually about 4 watts. My radio signal at 5 watts can travel thousands of miles!

I operated from inside my uninsulated parked truck on top of the crusty snow cover at the historic New Hampton Town House. The building was constructed in 1799. My truck was turned off the entire time I was there.

When I made the decision to participate, the future forecast showed milder weather with temperatures in the low 30s and snow. That’s relatively mild weather for New Hampshire in the winter. But the Old Man changed his mind as he frequently does.

This is what my phone said when I got back home around 5:26 PM. My hands were as cold as the Athabasca glacier when I was finished rolling up my antenna and lanyard string on the reel about 40 minutes before I grabbed this screenshot! Note the RealFeel temperature of 0F!

It was 5F when I woke up and the forecast was for the temperature to claw its way to 15F. Fortunately, abundant sunshine was also forecasted. My plan was to point the front of my Ford F250 4×4 truck cab south and the glorious infrared radiation would convert my truck cab into a greenhouse. I’m good with that!

Years ago Jim and I were convinced we could operate in cold NH on a sunny day if we were out of the wind and could capture the infrared energy just as we captured radio waves. We decided to make our own greenhouse using a teepee frame and clear plastic. It was a fun activity, but it was a lot of hiking to get to the teepee.

No Time for Tangles

Many moons ago I went on my first winter outdoor radio outing with my mentor Jim Cluett, W1PID. We went to a small quintessential ski hill, Veteran’s Memorial Ski Area, in Franklin, NH. It’s only open on the weekends and staffed by volunteers.

It was a gray cold day and I didn’t realize the exercise was to see how fast one could deploy the antenna because as Jim later said, “You only have seconds/minutes to get set up and make a QSO before your hands are numb.”

While I was playing patty-cake on an HT helping SOTA friends Herm and Myrle on a nearby summit get one of the four QSOs they needed, Jim was busy getting his lanyard line in a tangle. It’s a day we’ll both never forget. It brings tears to our eyes each time it comes up in conversation.

Jim will tell you that I’ve mastered the skill of throwing a water bottle up into a tree 50 feet or more. He was a great teacher of the method.

But we tend to do it in t-shirts and maybe a light jacket. As I was getting ready to deploy my string on the frozen snow crust, I kept thinking, “No tangles. You get one chance to get this up in the tree. It’s COLDER now and windier than it was that day with Jim.”

Within seconds of starting to take the string off the reel, it was tangled so bad I thought I’d have to go home! The wind was howling and you can’t untangle a thin string with gloves on for goodness sake. Off came the gloves and I was desperately running out of time to get the string in a nice layered coil on the snow so I could loft the water bottle up into the branches. 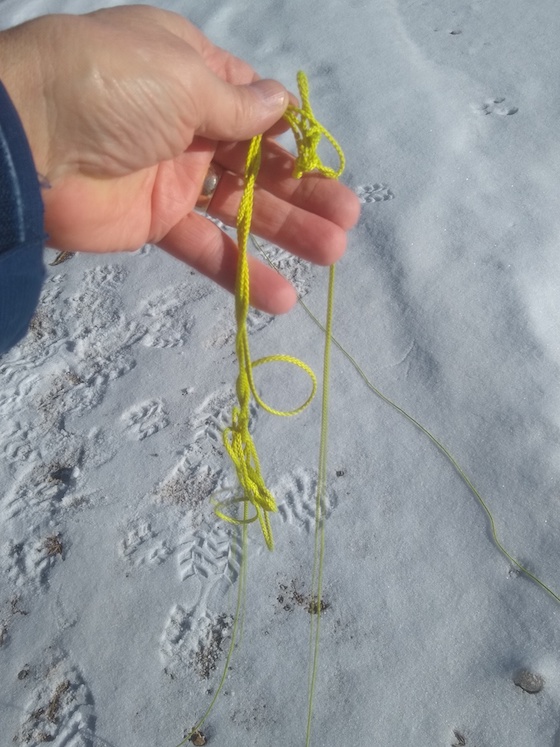 I had to get a photo of this nightmare for Jim. I can hear him laughing ten miles away as he reads all about this misfortune of mine!

Once I had the string untangled and the cold was taking control of my hands and emotions, it took me three tries to get the water bottle over the perfect branch. I had vastly underestimated how my heavy jacket would encumber my throwing motion! 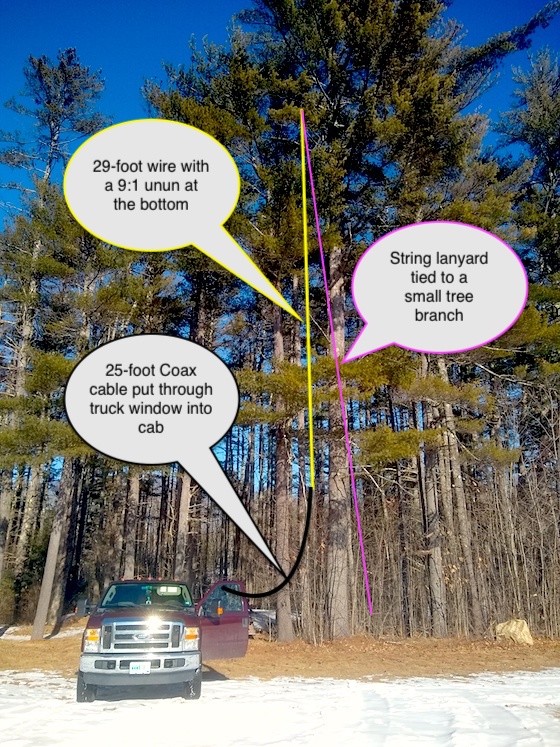 This is how my antenna was setup. The wire is very thin, 22 gauge I believe. I have a photo of all this, but the wire and string are so thin, you can’t see them in the photo.

I’m a so-so CW operator. I can just about hear Morse code at 17 words-per-minute (WPM) in a normal casual conversation. During contests, I’m able to make out call signs with operators pushing 25 WPM. This past summer I made a point to participate in the Wednesday afternoon CWops one-hour sprint to try to improve my listening speed.

A few years ago Jim encouraged me to start doing contests to help increase my CW speed. Once I gained some experience, I started having some fun. My first low-stress contest success was the Zombie Shuffle back in 2015.

On this day, January 30, 2021, I decided I’d only operate from the start at 1900Z until the sun went down. I have trouble driving at night and wanted to be back home at least 30 minutes before dark. This time of year in New Hampshire, that means I’d only operate for 2.5 hours.

I was happy to make 29 QSOs during that time. Part of the time I was on the phone with a friend who lives in Washington, DC. After the call, Jim and another friend texted me to check on my progress. These interruptions cut into my operating time but I’m always happy to hear from friends. Friends are far more important than log entries as far as I’m concerned.

If I had devoted my full attention to the magic cool waves that seeped into my thin 29-gauge antenna wire and slithered their way into my KX3, I’m sure I would have had 40, or more, QSOs. I had a blast and will do it again next year unless the Good Lord has a need for me to do plumbing or carpentry work up in Heaven!

Here are some other photos that hopefully convey the spirit of the event. My thanks to the team who put on Winter Field Day. 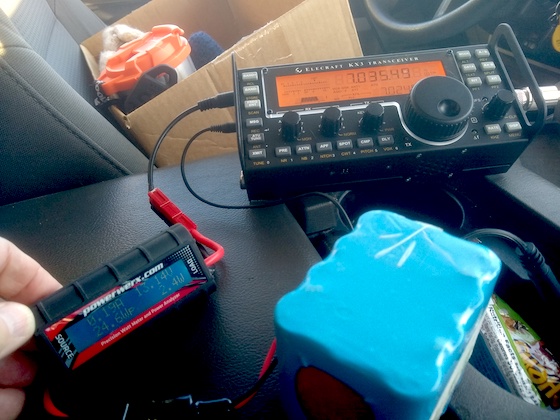 This was my setup. You can’t see my micro Pico iambic paddles. It’s an Elecraft KX3, a PowerWerx power analyzer, and a Bioennopower LiFPh 6 Ah battery. I used the power analyzer because in the cold weather I wanted to see how long my battery would last. The KX3 has a reputation of sipping power and it did just that during the adventure. 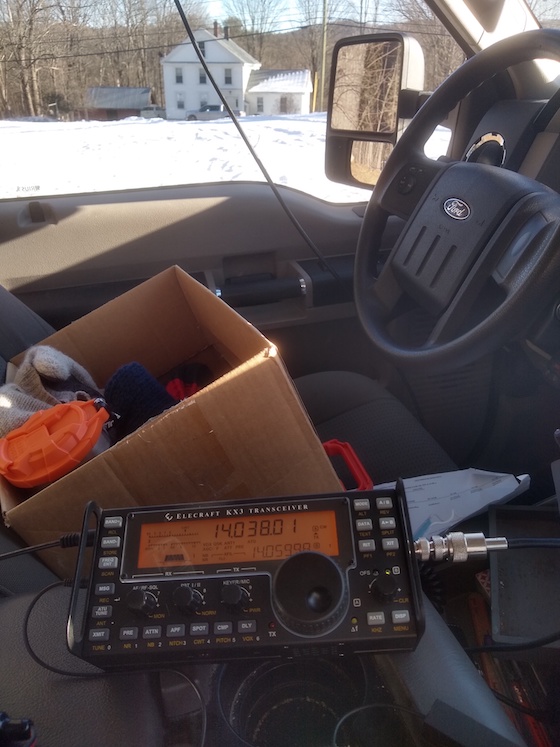 This is just a close-up shot of my KX3. It’s such a wonderful radio. Thanks, Wayne! I started out on 20 meters in case the band went to sleep. 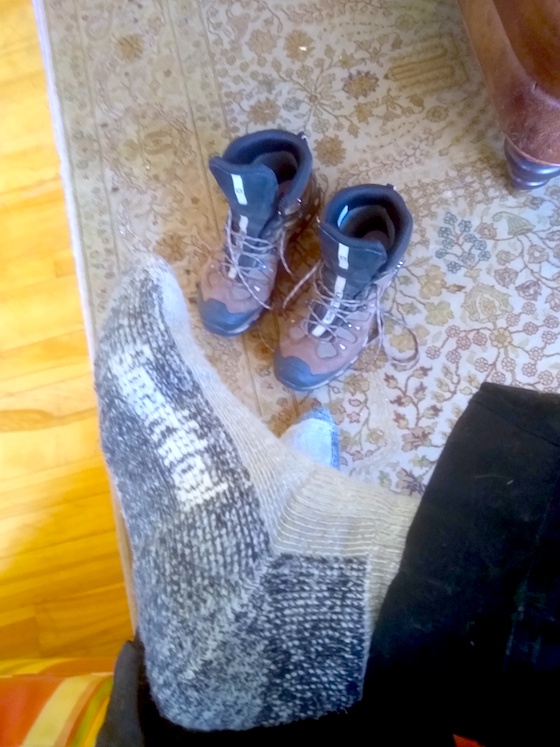 I worked outdoors for years and know how to dress for cold conditions. My SmartWool socks and Salomon boots would keep my feet warm in the uninsulated and unheated truck – or so I thought. 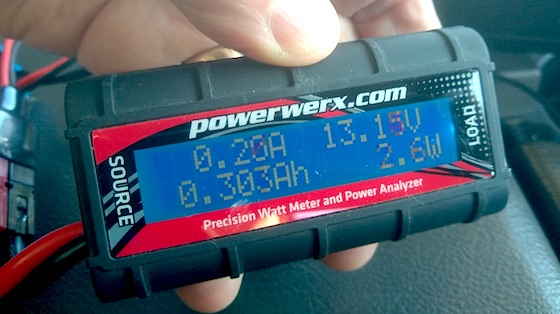 Here’s a closeup of the Powerwerx power analyzer after about two hours of continuous operation. The KX3 has only nibbled 0.30 Ah from the 6 Ah BioennoPower battery. I could have operated for many more hours. 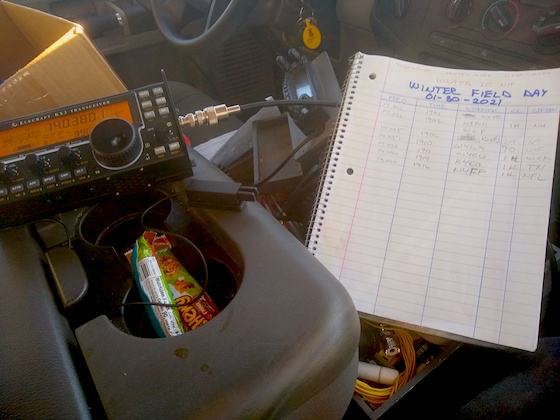 Here’s a photo of my logbook. This was about 17 minutes or so into the event. I filled that page and part of the next one before the sun was kissing the horizon. I just have to get my antenna out of the tree and can then head home. I was pleased with my 29 QSOs. I don’t know why my hat rotates on my head without me touching it. I think it’s the Coriolis effect and has nothing to do with my thick hair. 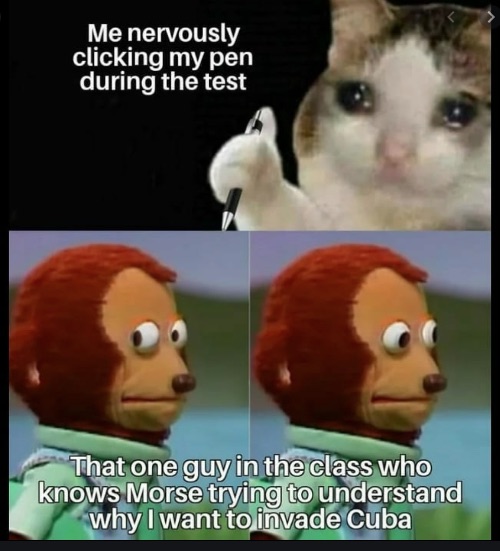 Morse Code The Office – Morse is not Outmoded, Jim

Morse code was featured in an episode of the hit show The Office. Husband and wife team Jim and Pam work together to drive Dwight crazy.

Jim Halpert says to Dwight after being accused of sending Morse clicking a ball-point pen, “…and we took a class on a very outmoded and unnecessary form of communication.”

There are millions out there that would disagree with Jim’s statement, even though we know he’s just trying to make a point with the paranoid Dwight.

Watch the video and be prepared to chuckle.