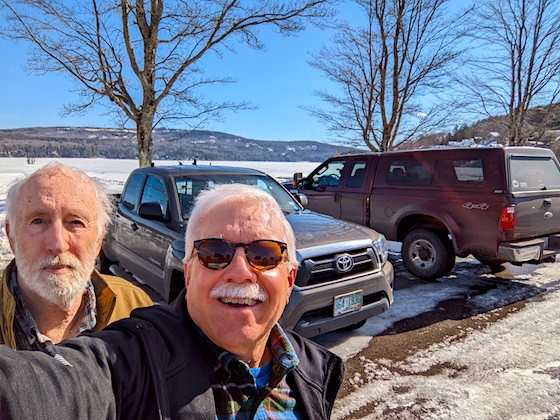 That’s frozen Lake Sunapee over our heads. I’m in the sunglasses and Dave’s sporting the nice beard. That tree just behind us held up my 29-foot vertical wire antenna for the adventure.

Dave Benson, K1SWL, and I met up at Mt. Sunapee State Park on Friday, February 11, 2022 for a Parks on the Air (POTA) activation. It was a sunny and relatively warm day for the middle of winter in New Hampshire.

Dave lives nearby and had scouted the parking lot at the beach. A line of tall deciduous trees stood guard duty over the stored picnic tables that normally dot the grass between the beach sand and the blacktop.

No grass or beach sand was visible, but there was plenty of sand on the nearby roads to combat the ice. Fourteen inches of crusty snow blanketed everything including the ice-covered Lake Sunapee. A snow berm created by the state-park snowplows ensured that we’d not drive up onto the frozen tundra. 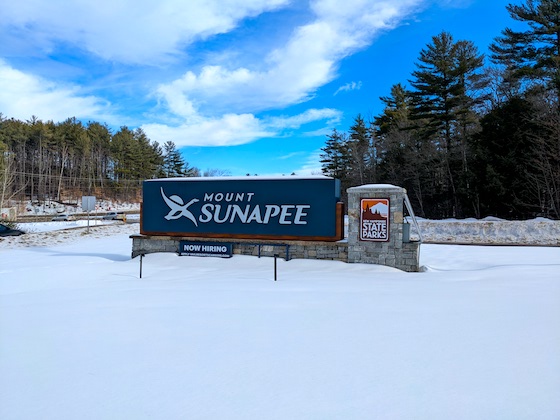 Out on Lake Sunapee. we could see at least five or ten bob houses. These tiny shacks on skis provide shelter for fishermen who drill holes in the ice to drop their baited lines. Rumor has it that moderate amounts of firewater are often consumed in these itty bitty houses. 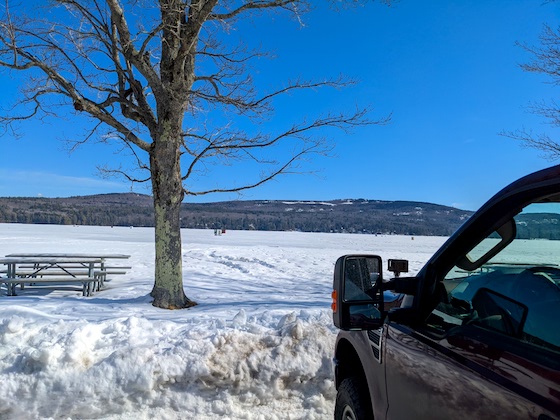 Those tiny black dots are bob houses on the ice. Several people were out there too skiing and fishing out in the open. 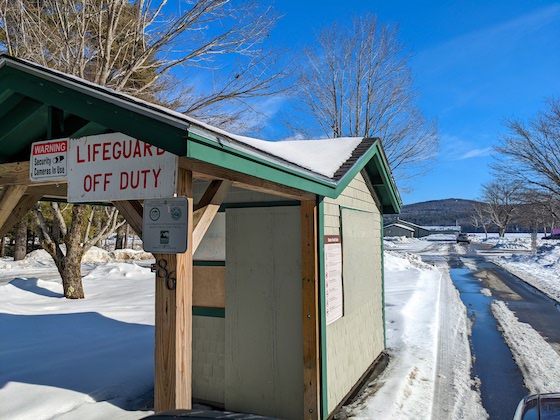 Are you kidding me? No lifeguard today?

We both arrived within minutes of one another at 10:30 AM. I was stunned to see that no lifeguard would be on duty today. New Hampshire folk are hardy for goodness sake and the temperature was going to be up over 40 F by noon! I guess they just don’t make lifeguards like they used to.

I used the following gear to activate this state park:

After saying our Hellos and commenting on the gift of a nice day from Mother Nature, Dave helped connect the antenna and extend the coax cable into the cab of the truck. The cab of my Ford F-250 Super Duty 4×4 was going to be our mobile radio shack. It was like being in a greenhouse. We had to crack the windows to keep from getting too hot. 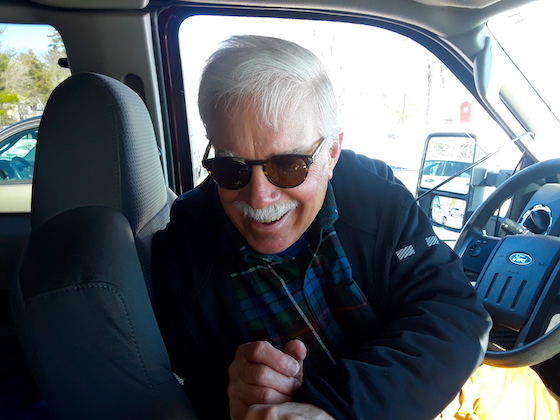 I’m spinning the VFO knob on the Elecraft KX3 and happy that I’m hearing signals. The solar radio conditions were marginal but success was imminent!

Before we knew it it was just before 11 AM or 1600 Universal Time. I had advertised this activation on the POTA website so we knew that radio operators at home were waiting for me to get on the air and transmit: CQ POTA DE W3ATB

Tiny Pileups in Spurts and DX Too

I decided to start a little early and right away made my first contact. Dave decided he just wanted to log for me. That makes the process easy for the operator. Without a logger, you’re constantly switching from using the pen to write and the paddles to transmit Morse code.

I made 19 total contacts in just about 30 minutes only needing ten to officially activate the park. When the sun is in a good mood and lots of chasers are out there, an experienced operator like Dave can log a contact every 40 seconds. It’s not unusual for Dave to gather 50, 60, or more contacts when he does activations. 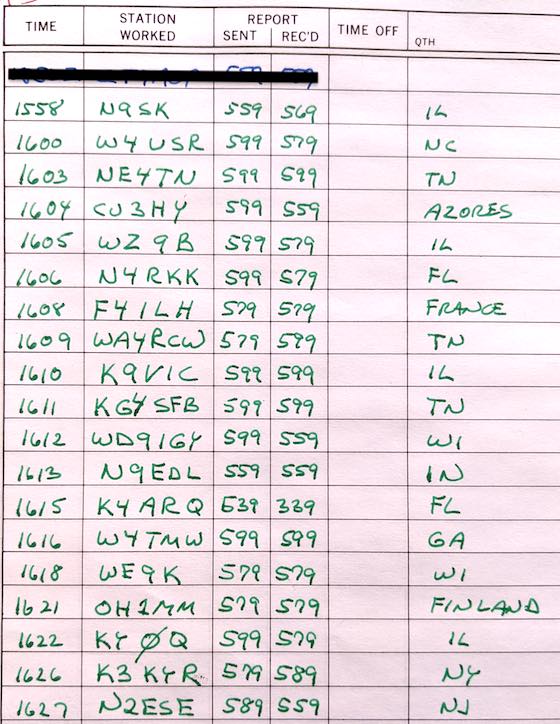 Here are the contacts I made. The last two are on 40 meters. The others are on 20 meters. It was great to have my signal bounce across the Atlantic Ocean! It’s magic no matter what anyone tells you.

We ran 20 meters first and only got 17 contacts, three of them DX as you’ll see on the log sheet. The last two contacts on the log sheet were both on 40 meters. Once that band went dead with no other chasers we decided to break down and go get some lunch.

About halfway through our activation, a stranger came up to Dave’s side of the truck. He was dressed in snowmobile gear. I saw him but Dave didn’t as Dave was looking my way. I held up my finger to signal, “Please wait a moment.” He obliged.

After finishing up with that contact, I rolled down the window and he said, “Are you guys ham radio operators?” It was a comical question as he knew we were seeing my antenna and the bright green halyard holding it up in the tree! It turned out it was Mark Wilson, K1RO. He’s a top-flight radio operator who lives nearby and was out enjoying the delightful day.

It turns out he knows Dave, but I had never met him. We chatted for a few minutes, he wished us well, and I assume he got on his snowmobile to glide across Lake Sunapee.

It was a delight to get out as my last time doing outdoor radio was the last warm day of 2021 when Jim Cluett and I wandered down to the bank of the Pemigewasset River at Profile Falls.

Spring is getting close. Once it’s here I plan to go out at least once a week to snare more POTA contacts out of the ether. I hope to get you in the log or maybe I can convince you to come to log for me!