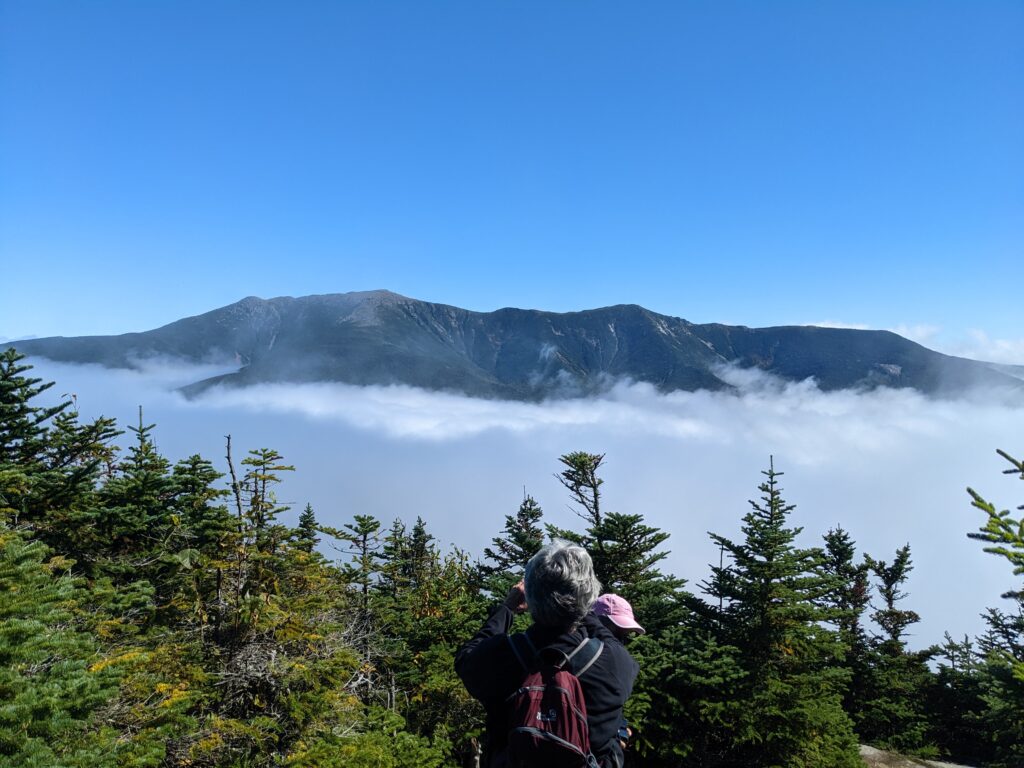 Mt. Lafayette is the tallest peak across from Cannon Mountain. We had to travel through the thick undercast to get up to sunny skies.

Cannon Mountain POTA – Three in One

On the first day of autumn 2022, September 21, I had the pleasure to go to the top of Cannon Mountain with Frank Towle, WF1T. Frank and I are fairly active in Parks on the Air (POTA) and we wanted to be the first operators to activate the 2nd Presidential State Forest here in New Hampshire.

It turns out that three different POTA entities overlap at the top of Cannon Mountain:

As we approached Cannon Mountain from the south on I-93, we could see that the top half of the mountain was shrouded with thick clouds. The forecast was for sunny skies but I never thought it would happen based on the dreary conditions as we parked in a nearly empty lot below the tram building.

Most mountains in New Hampshire you need to climb up using your footmobile. Cannon Is one of a handful of mountains in the White Mountains that you can get to the top in just minutes. The tram whisks you up from the base of Franconia Notch to the top in just eight minutes traveling at 12 feet per second. Within minutes of riding up, visibility dropped to ten feet. 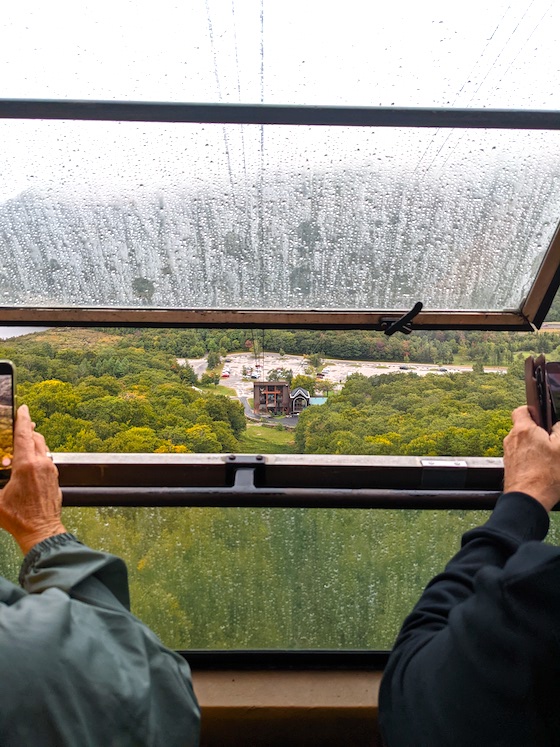 We’re on our way to the top and below the clouds. Within a minute, that changed as we dove into the thick clouds. 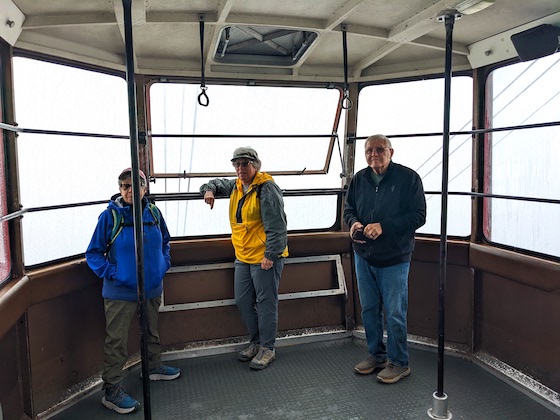 The tram was nearly empty. It was just these three tourists, Frank, the tram operator, and me. It was low visibility as you can see.

Once we got off the tram at 11:30 AM, I immediately stepped out onto the deck at the northwest corner of the large tram building. It’s adjacent to the small cafeteria and is a wonderful place to enjoy a meal looking out to the Great North Woods. I wanted to see if the picnic tables were dry. Remarkably, they had no dew on them allowing us to sit on dry seats and keep our expensive equipment out of the water.

Frank suggested we get a cup of coffee to offset the little bit of chill. The temperature was probably hovering around 48 F when we got off the tram. I didn’t think to check, but the tram operator said it was almost always 12 degrees cooler up top than down at the parking lot.

Just before noon I could see tiny patches of blue sky out the cafeteria windows. The sun was gobbling up the clouds. Hooray! 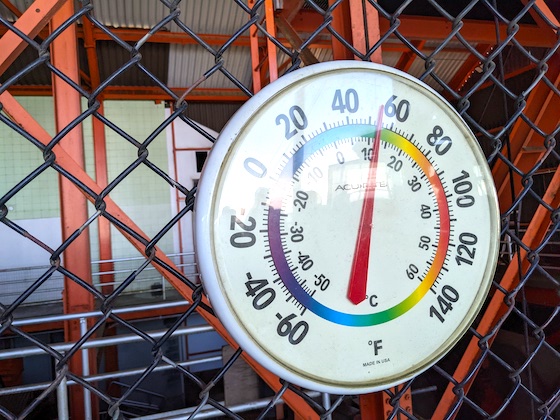 It was 54 F as we were about to load to go back down. We had been up on the mountain for three hours so you know it was cooler at 11:30 AM when we arrived.

Get Frank on the Air

Frank and I exited the cafeteria out onto the deck and started to set up. Just the day before he and I had tested my Elecraft KX3 ensuring it could interface with Frank’s laptop to do digital radio. I had to buy a few special cables to make the magic happen.

Within minutes we had deployed my 14-foot collapsing fiberglass fishing pole that would hold up the center of a 29-foot thin wire creating an inverted V antenna. I connected my 9:1 unun to reduce the impedance of the wire allowing the KX3’s tuner to give us a 1:1 match with ease. I jammed the fishing pole in between the deck railing balusters to keep the pole upright. A BioennoPower 6 Ah LiFePh battery powered the KX3. 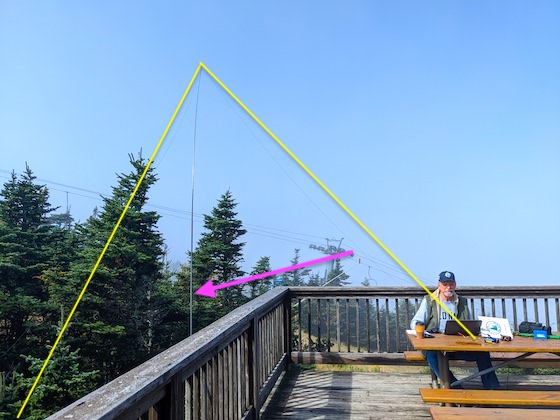 This was our wretched antenna. It worked. The magenta arrow points to the collapsable fiberglass fishing pole. The yellow lines indicate the thin 29-foot wire that’s almost impossible to see in real life and virtually impossible to see in a photo this resolution. The panfish pole did a great job of holding up the wire to create the inverted V. 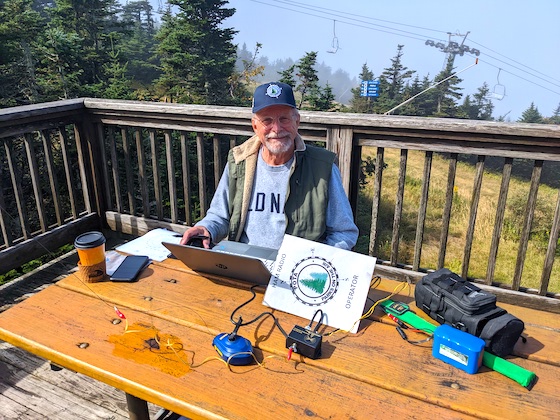 Here’s Frank starting to fill up his log with digital contacts. He loves doing POTA and even has a special POTA hat! You can see by 12:15 PM the sun was eating up the clouds faster than I could gobble down some of the spicy chili served up in the cafeteria. Check out the photo below of the delicious chili.

Once Frank was all set up, it was time for me to hike a short distance to try to do CW. Jim Cluett, W1PID, and I had great luck in the past sitting on granite alongside a trail that heads down to Franconia Notch. I tried to locate it, but had no luck.

I found a spur trail that had stunted 5-foot-tall evergreen trees along each side. All I could do was lay another 29-foot wire along the tips of the branches hoping for the best. I had my KX2 with me so I could operate at the same time as Frank. 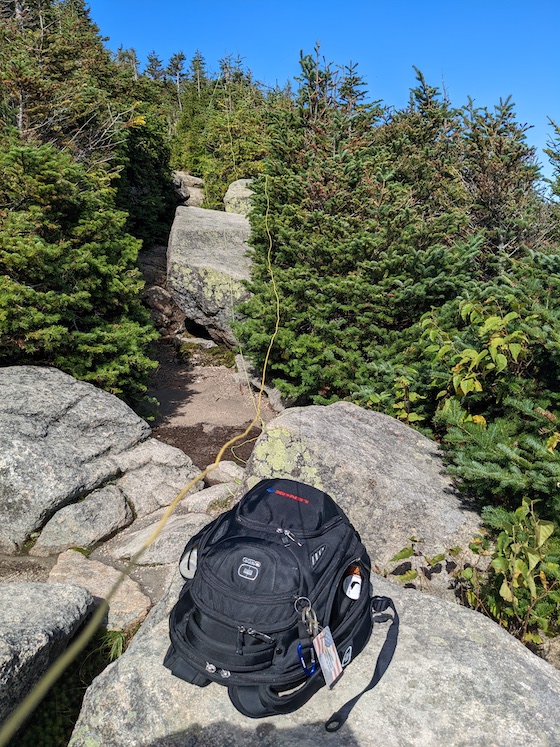 I took this photo just before winding up my antenna. I was very frustrated. Before the adventure I was sure I’d have no trouble making contacts because the 2nd Presidential State Forest had never been activated. While the sun was providing fantastic infrared rays to create sky so blue it hurt your eyes to look at it, it wasn’t putting out enough energy to tickle the atmosphere so radio signals would work well.

I was able to make four contacts in about 30 minutes, then I decided to go back to Frank’s table to try to take advantage of the inverted V antenna.

I packed up my gear and headed back to see how Frank was doing. I was convinced that by the time I got back he’d have 20 or 30 digital contacts. “So how many do you have?”

“WHAT? No way! I thought you’d have at least twenty by now.” I couldn’t believe he had only seven contacts in 45 minutes.

“Well, I was talking with some interested tourists about the radio setup so I may have missed a few contacts.”

I decided I’d eat lunch while he made his required ten contacts, then I’d plug in my micro Palm paddles to try to get the ten contacts I had to have. I had decided I wasn’t leaving the mountain until I activated it! 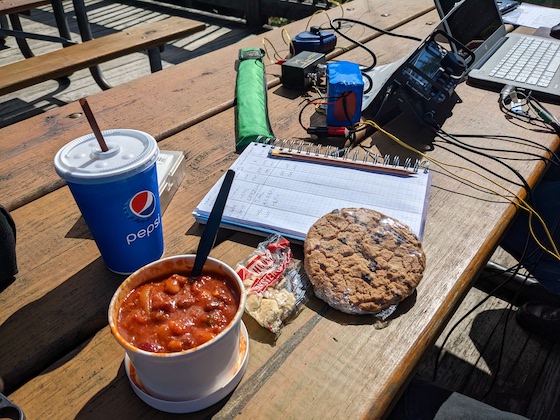 Doing CW Morse code requires energy. The spicy chili was excellent. I decided to eat waiting for Frank to get his minimum ten contacts to activate the three POTA entities. Once I finished eating, it was time for me to get my ten contacts.

Frank ended up with about fourteen contacts and once I got on the air after enjoying the delicious spicy chili, I made eleven total contacts.

It was now about 2:15 PM so we decided to pack up and head back down. Although Frank and I were disappointed we didn’t make more contacts, we were both quite happy at how the day turned out. If you’ve never taken the tram to the top of Cannon Mountain, it’s something you should consider. Rumor has it there’s a stash of gold coins up along the rim trail. 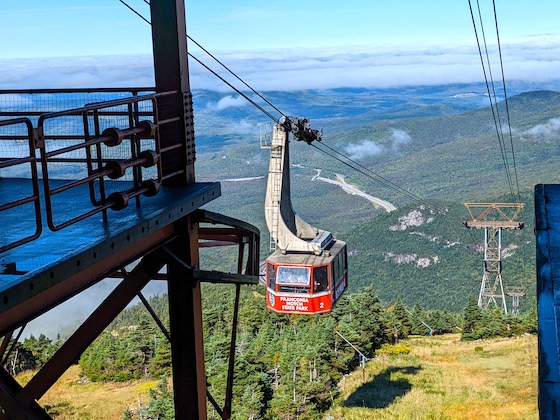 Here’s the tram car arriving that would take us back down to the parking lot. We had a great time and the clouds had almost all disappeared. 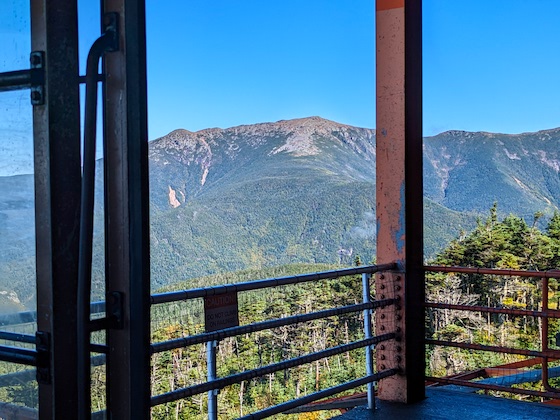 You’re looking at Mt. Lafayette from inside the tram car. It would have been an ideal day to hoof it up that mountain. Soon it will be snow covered. 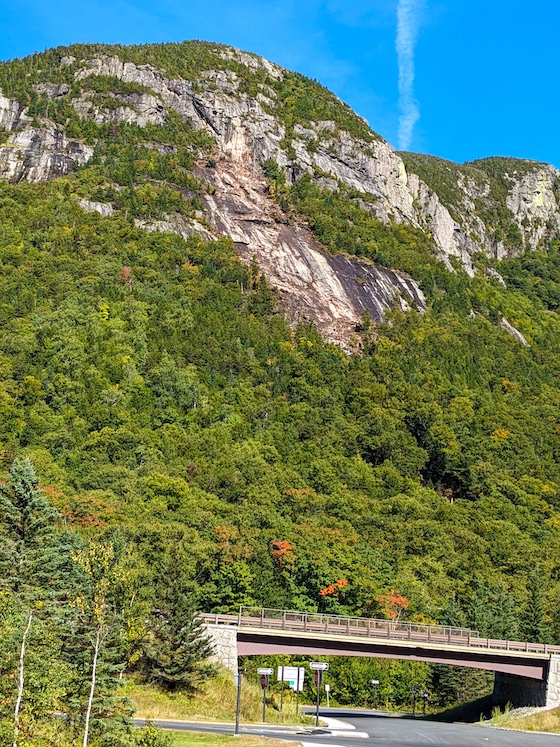 The tram operator pointed out a rock slide that had happened a few days before. It was cloudy and foggy just like today and they heard the avalanche of rocks but didn’t see the aftermath until the clouds had disappeared. Tons and tons of boulders came down. Eventually they’ll end up in the Atlantic Ocean. Geologists like me call this mass wasting.