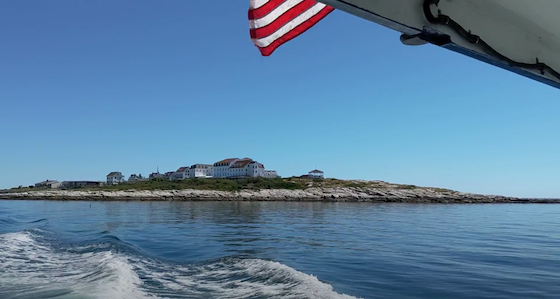 See that gazebo to the right of the hotel? That’s where we set up to snare radio signals out of the air like lobstermen grab tasty crustaceans from the deep blue sea around Star Island at the Isle of Shoals.

It all started four or five years ago when my mentor Jim Cluett, W1PID, suggested we take a day trip out to the Isle of Shoals off the seacoast of Rye, New Hampshire. The plan was to setup and do radio using the saltwater and clear view of the horizon to our advantage.

I’m always up for an adventure but for some reason we kept putting off the trip. Then the I-want-a-redo years of 2020 and 2021 threw a wet blanket on the idea.

But that all changed on the evening of August 28, 2022 when Jim, the master of pith, sent me this communiqué:

I saw this short message the following morning and reacted to it like you’d turn your head to a snapping twig while you were alone in a deep forest.

I responded to Jim via email sharing that Friday September 2nd, 2022 not only was the best day for me, but the weather forecast was beyond superb. What’s more, the regular ferry schedule to and from the island ends after Labor Day which was now a week away. It was fish-or-cut-bait time.

Jim finally said Friday was fine. His lovely wife Judy recommended we charter the trip out of Rye Harbor in New Hampshire on the Uncle Oscar. It was sage advice as Judy is an expert about everything to do in and around Rye. 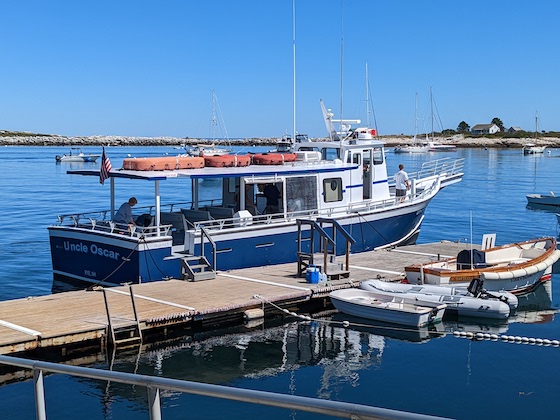 This is the Uncle Oscar boat operated by Granite State Whale Watch that would take us to Star Island.

I went online, bought two of the last ten tickets available, and sent the digital receipt to Jim. A day later we met in person to discuss who was bringing what equipment. The challenge was daunting because:

Jim has operated for decades outdoors. One day a few years ago in a rare instance of bloviating, he said to me, “When you operate outdoors you have everything stacked against you. The weather, a poor antenna most of the time, the possibility of forgetting a key piece of equipment, etc. It could be five times harder to make a contact outdoors than from the comfort of your indoor shack.” I was to discover over the past years honing my outdoor radio skills that Jim was absolutely correct.

Watch this video of our adventure to and from Star Island! 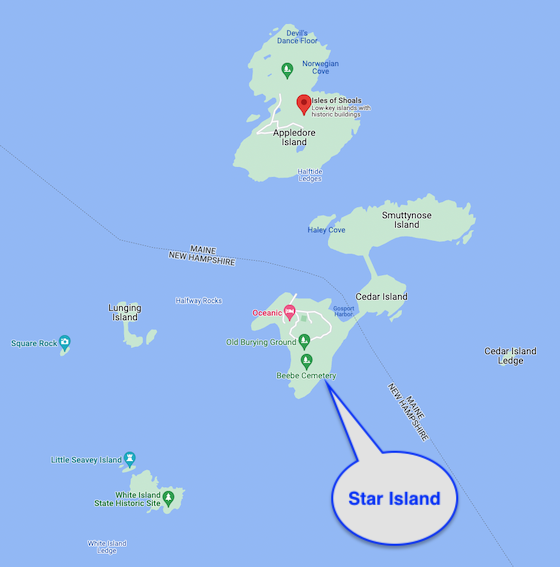 It was decided that I would drive to Rye Harbor for the 11:00 AM departure time. I love to drive so that wasn’t an issue. We arrived at the harbor around 10:20 AM. Soon the wharf was crowded with other passengers, some of which were departing on a whale-watching excursion at the same time as we’d leave for Star Island. The weather was unbelievable. The temperature was kissing up against 70 F and there was no wind. The sea was almost a sheet of glass. 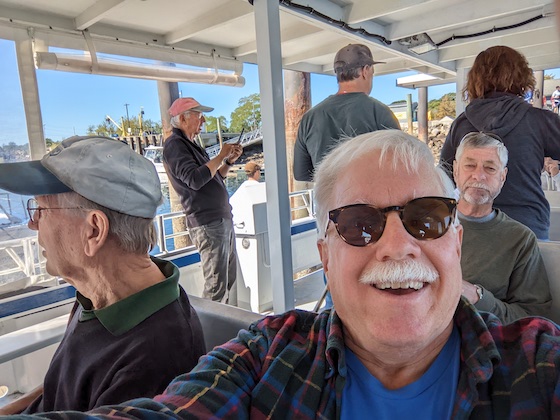 Jim was gazing out the side of the Uncle Oscar. You can see how happy I was to be on the boat heading to Star Island!

The trip out to Star Island was about 45 minutes. Jim’s wife made wonderful no-meat sandwiches us and we transferred them to our bellies waiting for the Uncle Oscar to leave the harbor. As you’ll soon see, I didn’t need to eat. I store about three weeks worth of food under the bottom half of my t-shirt at all times. 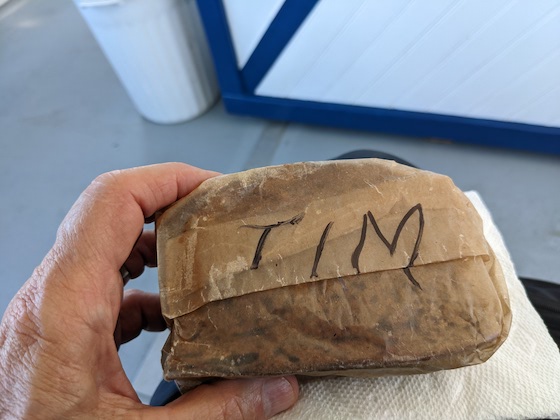 Judy labeled the sandwiches because it was very important mine did NOT have any nasty bitter green peppers. 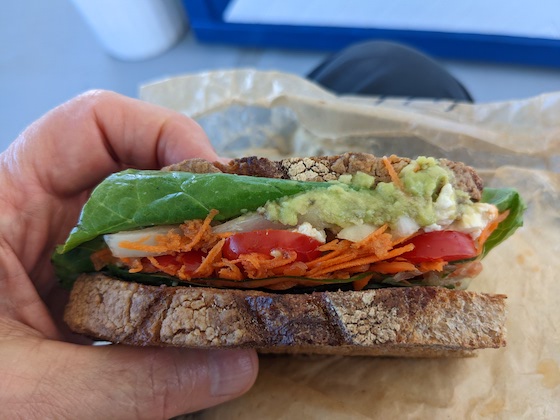 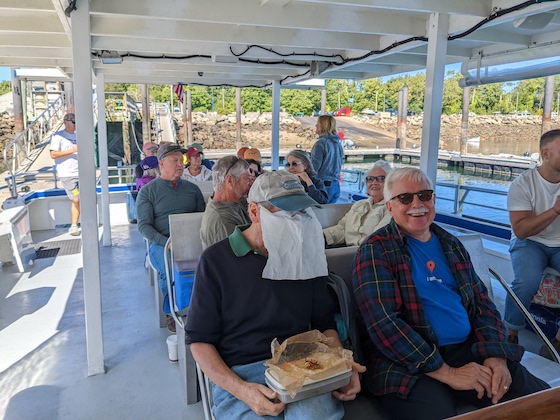 Jim doesn’t like to splatter people with food as he eats. A protective shield made from paper towels is quite effective. The paper towels provide a secondary benefit of privacy to Jim’s absolutely-no-photos-of-me policy.

A different ferry company that hales out of Portsmouth, NH was a bit tardy leaving the dock at Star Island so we had to dawdle a bit cruising slowly by the island just to the northwest of Star Island. There’s only enough room at the Star Island dock for one large boat such as the Uncle Oscar.

Jim and I were itching to get off and as we walked up the aluminum gangplank to the concrete wharf we were contemplating where to set up. There was no time to waste. 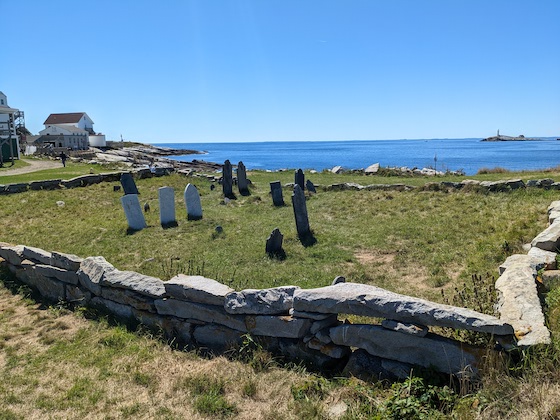 Jim and I passed this old cemetery on our way to the gazebo. I can’t believe you could bury people here with the thin soil cover over the solid granite bedrock.

“Hey Jim, how about that gazebo?” I could see people in it and that would be problematic. People tend to ask lots of questions when they see antennas and hear Morse code chattering from the radio. Today was not the day to give a clinic about outdoor radio and Morse code. No way no how. We had work to do.

For whatever reason, Jim forgot to wear a shirt that would help keep the curious at bay. It says, Get Away From Me. He’s quite possibly the most polite person I’ve ever met.

“There are too many people up there,” Jim said as he studied the 2-ton-capacity crane mast at the end of the wharf. It took us less than 20 seconds to eliminate operating from the nasty wharf. We started to walk to the gazebo as if drawn by a powerful invisible magnet. Time was of the essence.

Jim walked around the gazebo to discover a marvelous teak bench overlooking the ocean. What’s more, it was about 25 feet away from the gazebo. That short distance and our reluctance to give any direct eye contact with those eating their lunches in the gazebo were enough to minimize/eliminate any contact with strangers.

“Listen. We can attach the wire antenna to the corner of the gazebo and then secure it to the bench,” proclaimed Jim. He wasted no time deploying his Packtenna as I got out my Elecraft KX3, my Begali Adventure Key, and a Bioenno Power 4.5 Ah battery. It took just minutes to have all of this connected and the radio turned on. 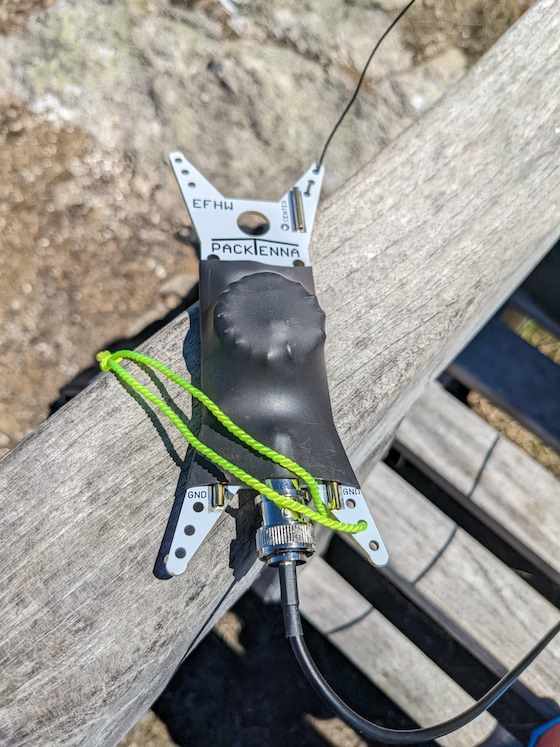 This is the Packtenna antenna.  Electronics are under the stretched rubber. These magic components reduce the resistance in the 29-foot wire. Without them you’d burn up the transistors in the radio. You store the antenna wire on the little X frame. It performed well.

In less than a minute we heard a station on the air. It was go time. We had to be back on the Uncle Oscar in less than an hour.

Switching Back and Forth

I made the first contact. It was with WX1S. We were on 20 meters and the band conditions were poor. That said, his signal to me was strong and he gave me the best possible signal report back, a 599. Jim said to give him a 579 as his signal could have been a touch stronger. 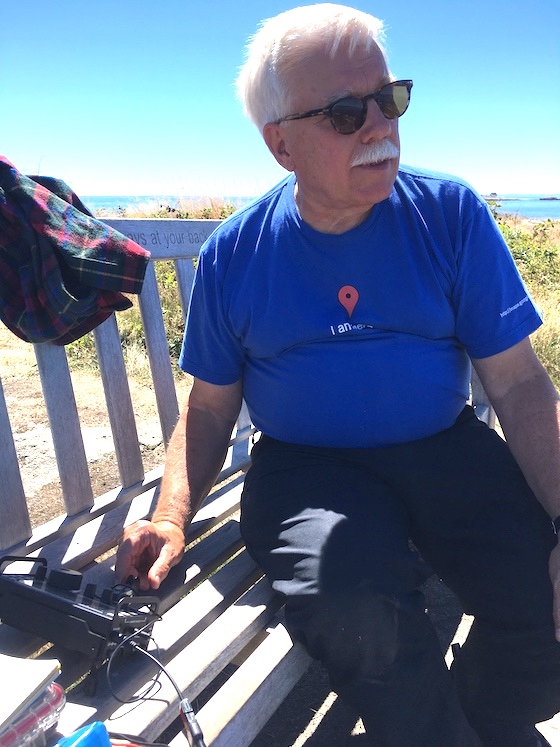 I’ve got my head tilted to better hear the Morse code from the radio. Years of operating circular saws on job sites without hearing protection have played havoc with my hearing. You can see the extra food I brought with me in case I got marooned on Star Island. 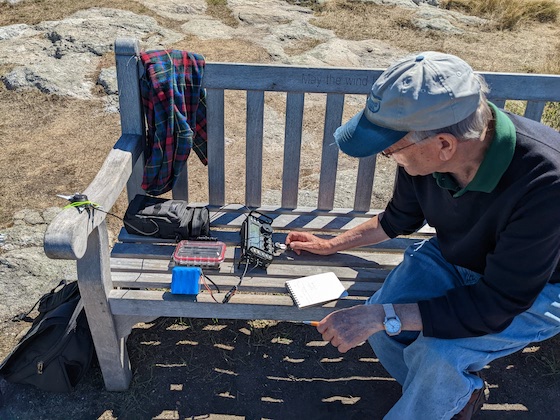 I surrendered the radio to Jim so he could log his first contact. As he was searching for a new operator, a middle-aged man with an official dark-blue Star Island hotel parka walked towards us. In my mind I thought, “Uh oh. The party’s over. He’s going to ask us politely to take down our radio antenna and pack up.”

The visitor turned out to be the CEO of Star Island! He had sauntered out to take a photo of the bench that Jim and I were using as our outdoor radio shack. He was not at all upset and was curious as to what was going on.

While I was chatting with the CEO, Jim made contact with AB9CA. We avoided the skunk, but we both still had a healthy appetite for more contacts.

Moments after the CEO left, Jim made contact with an old friend Pierre, VE2PID. How crazy was that to work a Canadian operator who lives in Quebec with the same suffix as Jim’s call sign, W1PID? It turns out Pierre was operating a remote radio connected to the Internet in Georgia of all places.

Yes, you read that right. Rather than using his own radio at his home, Pierre was using someone else’s radio. You can only accomplish this if you have a valid FCC license.

Once Jim finished saying goodbye to Pierre, I immediately jumped in to get him in my log book. Pierre was surprised to discover Jim and I were together on Star Island.

After I completed my short conversation, we decided it was probably best to break down. We were to be back on board the Uncle Oscar in less than 25 minutes. It made no sense trying to rush to get back on the boat, so we basked in the sunlight and success of making radio contacts from Star Island. It was indeed a highlight of my nine years of operating outdoors.

Jim also brought a small handheld transceiver that’s equipped with GPS. He wanted to see if he could send and receive a signal to an onshore radio station connected to the Internet. Within seconds he was successful. Jim delights at everything about amateur radio, including APRS beacons. 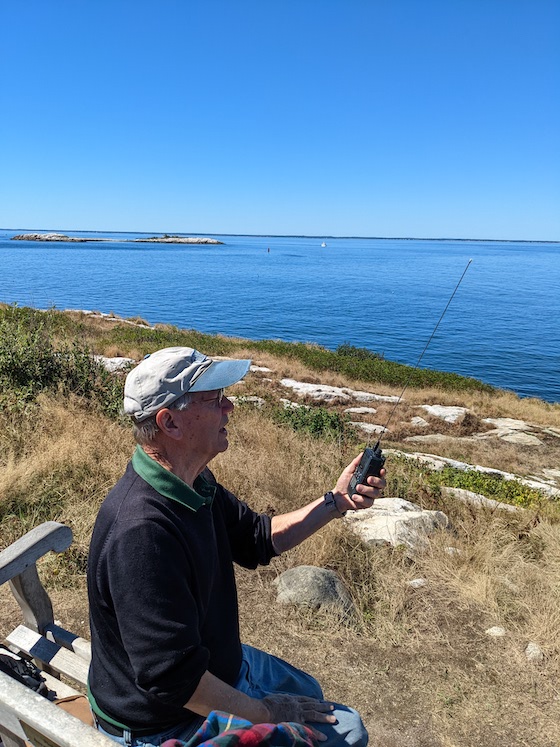 Within a minute of Jim making contact with the radio station, I looked up on aprs.fi to see validation the QSO happened. You can see Jim’s call sign on the island!

After making contact with the radio station, we walked back to the dock. We were one of the first to board. Soon everyone was back on the Uncle Oscar and it was time to depart. Another tour boat from Portsmouth harbor was on its way to take our place.

Jim and I had a fantastic time. I highly recommend for you to go out to Star Island, even if you’re not an amateur radio operator. You can even stay overnight if you want. Rest assured that next summer, the Good Lord willing, I’ll make another trip out to the Isle of Shoals.