I participated in the Skeeter Hunt low-powered amateur radio contest today set up on a 90-acre tract of land I own in central New Hampshire. Well over two hundred radio operators spread across North America, and possibly other countries, had signed up to see how many contacts they could make in just four hours.

I love doing low-stress contests like this. I’ll never forget doing my first Zombie Shuffle and when you read that story, you’ll understand why. Part of the challenge is all the other operators in the contest, including me, must use low power when transmitting. In the hobby, we call it QRP. That’s a Q code for lower your power or should I lower my power? We all use 5 watts or less. This tiny amount of power is all that’s used to produce that soft glow in the incandescent bulb that’s inside the night light in your bathroom or hallway.

The day started out cloudy and cool and it remained so all the time I was out. The temperature made it to 70 F with a dew point of 58 F. It was delightful weather as the previous two weeks had been quite hot and humid for New Hampshire.

Every now and then a grumpy dark-gray cloud would float over and one decided to spit on me about twenty minutes into the adventure. I had decided to just operate standing up by the opened tailgate of my Ford F-250 Super Duty 4X4. 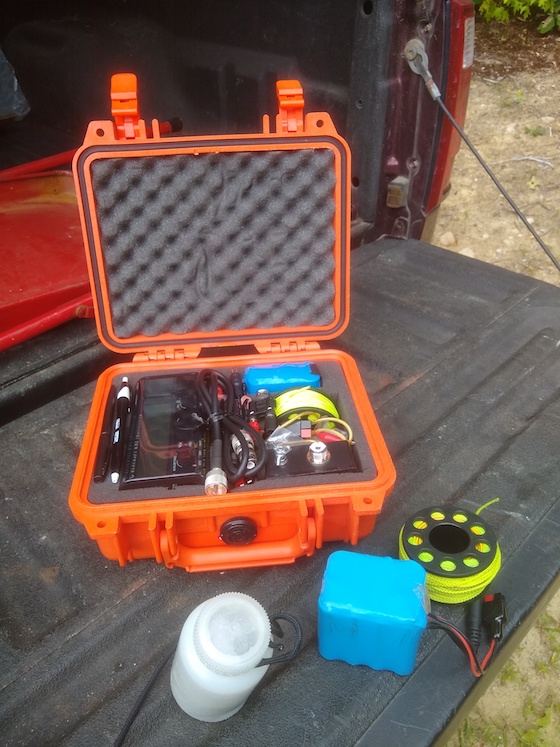 Here’s everything I need to get on the air to make contacts. CLICK or TAP HERE to see how I transformed that Pelican 1200 case into a perfect kit box to safely store my Elecraft KX2 and all the other gear.

I used my standard outdoor radio equipment for the contest. I’ve perfected the storage of the equipment using a Pelican 1200 case and the deployment of my antenna. Here’s what I used to make my 15 QSOs using traditional Morse code:

Several years ago my mentor, Jim Cluett, W1PID, taught me how to get a wire antenna up in a tree in less than two minutes. Here’s the method I use to do it:

I was on the air just after the 1 PM start time and registered my first contact within a few minutes. The sun did a fantastic job today tickling the atmosphere because the moment I turned on my radio and tuned it, I was hearing lots of other operators around the common low-powered watering hole of 14.060 on twenty meters.

I had a great feeling about how the day was going to turn out. I was to discover later that the propagation was so good some operators made 30, or more, contacts. That’s a remarkable number using low power in such a short time. 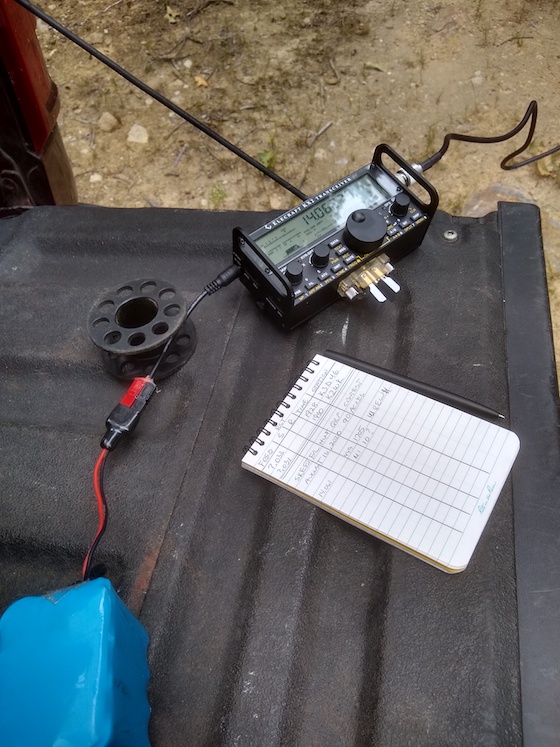 I’m on the air and I’ve got one in the logbook. I then got serious and started to fill up three pages with more contacts.

About thirty minutes into the contest my phone rang. It was Jim! I hadn’t seen him for six months because of the wretched virus.

“Listen, how are you doing? I’ve only made about three or four contacts using a 44-foot dipole in my driveway. Who have you worked so far?”

“Well, I’ve got about six contacts at this point. The bands are pretty good.”

I read off my QSOs and Jim said, “I don’t have any of those! What the heck!”

“Why don’t you just come up here and operate instead of your house?”

Jim lives about six miles away and he decided to come up to the property. It took him about 30 minutes to break down his station and drive to my land. It was really great to see him.

Saved the Best For Last

Jim set up about 200 feet from me and tried to fil his logbook. He didn’t do too well today, but I think he just came up for a change of scenery. I’ve got lots of maple trees on my land and the sap from these trees is the first crop of the season for local farmers and other business people. Some use the nectar to flavor ice cream. But I digress.

Jim wandered down to my location about five minutes before 3 PM. Just then his phone rang and it was a dear friend of his, Carter Craige, N3AO. I had the good fortune to meet Carter back in 2014 at the ARRL Centennial in Hartford, CT. At the time, his bride, Kay Craige, was the president of the ARRL.

Carter had been participating for the first two hours like us and had made a remarkable 33 contacts using a giant loop antenna up 40 feet in a bunch of trees on his property in Blacksburg, Virginia. Some refer to that antenna as an NVIS cloud warmer. Well, it was warming up Carter’s logbook today that’s for sure!

Both Jim and I did a fast exchange with Carter and that was it for the day. It was so very exciting to have Carter in my logbook once more!

Here’s a summary of the stations I made contact with today: