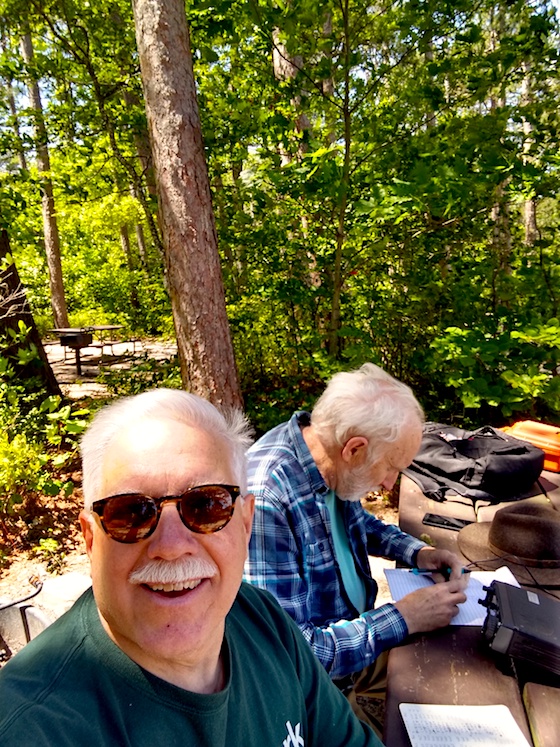 I’m in the sunglasses and Dave Benson, K1SWL, is busy untangling a slew of radio operators eager to contact us at this never-before-activated POTA and WW-FF location. Just 24 hours before, I got a haircut.

The word for the day was windy! Don’t believe me? Watch this short video.

Dave Benson, K1SWL, and I decided to do a Parks on the Air and World Wide Flora and Fauna radio activation yesterday from the beach at Wellington State Park. The designators are: K-2682 and KFF-2682 respectively.

This is a gem of a park on the southwest shoreline of Newfound Lake in central New Hampshire. Newfound is reputed to have the cleanest water of any lake in New Hampshire. The water temperature at the ranger check-in booth said it was 70 F. Dave and I felt that was a stretch and the rangers might want to recalibrate their thermometer.

Here I am trying to get a few extra contacts on 40 meters. You can see the wind doing a number on my hair. The 40-meter band was dead as a doornail. After a few minutes of calling CQ, we packed up and went to get two fish sandwiches!

It’s important to realize this park had never before been activated. The radio operators at home want new parks and you can almost always count on lots of activity for these all-time-new-ones (ATNO) as they’re affectionately known.

I took control of the radio at first at 11 AM, 1500Z, because the past few times Dave has initiated the action. We’ve decided to take turns because you don’t know if the sun is going to tickle the atmosphere so we can hear other operators and they can hear us.

We started out on 20 meters at 14.045. Keep in mind there are European operators wanting to contact us. Late morning on the East Coast in the USA means it’s late afternoon over in Europe so it’s always a good idea to start out on 20 meters before the band settles down overseas.

For each of us to get credit for activating the park, we each needed ten contacts. Things started out slow and it took me seventeen minutes to accumulate one more than was needed for me to activate 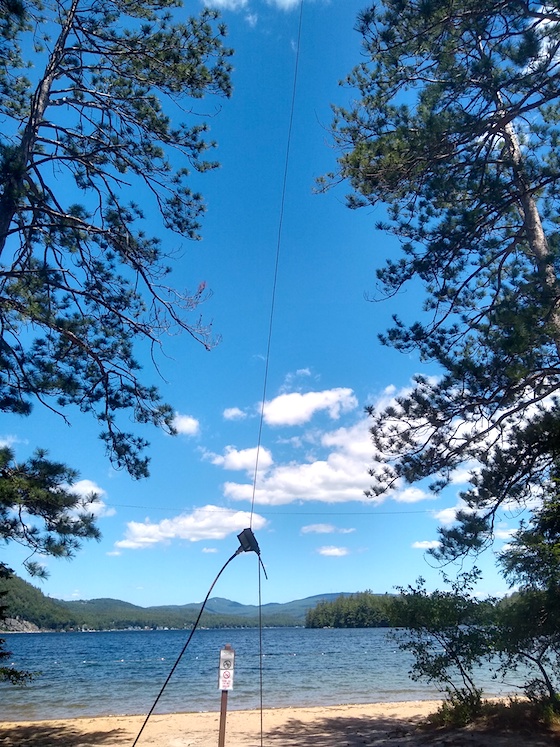 This is the bottom of Dave’s end-fed 20-meter antenna. That box contains magic components that tame the high impedance of the wire. Without the magic box, the radio would create small amounts of blue smoke. Blue smoke is bad.

Once I got to eleven, I said, “Dave, you take over. I want to make sure you get activation credit for this park.” 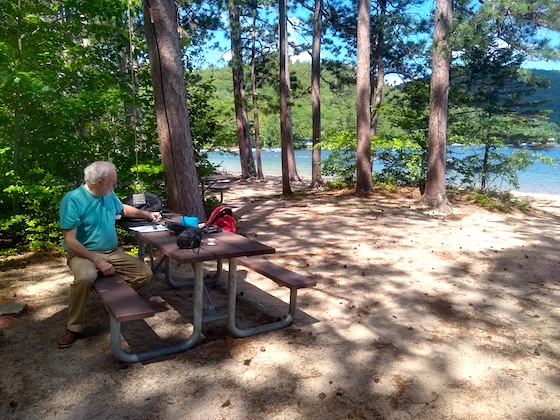 Here’s Dave early in the activation before the wind picked up. Note he’s just in a t-shirt.

After yielding control of the radio to Dave, I texted my very good friends Wayne Reetz, KA1CPR, and Jess Guaderrama, W6LEN. I asked them to spot us even though I was certain the POTA skimmer had already done so. 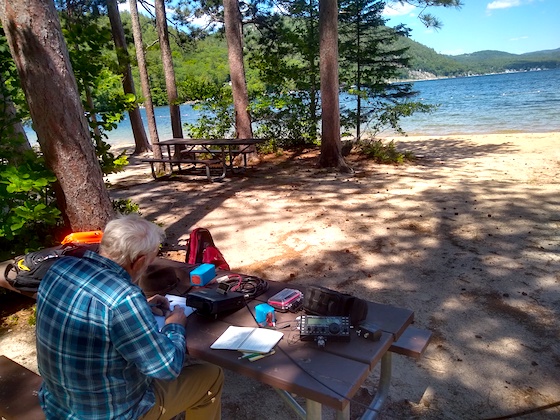 You can see that Dave added a warm flannel shirt as being in the shade with the cold wind blowing made t-shirts not such a good idea!

Moments later all hell broke loose and a scad of operators descended upon us like a plague of locusts. It’s exhilarating to pull out callsigns when everyone is clamoring to be heard at the same time.

Dave filled his log with 31 contacts in 32 minutes. That’s my goal – one contact per minute or so.

After Dave exhausted the demand and the frequency was quiet, I switched to 40 meters on my Elecraft KX3. I only contacted one operator. We decided it was time to eat so we packed up and got some grub.

These activations are fun, they’re exciting, and they really hone your listening skills especially if you want to train to do emergency comms in a hurricane! 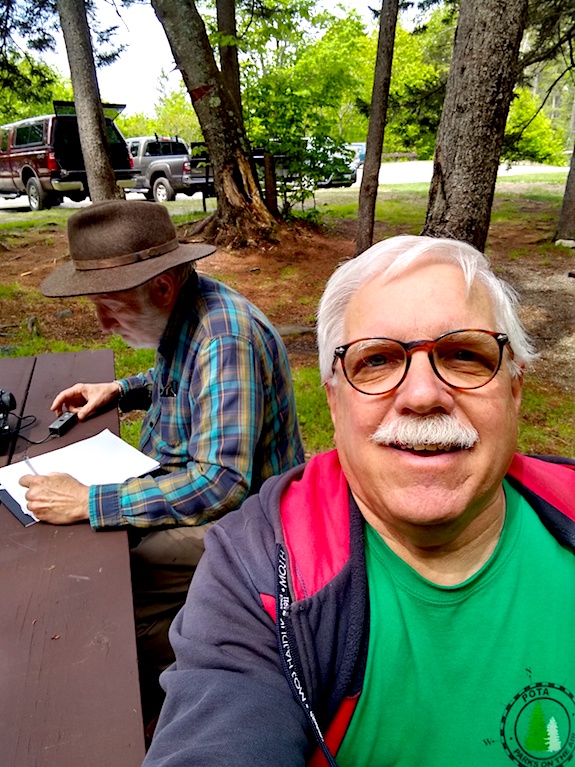 Dave’s busy on the radio and I’m sporting my wonderful POTA t-shirt. More than a few mosquitos wanted in on the fun. We started the activation on 20 meters and then switched to 40 meters an hour later.

We were in Cardigan Mountain State Park in central New Hampshire. This location is both a Parks on the Air and a World-Wildlife Flora and Fauna entity. 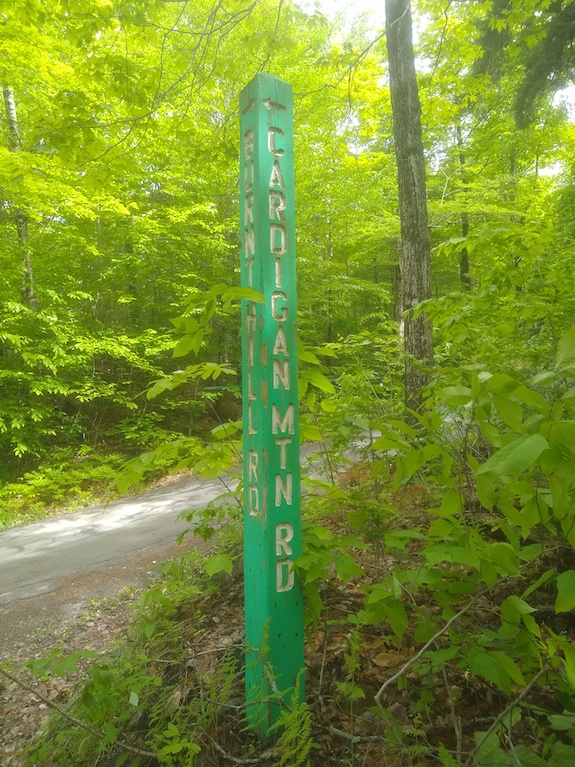 This is the colorful road sign indicating you’ve arrived at the state park.

Dave and I set up on a fine picnic table at the trailhead of the West Ridge Trail that gains about 1,300 feet in elevation in just 1.5 miles. We were all set up ready to talk to other radio operators in the USA and Europe by 10:50 AM or 1450Z. 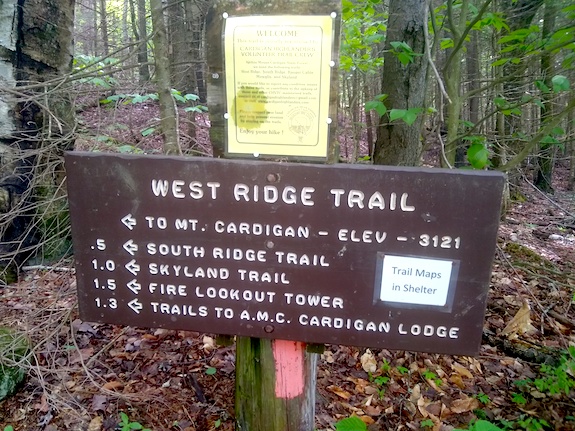 This is the table and the adjacent tree Dave is looking at did a marvelous job of supporting Dave’s resonant 20-meter end-fedz wire antenna.

As long as the ionosphere was being sufficiently tickled by the sun’s energy, we would be rewarded with many radio contacts as this particular park is rarely visited by operators like us that wish to battle the elements and the many NH state birds better known as mosquitos.

I was tutored in outdoor radio by both Jim and Dave and it doesn’t take us long to set up. I threw my water bottle about 55 feet up in the air on the first try snagging the exact branch I was aiming for. It allowed Dave’s antenna to hang straight down. 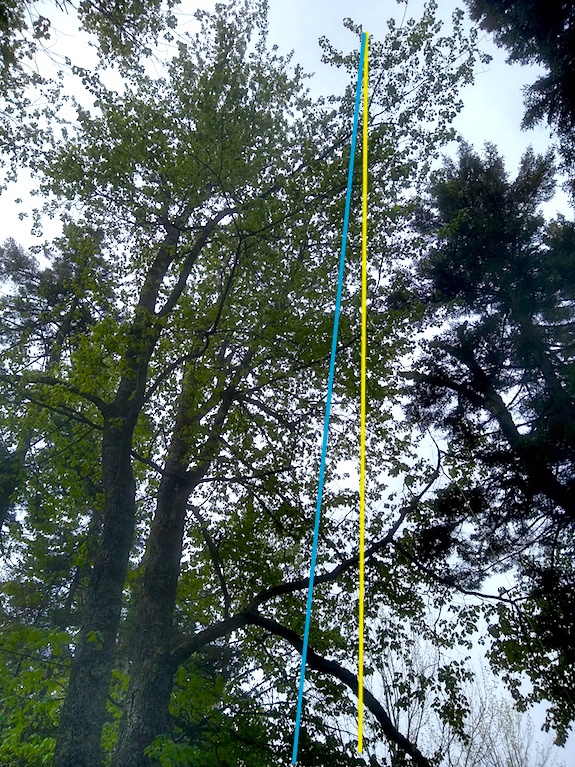 We decided it’s best to tag team the radio instead of trying to have two radios blasting at the same time. The signals from one overload the other. Dave got on the air first and within minutes the chasers were descending on him like crows raiding a cornfield.

Dave’s a seasoned Morse code operator. I believe he’s been doing it for over fifty years. He usually has no issue pulling out a callsign when multiple chasers are screaming, “ME, me, me, me!!!” Watch the video just below and you’ll see that happen when Dave ends a fast report with one operator.

After operating just thirty-three minutes, Dave had accumulated 31 contacts. He then got up and I sat down. Within minutes more chasers were trying to contact me. I proceeded to untangle a very modest pileup with his help. 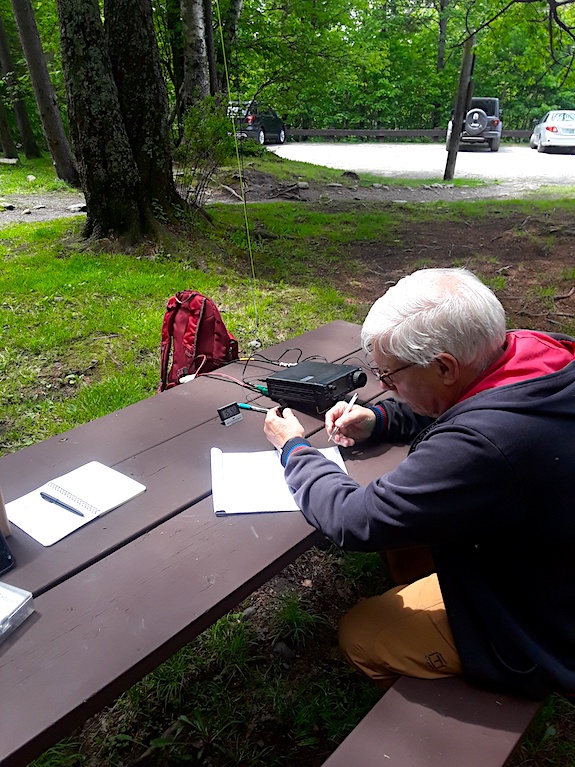 Here I am pounding brass so to speak. Something is obviously wrong with Dave’s camera as I’m certain my bald spot is so much smaller than what you see here.

“Hey, are those my micro Pico paddles?” Dave was making a joke because about three years ago he somehow lost his while operating at Gardner Memorial Wayside State Park near his home.

“I knew I should have engraved my name on them,” I replied. Without some ID like that, it’s pretty much impossible to say who’s paddles they were. We both laughed pretty hard.

I was having trouble sending as the keyer speed on Dave’s ICOM mobile radio was set a little faster than I’m used to. We laughed about that as I called myself a LID. A LID is a derogatory label given to an amateur radio operator who has poor skills.

About ten minutes until Noon, Jim showed up. He didn’t want to operate with us but decided to join us for lunch afterward. We did convince him to try to untangle a pileup that we were positive might happen on 40 meters. 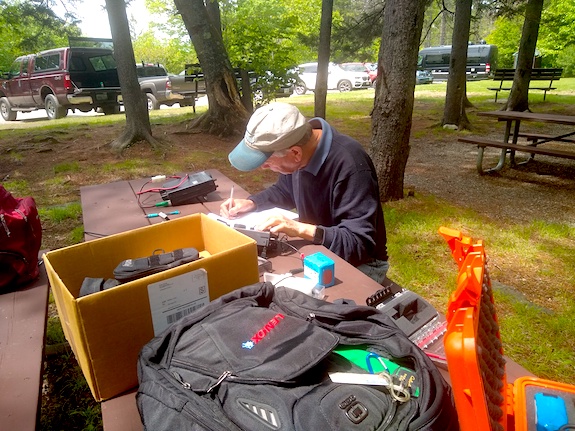 Here’s Jim logging his sole contact on 40 meters. He asked to use my callsign.

Here’s Jim in a better mood. When he first arrived we blamed his mood on driving away all the operators on 40 meters. Who knows, maybe there is a correlation to happiness and having lots of contacts!

It turns out 40 meters was a bust. Between us, Dave and I had gathered fifty-one contacts on 20 meters. Only four contacts were made on 40 meters. It didn’t take long to decide to head to lunch in downtown Canaan, NH. 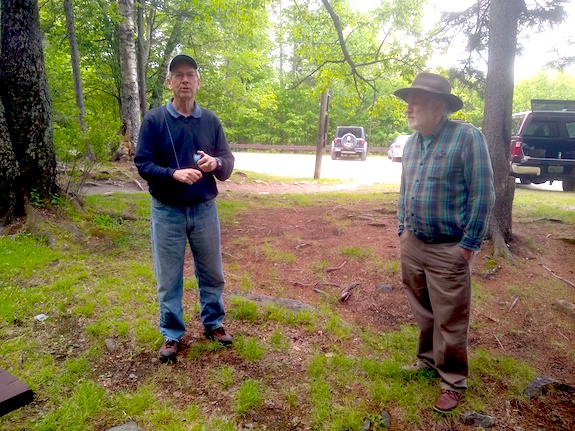 Jim’s on the left winding up my halyard. You’re looking at two iconic Northeast QRP radio operators. Dave is the founder of Small Wonder Labs and the inventor is the epic Rockmite radio. Jim has been my tormentor the past seven years and I’ll be forever grateful for his patience. Moments later we were leaving the parking lot headed for lunch.

Dave headed back home after lunch and Jim and I decided there was time to try to do more radio next to the Pemigewasset River in Bristol, NH. We had spied this location nearly 18 months ago on a cold winter day as we walked down Coolidge Ridge Road. 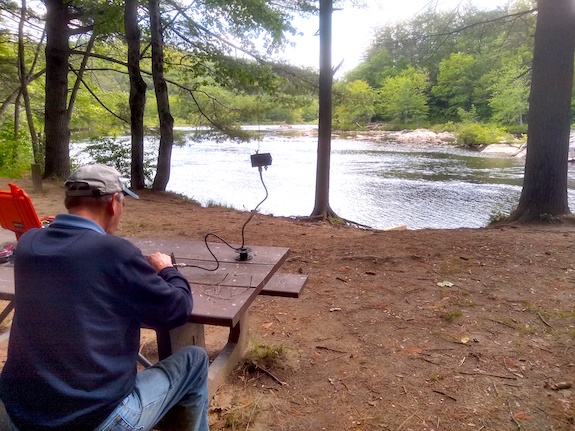 This is a well-hidden location along Coolidge Ridge Road in Bristol, NH.

It was a tranquil location and I know I’ll go back here. The picnic table did have lots of sap on it so I’ll bring mineral spirits next time.

For some odd reason, we decided to take turns operating but used each other’s callsign. It was loads of fun until I sent Jim’s back to one operator as W1PITI.

“What are you doing, you idiot? My callsign is W1PID!” My finger slipped on my Begali Adventure paddles and I put too much space between the single DAH and two DIHS in the letter D. When you do that, you end up sending a T and an I. We laughed pretty hard about that!

All in all, it was a grand day out with two radio titans. I’m blessed to call them friends and they are always ever so patient with my continuing learning process.

We hope to get out again very soon but hope the mosquitos take the day off.