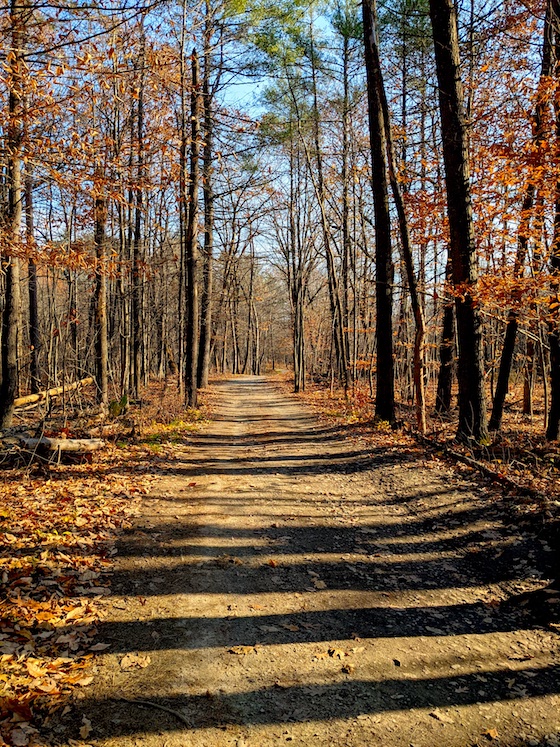 These long deep shadows indicate how low in the sky the sun is. It was just after solar noon when the photo was shot. The winter solstice is sneaking up on us. It will be here in just five weeks. The Pemigewasset River is just about 1/4 mile ahead.

Yesterday my mentor, Jim Cluett W1PID, and I strolled down to the bank of the Pemigewasset River within the US Army Corps of Engineers Hill Village flood-control area in central NH.

The temperature was a stunning 62 F and brilliant sunshine washed over us as we tried our luck at snaring contacts out of thin air. I call them Qs for QSOs. QSO is a Q-code that means I can communicate clearly with another operator. We were not to be denied.

I arrived at the parking lot across from Profile Falls in Bristol, NH before Jim. There were two equestrian women there taking advantage of the balmy weather prize Mother Nature had delivered to us. “My that’s a beautiful horse,” I remarked. The owner said, “I saw him born eighteen years ago. His mother was my horse too.” 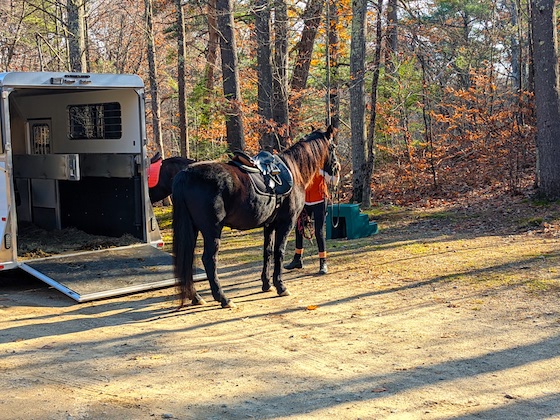 What a beautiful boy! Eighteen years old. I wish I had brought an apple or two or three.

Once Jim arrived, we put on our backpacks and started to head to the river.

“I don’t want to be in your story.” Jim is a pretty private person.

“You’ve got nothing to worry about. I’ll be sure to leave you out. Besides, no one reads my blog posts anyway. I’m not popular like you are in the QRP community.” I retorted. 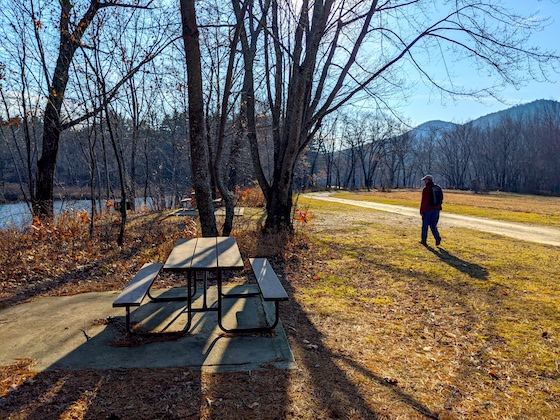 Jim is about to set up at a different picnic table. It was such a warm day. Within a few minutes he’d take off that light jacket.

Upon arriving at our usual operating spot on the west bank of the Pemigewasset River, I proceeded to make a fool of myself. I was pulling my 29-foot antenna wire up into the giant pine tree and like a dolt, I pulled it too far. I had failed to connect my 9:1 unun and coax cable to the end of the wire before tugging on the halyard.

The wire was dangling about ten feet off the ground. Helplessly hoping, I struggled for five minutes swatting at it with a broken pine branch hoping to put it down to where I could snare it. It was futile. I had to start all over. The entire fiasco ate up ten valuable minutes of air time. 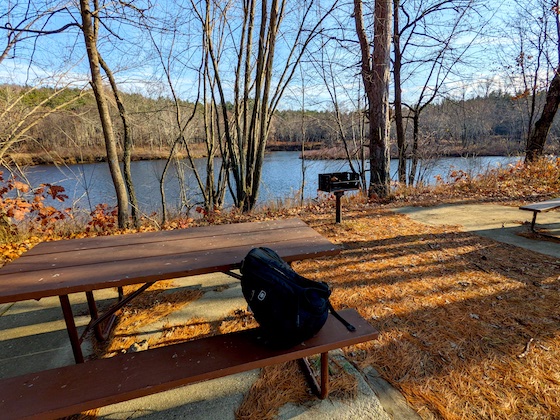 This was to be my corner office for the next hour. It was so warm in the sunlight!

“I’m using 40 meters,” Jim exclaimed. I took that to mean that it was off-limits to me as I might interfere with him. It turns out it was just the opposite as he decided to do a digital operation. Usually, that means his computer is constantly transmitting fouling up the ether on that band. I judiciously decided to start on 20 meters. There were quite a few signals to choose from.

Within a few minutes, I had my first contact in my logbook. EA1DAV in Spain. Jesus was just interested in a signal report and was putting contacts in his logbook as fast as you’d fling popcorn in a pond to a flock of hungry ducks. 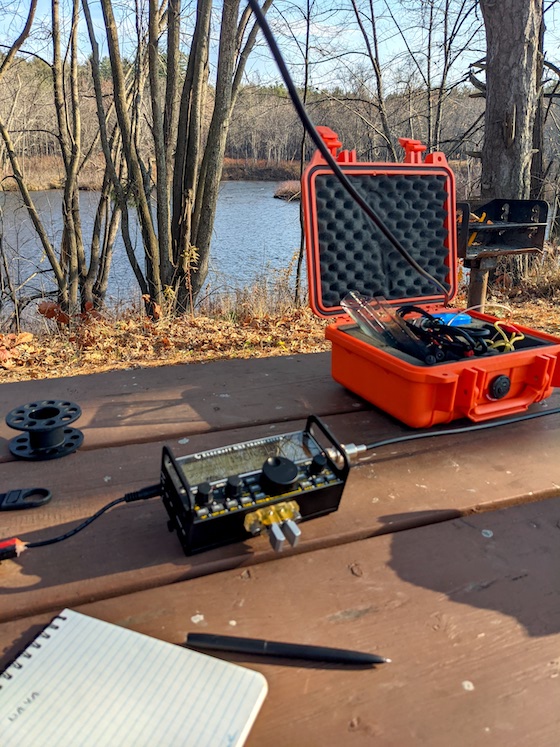 I decided to go with my Elecraft KX2 on this outing. It fits nicely in the Pelican 1200 case. I used the Elecraft paddles too even though my Begali Adventure Paddles were in my backpack.

I then made contact with WK4WC. He was doing a Parks on the Air (POTA) activation. I then heard a strong signal from NK8I, but he didn’t hear my meager 5-watt signal.

Such is the life of a QRPr! QRP is a Q-code that stands for lower your power. It’s also a moniker for radio operators like me who try to do Morse code with only 5 watts, or less, of power. 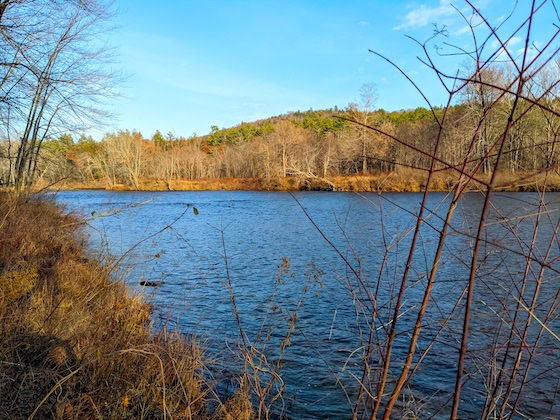 You’re looking upstream on the Pemigewasset River in Bristol, NH. It’s a great river to do a canoe trip, especially if you want to get home around midnight.

I then snagged another POTA operator, K4NYM on 17 meters. I don’t usually hunt for signals on that band but decided to do it since 40 meters was off-limits.

I then went back to 20 meters and heard YO8SBQ calling CQ. He was so strong! “Oh, I’ll get him for sure!” I thought. Well, I sent my call sign six times and he never heard me. It would have been really nice to get Gica in my logbook. He was calling from Romania.

Last up was WB9HDS. Believe it or not, he was doing a POTA activation as well. POTA has become extremely popular. I decided I had enough and started to pack up my gear. I had been on the air for nearly 45 minutes, but it felt like five. 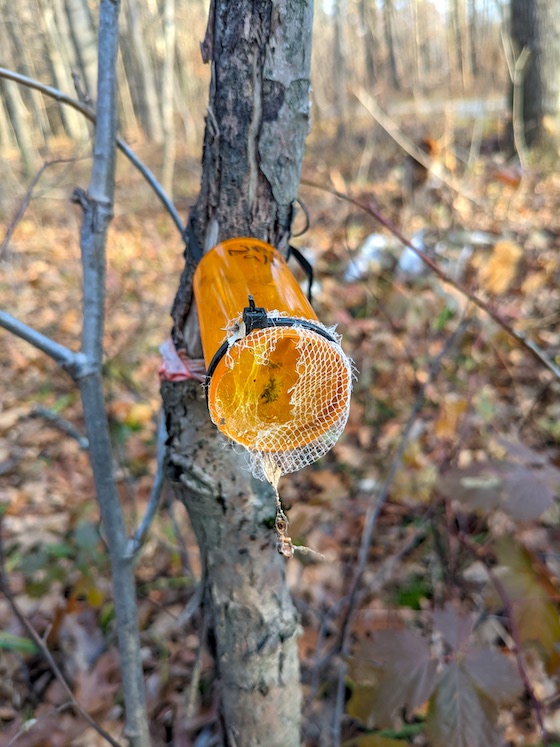 I spied this insect trap on the walk back from the river. It was put there on purpose for some study no doubt.

It’s a short 1/3-mile walk, if that, from the picnic tables to the parking lot. Once there we exchanged goodbyes remarking once again how nice it was to be in the warm WX. I had to scurry home to be a guest on a live radio show on WLIP in Kenosha, WI.

November in New Hampshire usually means bone-chilling rainy days as the welcome mat for Old Man Winter is put out and swept off. Yesterday might have been the last delightful outdoor warm day of the year. As Kenny Chesney sings, “…only time will tell, but it ain’t talkin’.”