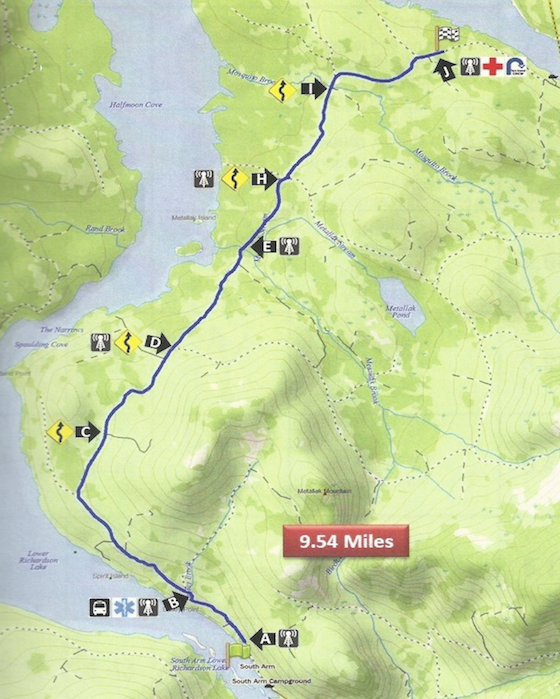 This is the actual South Arm racecourse. The black letters A-J are radio operator positions.

The South Arm and Icicle Brook stages of the New England Forest Rally (NEFR) present challenging communications issues for radio operators. The communications for this gravel-road racecourse have been done for years using 2-meter simplex. This radio frequency is considered very high frequency (VHF) as it’s in the 144-148 MHz part of the radio spectrum.

This racing event features powerful cars that go very fast. Drivers, their support teams, and spectators rely on lightning-fast communications during the event.

It’s important to realize that when one radio operator transmits during the rally, it’s imperative all other operators on the course hear that transmission.

The relay system works because the 2-meter signal can slip through the notch on the east side of the tiny mountain. Look at the topographic map below and you can clearly see how there’s a direct pathway between the start and the relay operator’s position. However, relaying messages slows things down and it becomes a huge handicap in an emergency.

I was asked to take over the chief of communications for the NEFR beginning in 2018. It was a baptism by fire and I had never even been to South Arm before. The leadership of the rally told me they’ve always had comms problems at South Arm and once I arrived I could see why. There was a formidable small mountain in the middle of the racecourse. The radio frequency, 2 meters, they had been using for years doesn’t play well with mountains!

If you want to get over mountains with 2 meters, you need antenna height and power. This was emphasized by Dale Clement, AF1T, who is one of the top VHF and UHF antenna experts in the Northeast. I called Dale in September of 2018 to ask for his help to solve the issue at South Arm.

Dale said, “Tim, when it comes to 2-meters, it’s all about power and altitude. Get people using 50 watts and get antennas up in the air as high as you can to have the best chance of hearing and being heard.”

Many NEFR volunteer radio operators in the past only had Technician privileges and radios that could primarily transmit and receive on 2 meters. It was time to try a different approach. After the 2018 rally, I conducted an exit survey and discovered most of the operators had no high-frequency (HF) experience.

I decided it was time to recruit some experienced HF operators who would work with me to solve this communications conundrum. It’s imperative that the problem be solved because the NEFR is a world-class event with some drivers coming from different countries to race. We must provide a reliable communications system for them, the race teams, spectators, and all volunteers.

Believe me, bad things can happen during the NEFR. Watch this video to see why we need to have reliable communications:

What is the Primary Problem?

Look at the topographic map below and pay attention to the steep hill/mountain inside the red circle. The top of it is 1,200 feet higher than the roadway at the start and finish of both stages. 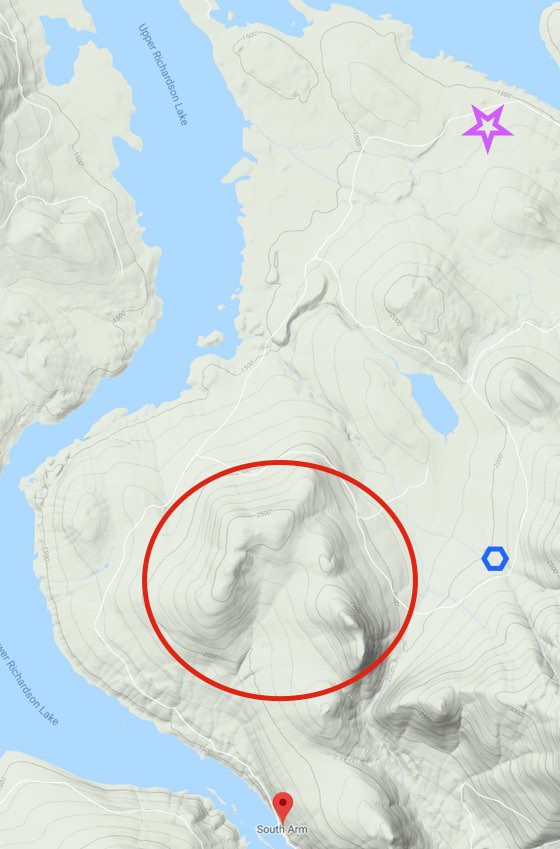 This map includes the South Arm and Icicle Brook stages of the NEFR. The red balloon at the bottom is at the approximate start of South Arm and the finish of Icicle Brook. The purple star is the finish of South Arm and the start of Icicle Brook. The blue hexagon is an ideal location for a radio relay position. The red circle identifies the wretched mountain that tops out around 2,700 feet above sea level (ASL) while the stage roadway hovers around 1,500 feet ASL. Do you think for a moment a 5-watt HT has a chance to conquer this conundrum? Copyright 2019, Google, Inc.

What Can Be Done to Ensure Clear Communications?

You need a tall antenna and lots of power to get a signal from the start to the finish if you intend to conquer the mountain using simplex VHF transmissions. The distance between the start and finish as the crow flies is just under ten miles!

A repeater could be located across Upper Richardson Lake about 2/3rds of the way between the start and finish of the two stages. At this location, it would have a very clear shot of all radio operators along both stages. The tall mountain would not hinder communications whatsoever.

You can also put a repeater in a circling airplane or suspended from a tethered balloon. Both of these options create their own set of very specific problems, not the least of which is cost.

Are Repeaters the Answer?

There are other significant issues with repeaters. Here are but a few of the challenges:

Repeaters offer up a sole point of failure. If the repeater fails during the stage no one can communicate. With the current simplex setup, if one operator’s radio or antenna fails, only his position is affected. The Southern Ohio Forest Rally had a disastrous communications failure while using a repeater in June of 2021, that created mayhem.

Duplexers can be sensitive. They are required in a repeater to make the same-band repeat magic happen. These cans usually don’t like being bumped around traveling on gravel roads that have more potholes than Dunkin has doughnuts.

The provider of the repeater has to set up the repeater, controller, duplexers, etc. as well as the antenna in a short amount of time before the stages run.

The repeater location across Lake Richardson may not be accessible just before the rally. The roads may get washed out and the owner of the road may not repair it in time nor want to invest the money to repair it.

The repeater location at the top of the mountain in between the start and the finish has no road, no trails, and it’s extremely tough hiking with all the needed equipment. Keep in mind the need for the repeater is but six or seven hours. The people working this event are unpaid volunteers and to expect someone to backpack all that gear up to the top of the mountain is a lofty expectation!

What About an HF Solution?

Yes, you might have great success using high frequency (HF) on 80 meters. It’s even possible to get a NVIS signal on 40 meters. All operators would have to have HF equipment and be able to deploy an 80-40M Near Vertical Incidence Skywave (NVIS) antenna.

The US military relies on NVIS operations in battleground situations. It’s that reliable.

A NVIS antenna can be just a simple thin wire suspended about 4-8 feet in the air. You can drape the antenna over tree branches or bushes. You can also use some simple wood stakes or inexpensive fiberglass electric-fence posts to hold it above the ground. I recently switched to these fiberglass poles/posts and they’re excellent.

Here’s a video I recorded in August of 2019 showing how easy it is to build and deploy this antenna. NOTE: This antenna set up flies in the face of the optimal theoretical antenna design created by fancy software. Realize that this antenna you’re about to see works VERY WELL. I urge you to try it yourself. You’ll be amazed that it works.

Ten meters is a very strong candidate to solve the vexing issue. It’s very close to the citizen’s band (CB) of eleven meters. This band has a respectable pedigree for traveling 30 to 50 miles out in the open plains. With altitude, it can go even farther.

The other benefit is the antenna is so much shorter. You can create a vertical center-fed dipole that’s just 16 feet 4 inches long! You can hang this from a tree with little effort.

Finally, those who only have Technician privileges can operate in the ten-meter band. This means any NEFR operator with a 10-meter radio can be assigned to the South Arm and Icicle Brook stages.

On October 10, 2020 I went to South Arm with four other seasoned radio professionals who have worked South Arm before to test both 10 and 80 meters. The test was a stunning success. CLICK or TAP HERE to read about it and listen to the video recording of the actual test.

UPDATE: July 22, 2019 – On Friday, July 19, 2019 I did an 80M NVIS test at the start and finish lines of this stage. I was assisted by Sean Tarbox, N1BOX, and Tim Foy, W1FOY. Sean and Tim, along with Tim’s wife Monica, were just below the start of the South Arm start line. I was a mile beyond the finish line of South Arm.

We established crystal-clear comms using a simple antenna that was about 2 feet off the ground at my end. I was only transmitting with 13 watts out of my Elecraft KX3. Sean and Tim experimented with different power levels up to 50 watts. At 50 watts it was if they were standing next to me. A stunning 5-9 signal report.

Watch these videos to get an idea of how easy it is to do NVIS comms:

If you have ideas, put them in the comments below.