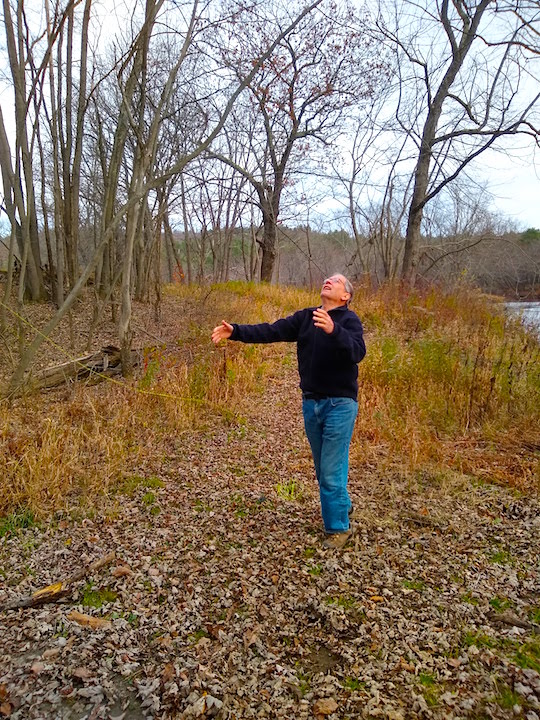 Here’s Jim praying for great band conditions so we don’t get skunked. Doing outdoor low-powered radio when sunspots are taking a nap makes it challenging to fill a logbook. Actually, Jim had just launched his water bottle into a tree adjacent to the picnic table we were using.

Jim Cluett, W1PID, and I took a walk down to the banks of the Pemigewasset River this afternoon. We were parked at Profile Falls, a recreation area under the supervision of the Corps of Engineers just south of Bristol, NH.

The day started off with a magnificent sunrise and when the adventure plan was hatched just after 8 AM we had both hoped that the day would remain sunny. 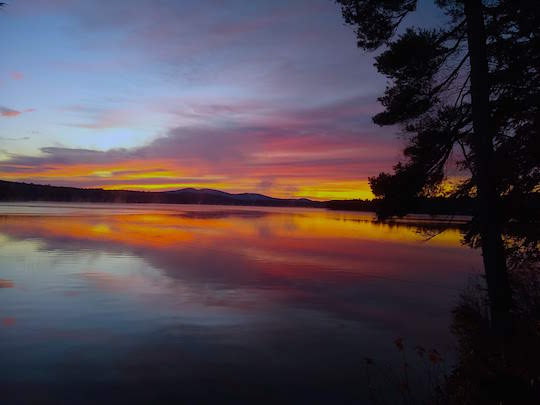 This is the dreamy sunrise I captured this morning sitting alone at the top of the stairs above my dock on Lake Winnisquam. It’s hard to enjoy these sunrises alone.

The weather was cool but not cold. There was nary a puff of wind which can cut like a knife this time of year. It definitely wasn’t scarf weather. That’s just a few weeks away as November in New Hampshire can come in like a happy baby goat, but leave like a honey badger that hasn’t eaten in a week.

As Jim started to unwind the string from his reel to get his antenna up in a tree, I wandered to the shore of the Pemi as locals call it to listen to the tumbling water and enjoy the glistening diamonds on the water as I faced southwest. The day had become a light overcast so there was enough sun to grace the fast water with countless glittering diamonds. 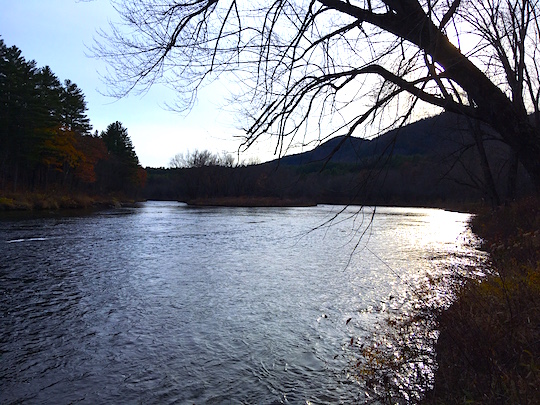 It was a diamond day next to the Pemigewasset River. I’ve heard different translations for this Native American river name and don’t quite know which one to believe.

“Do you think the ragged bark on that branch is going to cause problems?” Jim has so much experience launching his nalgine water bottle to get a string up and over branches, so I didn’t understand why he was asking me.

Up his water bottle went, but it didn’t want to come back down to the ground without a fight. It took about three minutes of tugging back and forth before it dropped far enough where I could grab it with my hiking pole while standing on the picnic table. At least I didn’t have to put Jim on my shoulders as happened last winter at Potter Place!

We got the 29-foot wire attached to Jim’s 9:1 unun which he connected to his Elecraft KX3. A dandy BioennoPower 3 Ahr NFP battery provided the needed electrons into the miserly Elecraft radio allowing us to capture and send the invisible happiness waves.

Here’s Jim finding the SOTA operator. It’s like being at a church carnival when you spin the VFO knob on a radio. You never know what prize you might win!

Jim at first heard another operator who was on top of a mountain trying to activate a Summits on the Air (SOTA) mountain. He decided to send out a rare CQ call to attract other operators who were trying to contact the SOTA operator. After sending CQ for a painful 45 seconds, maybe more, Jim gave up. Patience is everything when it comes to low-powered radio operations I’ve come to discover.

Soon Jim found a really strong signal where one operator was talking with another. In these situations, you need to be polite and wait until the conversation is over before you call the operator.

“What good is a strong signal if he’s writing a novel!” Jim said exasperated after waiting about 30 seconds for the conversation to end. It was time to spin the VFO knob once more for a prize.

Not too long after this Jim found Paul, KW7D in New Mexico who lives somewhere out in the woods. Paul and Jim had a somewhat long conversation and that allowed Jim to avoid the wretched skunk. No one likes to go do outdoor radio and not make at least one contact. 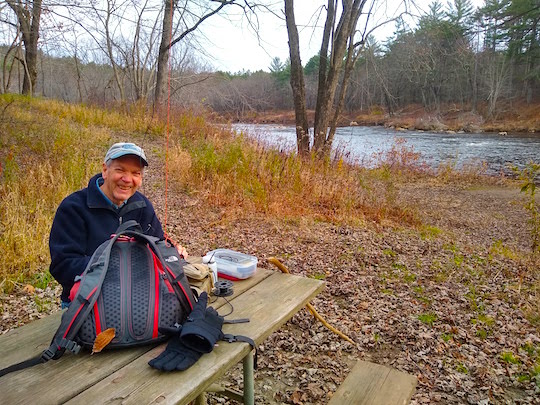 This is what happens when Jim makes a QSO with another operator. Can you feel his happiness? I’ve been the recipient of this long-distance endorphin injection! It’s bliss I tell ya!

I decided to capture part of Jim’s conversation using the video software on my Moto G7 smartphone.

“I got some great video,” I told Jim.

“We’re not putting up any videos.” Jim hates video more than getting skunked.

Too bad Jim doesn’t know the code to break into my phone. Here’s the video I shot of part of Jim talking with Paul:

After signing off, Jim handed me the tiny Pico iambic paddles so I could add Paul to my logbook. Paul must have been running automagic software as the instant I sent my callsign he came back, “Great to hear you, Tim.” 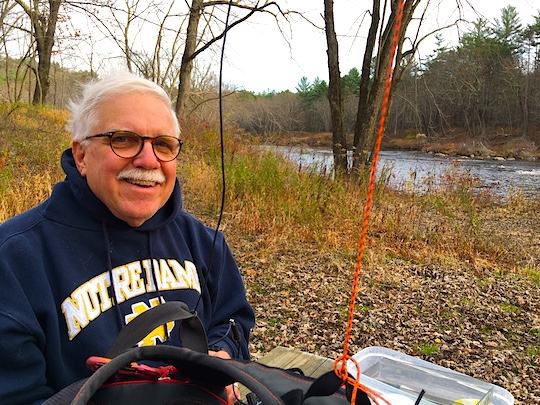 Here I am talking with Paul in New Mexico. Why yes, I did take a shower today and my hair was combed this morning, thank you. I happen to love tousled hair!

I did a fast exchange with Paul telling him I was with Jim and we were on a hike next to the Pemi River in New Hampshire.

Today I was in a really happy place and when that happens, the sarcasm between Jim and I ratchets up two or three levels. 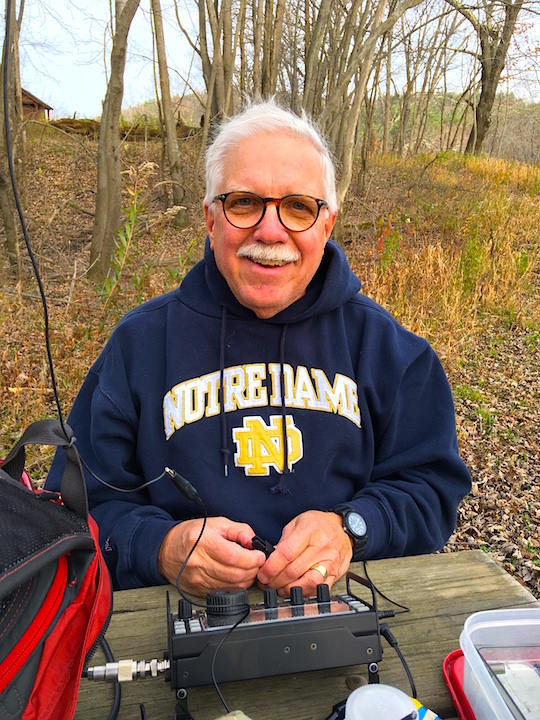 I’m pretty happy but would have been happier if Jim had told me my hair was all tousled. I wonder how that happened?

After signing off with Paul, Jim tried to find a few other stations but gave up after two minutes or less. It was time to walk back the half-mile to our vehicles and head to Dunkin’ for a cup of coffee.

“It’s nice to walk on the ground.” Jim stopped and spoke looking down at the dirt road carpeted with brown leaves.

“Soon we won’t see it until April.” He finished. Jim’s right. Any week now the first full-cover snow can happen and you won’t see the ground or tread across it until the sun climbs high enough in the sky so Mother Nature can send the frozen water to the fish and lobsters in the Atlantic Ocean.

We had a really fun afternoon adventure and my only wish is that you could join me one day to hear the Pemi as it talks to you. It’s magical.