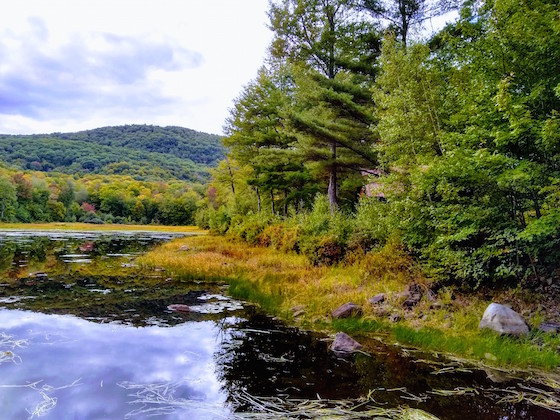 This is the well-hidden gem of Dearborn Pond in Sanbornton, NH. I recommend you do your best to avoid it. I saw very large hoof prints of a giant mammal just below where I took this photo.  You’re looking northwest at a southeast-facing flank of Hersey Mountain. Copyright 2019, Tim Carter

“I’ve not yet done my required walk today, so that’s number one on my list of things to do,” I said as I answered Jim’s phone call.

“Listen. Let’s go hike up to Dearborn Pond. It’s the perfect length and I’ve not been there for going on ten years or so. We can do some radio from a cabin up there.”

That was the proposal my good friend Jim Cluett, W1PID, made to me mid-afternoon yesterday. I accepted his proposition as I had not been to this heretofore unknown oasis. 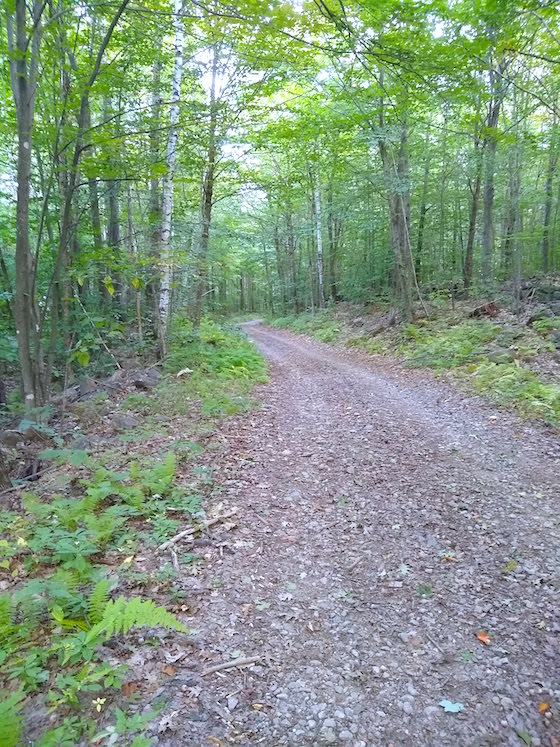 This is a section of the Class VI road you wander along to get to and from Dearborn Pond. The Town of Sanbornton NH owns the road, but it’s not maintained. A decent 4×4 vehicle can traverse it in good weather. Snowmobiles overtake the road in winter as they claw their way up and around Mt. Hersey. Copyright 2019 Tim Carter W3ATB

It was about a one-mile hike up a class VI road from where we parked Jim’s paprika-colored Subaru. Class VI roads in NH are not paved and can be almost impassable in good weather because of severe erosion. This particular road was in quite good shape and the vegetation was trimmed so your vehicle wouldn’t look like it had been in a catfight.

Ancient stacked stone walls lined the road as we marched up the steep first section. I constantly marvel at how the homesteaders 160 years ago positioned some rocks that weigh well over 700 pounds. 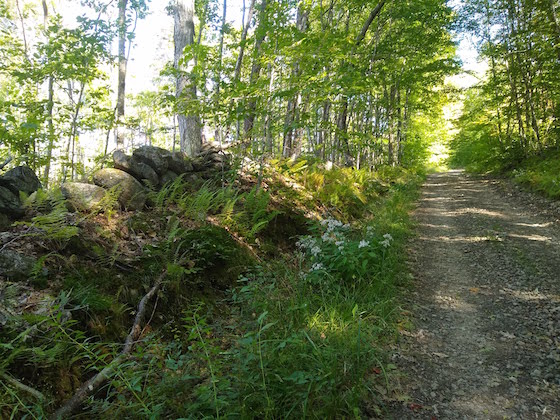 Here’s a typical stone wall along the road to Dearborn Pond created by rounded rocks tumbled by the continental glacier that covered all of New England 13,000 years ago. There are miles of these stone walls in the forests as the homesteaders cleared the land to make pastures for sheep. It was easier to stack rocks to control the wandering sheep than put in fenceposts and rails. The wool sheared from the beasts was used to make woolen items exported to Europe before the Civil War. Copyright 2019 Tim Carter W3ATB

Before long the gravel road started to head down to a stream crossing.

“There’s a trail here to the left that will take us up to the pond.” Jim remembered it clearly even though it had been ten years since he had last been here. Vegetation grows fast and thick in the short summer season in New Hampshire. I think Jim forgot that part. 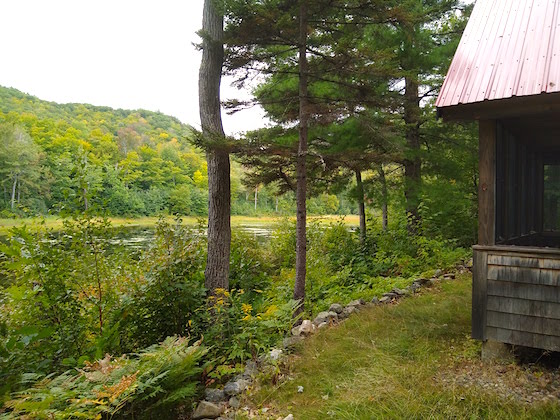 This is what I saw when we finished bushwhacking the last 100 yards to the pond. Not a soul was near us. The blue sky of the morning yielded to quite a few clouds in the afternoon. It’s truly a magical place, but as I said earlier, you probably don’t want to come here. The 70-foot tall tree with the thick trunk in the photo would hold up my antenna just five minutes after taking this photo. Copyright 2019 Tim Carter W3ATB

Neither of us could see any sign of a trail, but that wasn’t to stop us from bushwhacking our way. I knew the pond was above us as its overflow no doubt fed the trickling stream. It’s now the dry season in New Hampshire and some streams shrivel to tiny rivulet ribbons. This one was no exception.

“You set up your gear this time since I used all my stuff on Sunday.”  Jim was right, it was my turn.

Just off the corner of the cabin was a 70-foot-tall straight maple tree. Its crown was narrow, perhaps just 12 feet.

“Do you think you can get your water bottle up there?” Jim knows better but asks because I’m convinced he loves to get a rise out of me.

“Whatever. Just watch and see.” I murmured as I was coiling up my halyard string so it wouldn’t get snagged in the tall grass or a twig. Watch this video to see how it’s done:

Moments later I was swinging my water bottle just as David did before he slew Goliath. I released my water bottle at the precise instant so as to go nearly straight up and sail over the tallest branch of the tree. There was virtually no margin for error.

“Oh my gosh! That was the best throw I’ve ever seen you do!” Jim exclaimed.

It was a remarkable throw and it’s just about the only thing I can do better than Jim on a routine basis. He’s an expert radio operator as well as a marksman. He still can make perfect throws too, and I often wonder if he’s just toying with my ego when he makes a ho-hum throw of his own.

But just ten days ago he did have a major failure at Potter Place. One of his Nalgene water bottles decided it much preferred to dangle 50 feet up in the air for the near future near the historic railroad station rather than come back down to be stored in his dark backpack. The trees at Potter Place have an appetite for water bottles. But I digress! 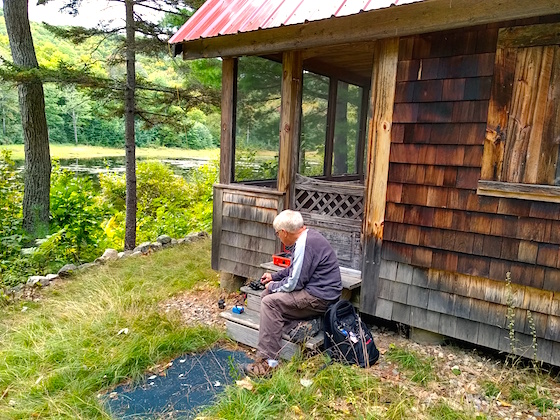 It doesn’t take but a few minutes to set up my Elecraft KX2 radio. As usual, I had a 29-foot wire attached to a 9:1 unun to help tame the impedance in the short wire. Fortunately, there were a few strong signals on 20 meters. Copyright 2019 Jim Cluett W1PID

“When I used to come up here years ago I’d sit on that porch and make contacts. Now it’s screened in.” Jim mused thinking of past excursions to this most wonderful location so close to his house.

“Well, I think this place would make a perfect location for Field Day next year. We should reach out to the owner to see if he’d let us sit on the porch.” I pondered.

“Do you think you could get your truck up here?” Jim wondered.

Jim decided he didn’t want to do radio so I sat on the steps and got on the air. 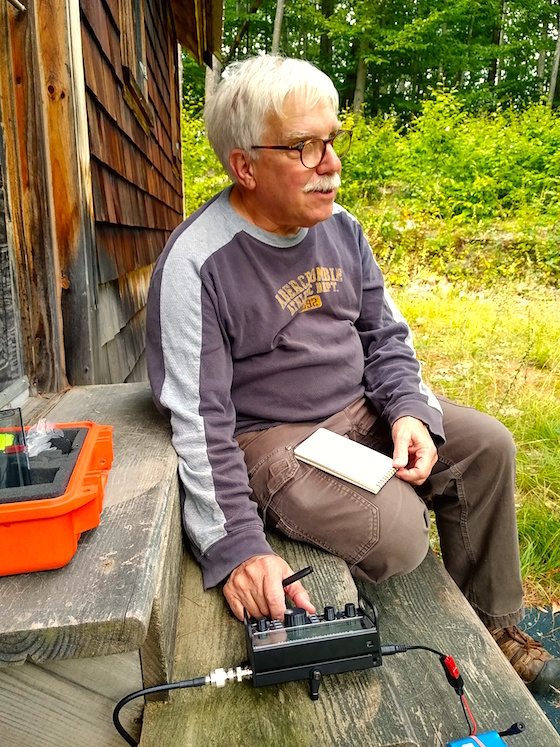 Jim is also damned good at taking great photos. It looks like I just woke up with my frazzled hair! There wasn’t any room for him to sit on the steps with me so he was banished to the rocks at the edge of the pond. My Elecraft KX2 is powered by a mighty Bioenno LFP 3 Ah battery. It allows me to be on the air for hours of fun. Copyright 2019 Jim Cluett W1PID

“I’ll just sit over here on the hard rocks near the ants and other bugs. Don’t worry about me.” Jim is quite talented at throwing a blanket of guilt over me. My mother would be so proud of him! RIP mom!

At first, I heard Hristo, LZ2HR calling CQ from Bulgaria. His signal was very strong. I sent my call sign, but other stronger stations drowned out my meager 9-watt invisible digital transmission.

Next up was Bernie, KB4JR, who was in Lake Wales, FL. We had a nice slow back-and-forth conversation. I told Bernie I was “on a hike near a pond in NH”. I don’t think he quite believed me, but he surely will after he reads this tale!

I wanted to get at least one more contact in my logbook before we left as it was starting to get close to 5 PM.

I went back and found Hristo and other stations were trying to contact him as well. I tried to sneak in between a few conversations but my weak signal wasn’t cutting it.

There was no way I was giving up. Just as he finished up a short contact with another operator and before he sent his CQ again, I cast my callsign into the ether right into his radio.

BOOM! Hristo heard me and gave me a respectable 559 signal report!

We decided to pack up and get back home as dinner time was fast approaching. Outdoor hikes and radio make for a delightful time. You might want to try it, but for goodness sakes don’t do it at Dearborn Pond!

After I got home, Jim sent me the following photo he took. Ansel Adams would be proud no doubt! 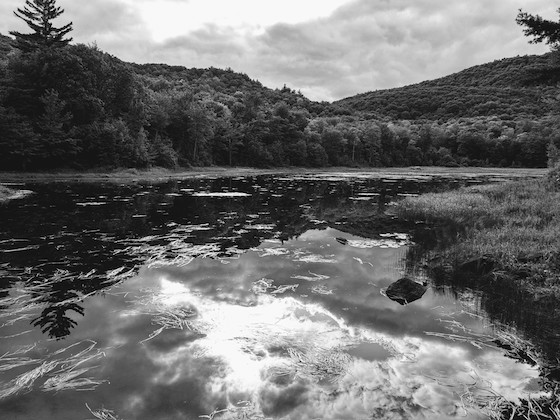