On September 14, 2019, I had the distinct honor to sit at the actual telegrapher’s desk in the historic and restored Ashland NH, railroad station as part of their 150th anniversary.

A member of the Ashland Historical Society, John Dufrat, applied for a special event callsign from the FCC. I used W1A all day instead of my personal callsign.

Real telegraphers sent their messages over miles and miles of wires that ran along the railroad tracks.

Those wires have long since vanished, so I re-enacted the part by sending Morse code using a traditional brass straight key and the invisible electromagnetic waves traveled through the air across the Atlantic Ocean and to other operators in the USA.

The general public that came for the festivities really enjoyed hearing the di’s and dah’s. Many asked me all sorts of questions, not the least of which was why telegraphers wore green visors. Do you know the answer? I do. Put your guess in the comments below to see if you’re right. Tell me why they also wore the sleeve socks you see me wearing.

Here’s a photo of the page from my logbook. 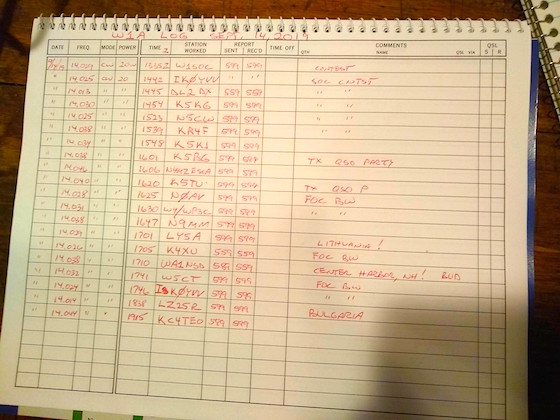 Here are all the stations I contacted from the Ashland Railroad station on September 14, 2019 using the W1A callsign.

10 thoughts on “Tim the Telegrapher”