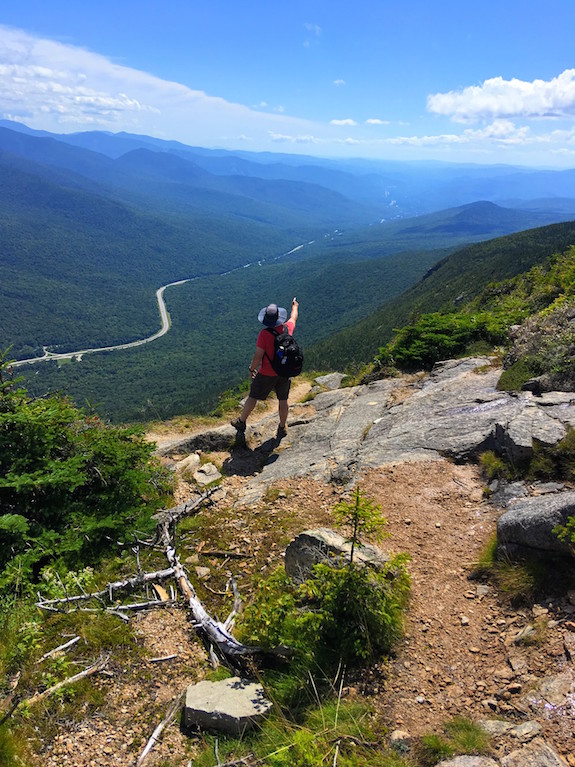 Here I am standing on the east face of Cannon Mountain soaking up the stunning view to the south. I was pointing to where I live just 43 miles away. You can actually see Mt. Lafayette, which is out of frame just to my left across the valley below, from the top of my street on a clear day. The roadway below is the infamous I-93 where it’s just a simple two-lane road up through the Franconia Notch just to my left. Copyright 2019 Jim Cluett

My good buddy and friend Jim Cluett, W1PID, and I made a return trip to Cannon Mountain yesterday. It was important for me to be there as I needed to minimize the distance between me and the ionosphere. When you do this, you’re above the fray and all of your signals have a better chance of being heard.

We once again set up on the Kinsman Ridge Trail just a three-minute walk from the tram building at the top of the summit. Riding the tram is free for old goats like us. It’s a benefit only available to New Hampshire citizens of distinction who have offered their protection to the state for a minimum of 65 years past their natal days. 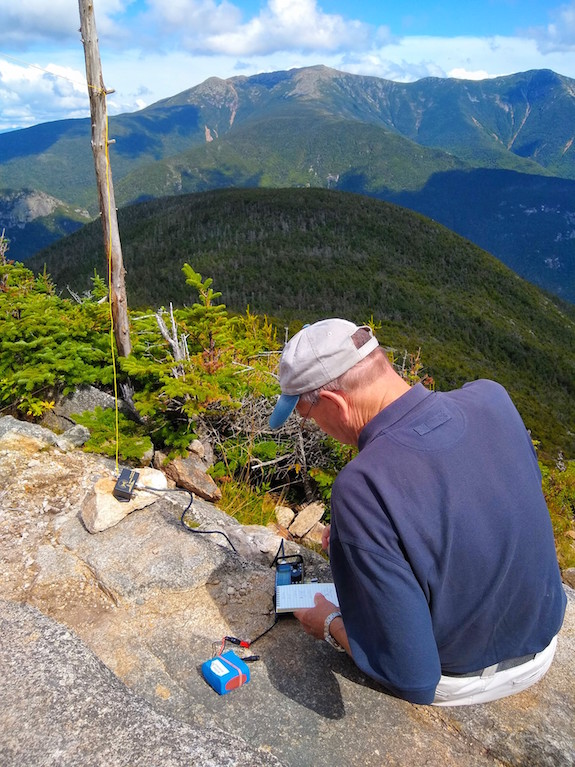 Here’s Jim logging one of the many stations we heard, but they didn’t hear us. The first 90 minutes were frustrating, but the scenery soothed the pain. The top of Mt. Lafayette is just above Jim’s hat – the bare rock peak. Mt. Lincoln is the peak in the upper right corner of the photo. Copyright 2019 Tim Carter W3ATB

After we ate lunch, we set up the antenna. We started with my 44-foot twisted-wire dipole that had a 25-foot feed line. My extendable fiberglass panfish pole held the center of the antenna about 12 feet in the air. We had to lower it from its normal height for fear of breaking off the thin last two sections of the pole.

We heard quite a few stations with the first one being Kuwait, 9K2MU. His signal was so strong we were sure he’d answer us. It was not to be. Jim said he had worked him at least a half a dozen times before. 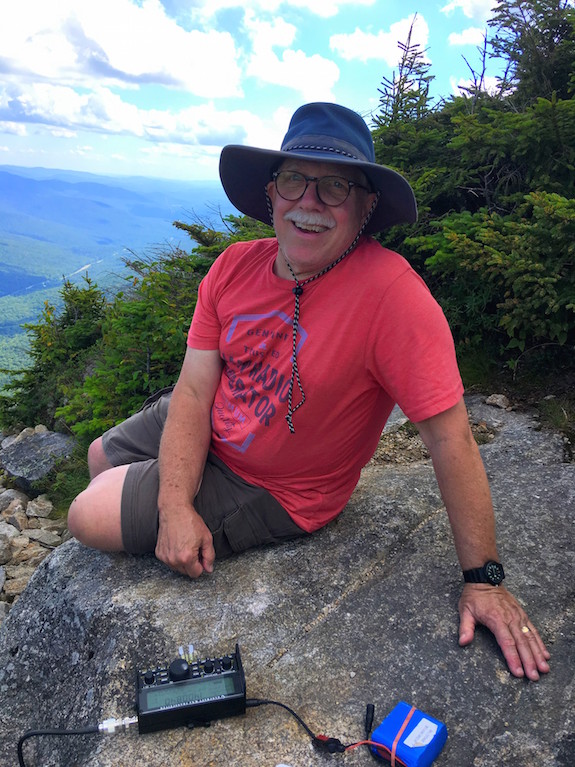 Here I am trying to snare a signal out of the air. This shot was taken after we kicked the 44-foot dipole antenna to the curb. That’s my Elecraft KX2 powered by a 3 Ah Bioenno LFP battery. Copyright 2019 Jim Cluett W1PID

Here’s a list of stations we heard but alas, they didn’t hear us. Note how all of them but one were over 3,000 miles away across the Atlantic Ocean:

We tried for no less than 45 minutes to get someone to hear us. Jim thought the issue could be the feedline of the 44-foot dipole antenna. We had too much coiled up and close to the ground because we were unable to get the center of the dipole 25 feet up in the air. That’s a bad practice for sure. When you use low power, 5 or 10 watts as we do, to fling radio waves into the ether, you can’t afford to have any signal loss into the ground.

We decided to take down the dipole and put up my reliable 29-foot wire that we connect to a 9:1 unun. I store my antenna attached to the string I use as a halyard to hoist the wire up into tall trees. The string is coiled up on a dandy Trident finger reel used by scuba divers. I own two of them and have them with me all the time when we go out on these little-man self-discovery trips.

“Are you sure there’s an antenna wire on this spool?” Jim quizzed me as he was unfurling over 100 feet of green string onto the ground.

Not looking over at him I replied, “Yes, the antenna is on the spool. For goodness sakes can’t you see it?”

“I don’t see it.” Jim has a long history of yanking my chain to generate a rise out of me.

“Whatever!” I replied thinking how could he be such a dolt.

As Jim was working on switching out the antenna wires, I had spied a 10-foot tall dead tree log laying in the short evergreens near us. Once jammed into a crevice in the granite, it would create a fantastic secondary antenna support. It’s important to realize you want your antenna wire as high off the ground as possible. 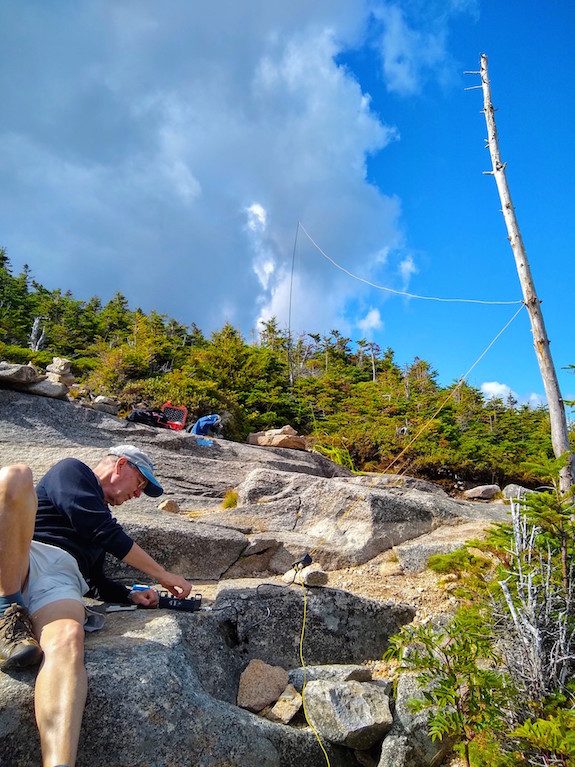 Here’s the 29-foot wire antenna with an assist from the dead tree. You have to contort yourself to get comfortable after sitting on the hard-ass granite for an hour or more. Jim has a leg up on me as he has much better radio skills. Note the 17-foot yellow counterpoise wire deployed along the granite. It’s connected to a post on the 9:1 unun. Copyright 2019 Tim Carter W3ATB

Moments later I noticed he had grabbed the WRONG halyard reel out of my Pelican 1200 case that I store most of my gear. The CORRECT Trident finger reel that had the antenna wire at the end of the string was still in my backpack!

“You’ve got the wrong reel, you idiot! Didn’t you bother to look through the handy holes on the side of the reel to see all you had was string?” I chastised Jim.

“Maybe you need to put an antenna wire on the reel that’s a different color than the string!” Jim quipped.

“Whatever!” You can count on a snarky response from me from time to time. We both burst into belly laughs that I’m quite certain could be heard across the notch to anyone on top of Mt. Lafayette. 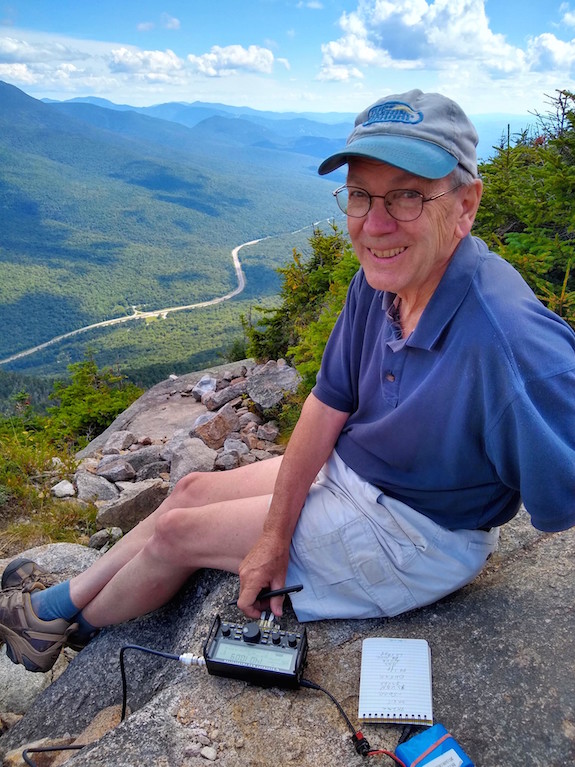 Jim’s no dummy. He’s a great operator and given enough time he can serve up a dish of revenge cold as the Wisconsin continental glacier that carved the valley you’re peering at 20,000 years ago. Copyright 2019 Tim Carter W3ATB

Mother Nature has been doing a great job over the past 13,000 years of turning the giant piece of bedrock that comprises Cannon Mountain into small pea-sized pieces of granite. The giant continental glacier that covered all of New England and most of the Midwestern USA all those years ago had retreated to just north of where we were sitting. Once the ice melted off the top of Cannon Mountain with no trucks, buses, factories around belching CO2, the hard granite was exposed to the elements.

The small pieces of granite are like ball bearings on the exposed ledge. You need to be damn careful not to slip and fall. Twice yesterday Jim almost tumbled because of a combination of the stones and wet rock from overnight heavy rainfall.

We switched off taking turns at the radio trying to avoid the skunk.

“Are you sure this thing is transmitting?” Jim asked.

“Yes, see the blinking red LED when you key up?”

“Well, that doesn’t mean much. You could have blown the finals.” Jim offered up his sage wisdom.

“Whatever!” That’s my standard reply when he mansplains things to me.

Finally, Jim got a station to answer him! LZ50ZF. It was a fine DX contact from Bulgaria. The operator heard us perfectly giving us the best signal report you can get: 599

That proved my little Elecraft KX2 was doing just fine.

Jim surrendered the radio to me so I could also avoid the skunk. I think he decided to do some trail maintenance so others might not fall. 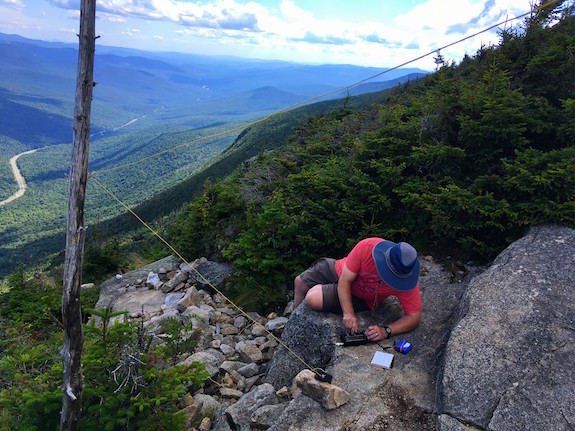 Here I am hard at work trying to avoid the skunk. The 29-foot wire was doing a superb job. Note how my hat resembles a round shooting target. Copyright 2019 Jim Cluett W1PID

I was bound and determined NOT to leave until I had at least one contact.

Soon I was tightly focused on spinning the VFO knob on the radio and all of a sudden I felt something hit my head.

It was a damn stone thrown by Jim! I chuckled and went back to work trying to get a contact. Then another stone hit my hat. And another.

“I’m starting to run out of small stones up here!” Jim announced.

Once again giant howls of our laughter filled the valley. We do have so much fun going out, it should be illegal. Surely we’re stealing the happiness from some others, but who knows?

Moments later, I made contact with HA8QZ in Hungary. Oh, that was a great feeling!

Then both Jim and I made contact with Paul, a second Hungarian – HA8JV. We’d been at it for over two hours and it was after 3 PM. It was time to head back down the mountain. 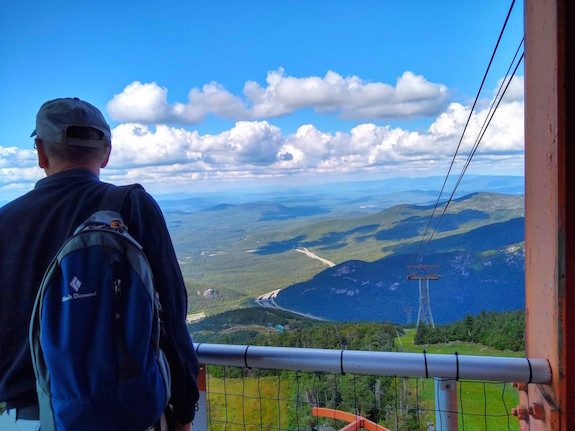 Here’s Jim soaking up the scenery from the Cannon Mountain tram platform just before the tram arrived to take us back down. It was a splendid day. Copyright 2019 Tim Carter W3ATB 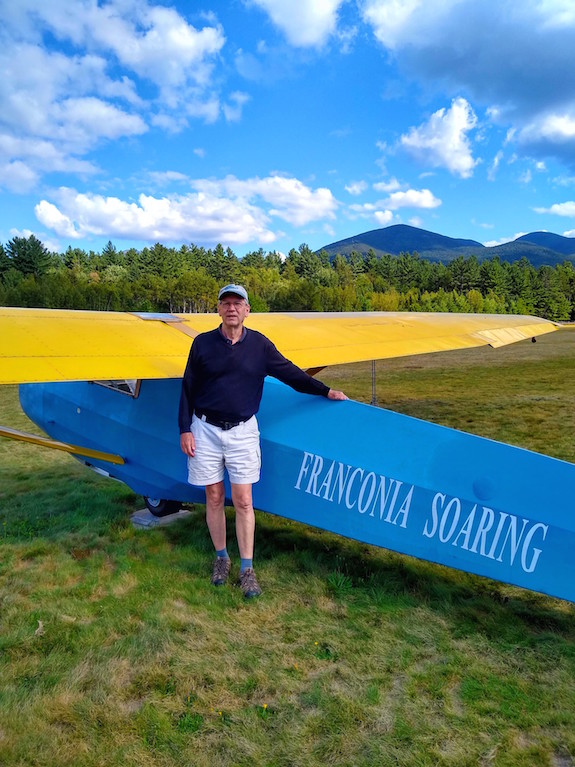 Here’s Jim strolling down memory lane. He’s standing next to the glider his daughter flew when she was just 14 years old. We were at the glider port at Franconia, NH. We decided to go there as we had time and it’s so close. It was just ten minutes up the road from Cannon Mountain. No one was there as the glider activity happens only on the weekends for the most part. Jim showed me all the planes his daughter flew. She was flying gliders solo before she could drive. What a fantastic feat. I’d love for her to take me up in one of those gliders. Who knows, maybe it will happen one day when she visits NH. Copyright 2019 Tim Carter W3ATB

After leaving the glider port, we headed home. It was a fun and exhausting afternoon. I think laughing makes you tired and I know for a fact Jim’s going to have a sore right arm from flinging all those stones at me.