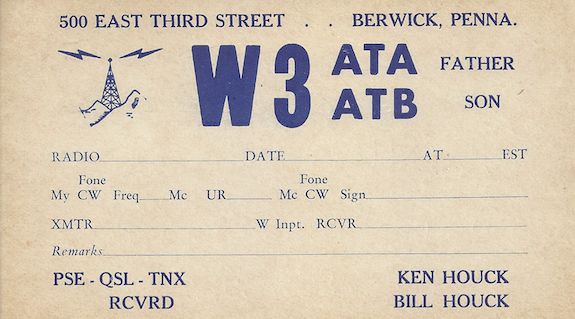 This is one of Bill Houck’s original QSL cards. He shared it with his father. Read the story below to get a full report.

The amateur radio community is very unique. You may never meet many of the people you contact over the airwaves, but often you might feel as if that person is a brother or sister.

You think nothing of contacting a fellow operator to say hello or send a prize. Just two weeks ago I was stunned to receive a surprise parcel from Japan filled with Japanese chocolate bars from Hiroshi Mizuhara, JO4ABC.

Just before that, Bill Houck reached out to me the first week of February 2021. He looked me up on QRZ.com and found my email address. Here’s what he sent to me via email.

Just wanted to let you know that I am a previous owner of W3ATB. My father got me interested in amateur radio when I was in 8th grade and in turn, became interested himself.

We took our exams together and he was issued the call sign W3ATA and I was issued W3ATB which we held for years until I moved to North Carolina. My father also opened up the use of our basement as a ham workshop for my school friends so many of my friends became hams and we developed great friendships around ham radio.

In my adult life, my father and I talked on 40 meters every Sunday afternoon for years until his health made that impossible. I still have some of our combination (W3ATA/W3ATB) QSL cards if you are interested. Please email your USPS mailing address.

P.S. Here is another interesting story about a contact that I had back on Jan. 19, 1957. I had made contact with a K0ATB and he looked up my mailing address and saw that W3ATA was at the same address which prompted him to ask how we were related.  He was curious because it turned out that K0ATA was his father.   WOW!  What are the odds that two father-son hams could get the consecutive ATA and ATB call signs?

P.P.S This is a continuation of the mention of my school friends that got their ham radio licenses when I got mine. We studied Morse code and radio theory together in my dad’s basement and got our general class licenses about the same time.  We were active on the air and sometimes even talked to each other. 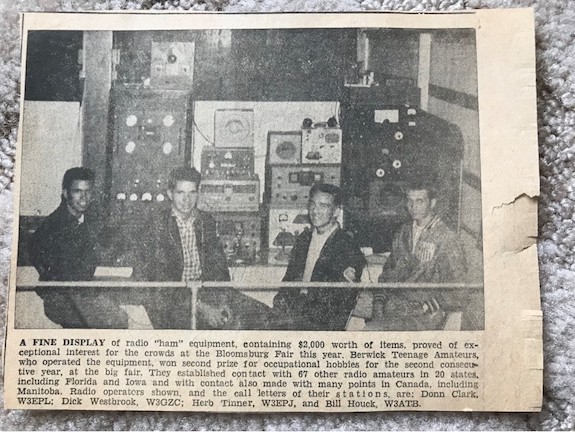 Since we were all in the same grade and in the same high school sometimes our on-the-air discussions were about homework and we were even known to play chess over the air.

Since we were novice chess players, we didn’t know the chessboard notation and were surprised when some other helpful hams informed us about how the squares all had names – that was very helpful.  Since we were known for our ham activities and we did a lot of stuff together we were known by some of our teachers as the four musketeers.

We also participated in local public events where we would set up our equipment and demonstrate operating the equipment. At that time ham radio was gaining in public interest.

I have attached a photo of a picture from our local newspaper taken when we took our equipment to the local Bloomsburg fair.  My friends names are Donn Clark – W3EPL, Dick Westbrook – W3GZC, and Herb Tinner – W3EPJ.  None of us is an active ham today but thanks to our ham radio friendships from our high school days and the internet we stay in touch now via emails.

What a treasure and prize to get Bill’s ham history and one of Bill’s original QSL cards!

Is Bill the Original W3ATB?

It’s quite possible Bill is the original W3ATB. The FCC issues call signs in a very normal sequential order. The W3 is automatic since Bill and his Dad lived in Pennsylvania at the time. Pennsylvania, Maryland, and Delaware are the three states in the 3 section. 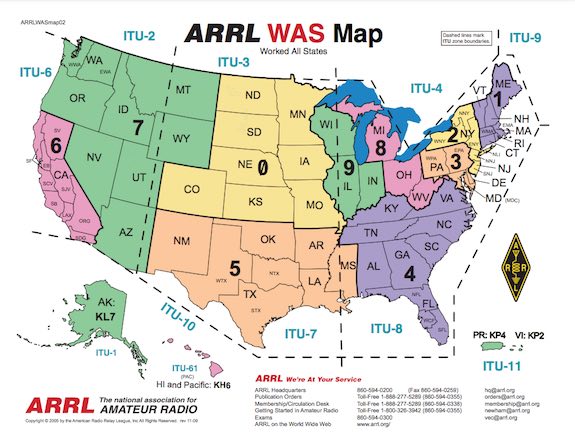 The FCC had already assigned  W3ASZ to someone, so the next up was W3ATA. That went to Bill’s Dad and the next call sign to go out would be W3ATB.

Bill was assigned the W3ATB call sign on December 20, 1954. He had a novice license at the time that was only good for a year. If he didn’t upgrade, he lost his privileges. After the great WW II, hams were allowed back on the air and the hobby experienced explosive growth.

When you do the math knowing that the FCC started with W3AAA as the first ordinary call sign to give out, you can see that there were hundreds of call signs issued before they got to W3ATB. I’m convinced Bill was the original W3ATB.

The other clue is his Dad’s call sign. The FCC issues call signs in sequential order and fortunately, Bill’s test results and his Dad’s were stacked on top of one another with Bill’s dad being on top of Bill’s. The FCC employee was just running through the pile of test results on her/his desk.

The exact same thing happened in my club about nine years ago when a group of students took the test the same day and our VEs sent in the results. When the new hams got their call signs they were all only off by one letter as Bill’s and his dad’s.

He subsequently changed his callsign to W4ZNG and here is the last QSL card Bill used. He is no longer active in amateur radio.

My current W3ATB QSL card is below his. Lady the dog, who is featured on my card, no longer escorts me on outings. She’s chasing cats, squirrels, and deer up in Heaven never getting close BTW.

Some things never change. Isn’t that right, Lady the dog? 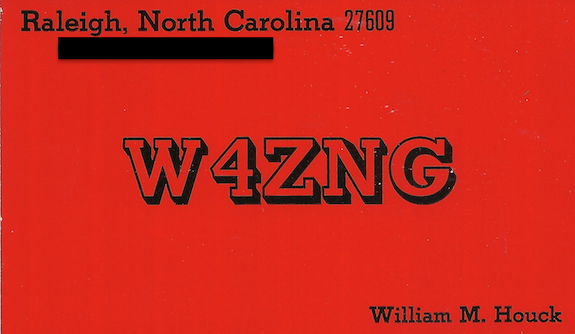 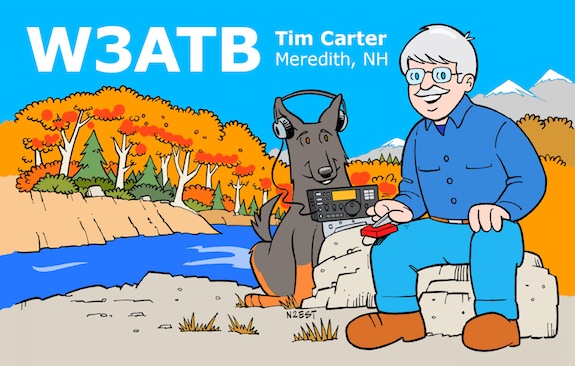