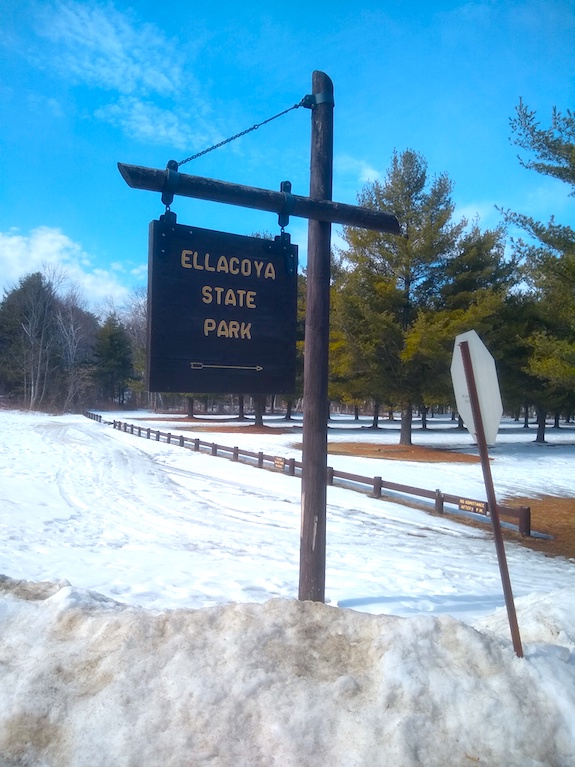 I did a Parks on the Air (POTA) and a World Wide Flora & Fauna (WFF) radio activation from this park today. I expected a pileup and wasn’t disappointed.

Today was a remarkable weather day here in central New Hampshire. It got up to 61 F but to us locals, it felt like a sweltering 90 F summer day. When you’ve been tolerating below-freezing weather for months, anytime you get sunshine and temperatures in the 60s with snow still on the ground, it’s hot for New Hampshire.

I was drooling to get outdoors to do low-powered radio. My last outdoor radio adventure was just six weeks ago for Winter Field Day and it was a balmy 10 F that day.

I’ve known for days that spring is just around the corner because the chipmunks have been skittering around my house and yesterday I stood outside and soaked myself in the sounds of a morning dove cooing. It was almost surreal to be standing in the sun without a heavy jacket on. Spring traditionally comes late to New England.

Back From the Dead

I decided to treat myself to an outdoor radio adventure doing an activation of one of New Hampshire’s state parks. I selected Ellacoya State Park because it’s only a 30-minute drive from my house and there was a possibility I could be operating from the shore of Lake Winnipesaukee soaking up the sun.

Ellacoya State Park is on the south shore of Lake Winnipesaukee, better known as the Big Lake. It’s got 72 square miles of surface area. The only issue is that the entrance to Ellacoya is just off a major roadway, Route 11. The torrid WX yesterday brought out the motorcycle enthusiasts just and it drew me outdoors. I had a very hard time hearing the radio signals over the roaring throaty Harleys that would zoom past every 90 seconds or so. 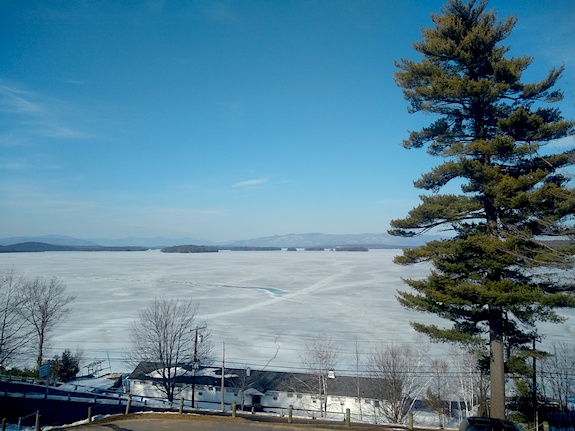 Lake Winnipesaukee – It’s still covered with ice, but it’s getting thinner. I predict ice out on April 13, 2021. This is the view I would have had while doing radio had I wanted to trudge through the snow. I opted not to do this. Easy access to the beach parking lot was blocked. It was a stunning bluebird day as you can see. 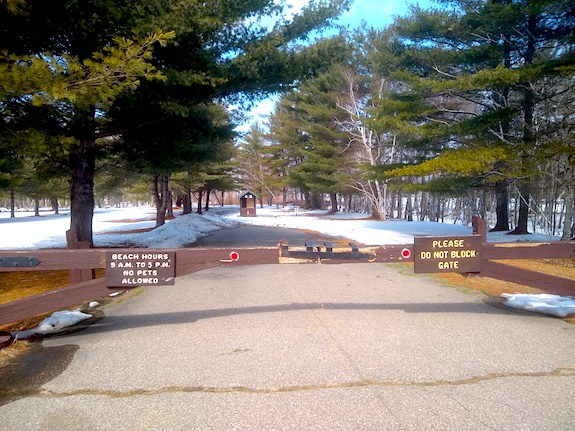 I wasn’t about to walk all the way to the beach from here. See where the snow ends? You need to walk through the woods another 100 yards or more post-holing all the way so when you get there your pants and boots are soaked. My mentor Jim Cluett might do it, but not me. Not today.

Back five years ago I experienced my first park activation with two of my mentors, Jim Cluett and Dave Benson. We activated St. Gaudens National Historic Site in New Hampshire as part of the enormously successful National Parks on the Air all-year event in 2016.

After that day, I was hooked. I went on to activate 30+ more parks all across the USA in 2016. Many of those stories are here on the blog. Just type NPOTA into my search engine to locate them.

The following year, 2017, I extended the run getting involved in the fledgling POTA and WFF programs. I quickly discovered these two groups didn’t yet have the critical mass to keep my interest so I stopped activating parks near my home.

Until today, that is. I had seen months ago on social media that both groups had grown significantly, especially POTA, and I was certain today would bring back the excitement I used to feel as my radio speaker would explode with incoming signals from other operators who wanted credit for contacting me. 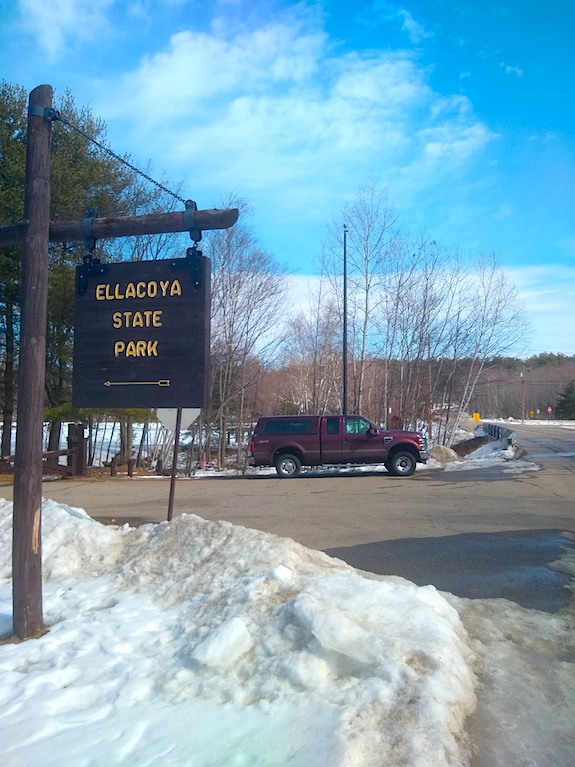 This is where I decided to set up because the gate to the beach was locked. The tall tree next to the flagpole is what supported my antenna.

I decided to be on the air at 1 PM local time and just play radio for 90 minutes. I figured that would satisfy my appetite. My normal setup is either my Elecraft KX2 or Elecraft KX3, using a 4.5 Ah BioennoPower lithium-iron-phosphate battery. Today I opted to use my Elecraft KX2. 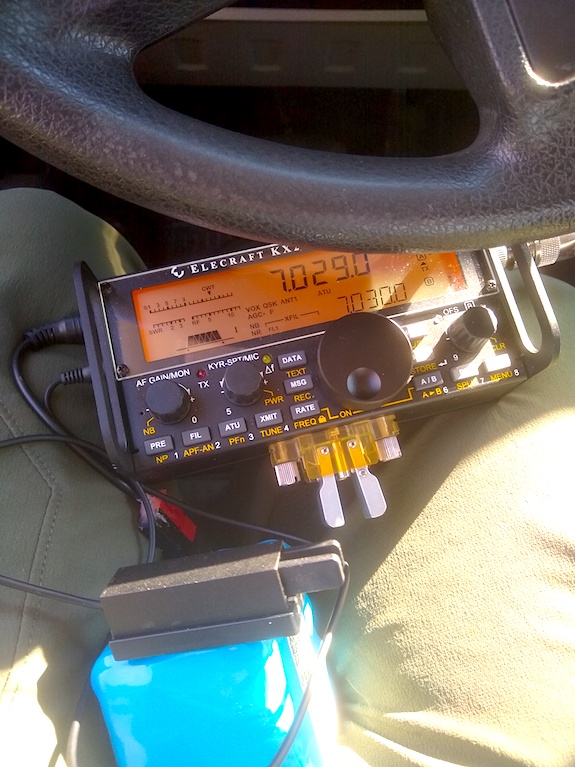 I was sitting in my truck doing the activation. The front was pointed south and the sun was pouring in. At first, the radio was in the sun and it overheated causing the electronic keyer to send Morse code fast then slow then fast. Once I figured out it was a heat issue, I moved it into the shade on my lap. Everything calmed down within minutes. I started out using the paddles on the radio and when the keyer started having a hissy fit, I switched to my micro Pico Paddles that are on the BioennoPower battery.

My antenna is a simple 29-foot wire that dangles from a tree branch. I attach a 9:1 unun to the end of the wire to help tame the resistance and keep the radio happy. 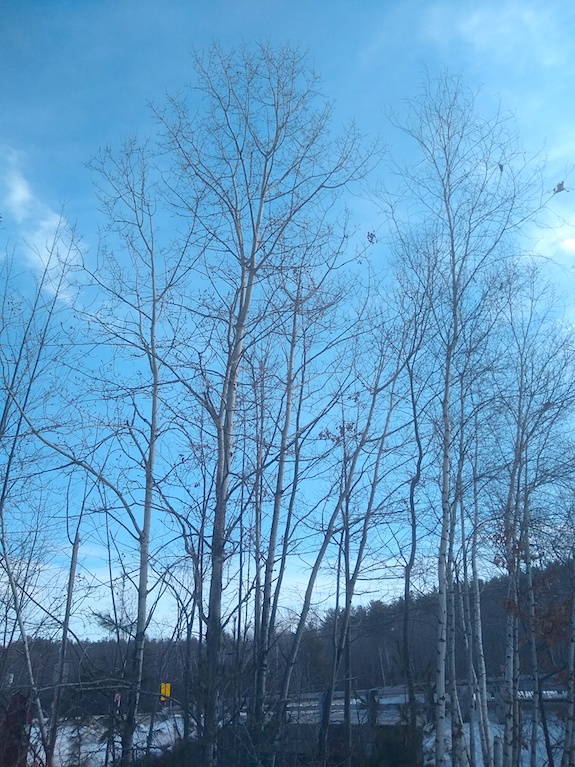 That tall tree was going to support my antenna. 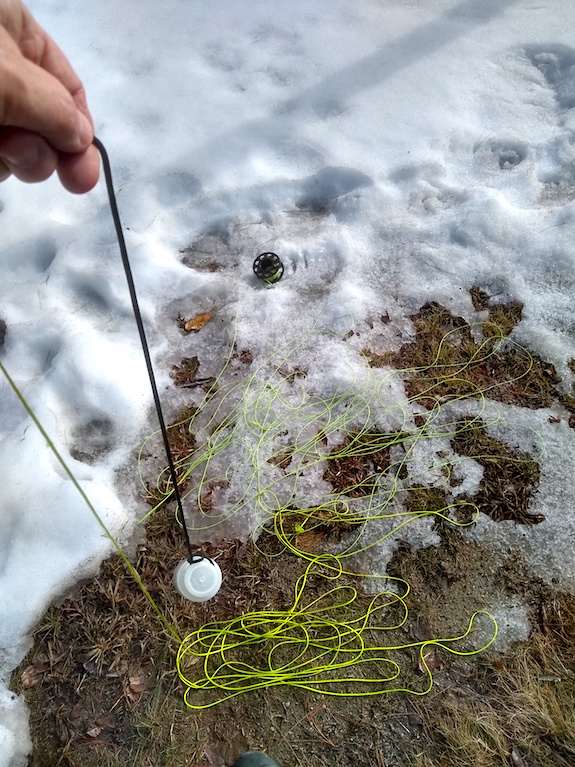 My lanyard string is all laid out and I’m ready to hurl my water bottle up and over the top of the tree. My first throw was perfect. See my Trident Finger Real at the top of the photo in the snow? My antenna wire is still on it tied to the string. It will all make sense in a moment when you watch the video below to see how I do it.

Once I was on the air, the magic happened. I had posted on the POTA website that I was going to be at Ellacoya State Park, so lots of operators were at home waiting for me to get on the air. The operators at home are called hunters and they lust for new parks they’ve never put in their logbooks. The New Hampshire parks haven’t been activated that many times so you can expect lots of activity.

Back in 2017 after NPOTA was over and I was doing lots of POTA parks, I became virtual friends with Jess Guaderrama, W6LEN. Jess has been doing radio for 65 years and he was instrumental in me activating many parks in Oregon and California that summer. You can find all of those stories here just typing POTA into the search engine here on this website.

As soon as I got on the air at 1:00 PM, other operators were clawing at each other to make contact with me. We call it a pileup quite similar to what happens on a football field with players trying to get at a fumbled ball.

I wish I would have had a video camera on me when I heard, W6LEN come through the KX2’s speaker. “There’s Jess! WOO HOO!” It was such a thrill to work him and I said a quick “Hello” as I knew the other operators waiting for me wouldn’t much like Jess and me to chew the fat.

Both POTA and WFF have really caught the attention of radio operators all over the world. I was stunned to make contact today with operators in Germany, France, and Finland. I hope it’s as thrilling for them as it is for me. 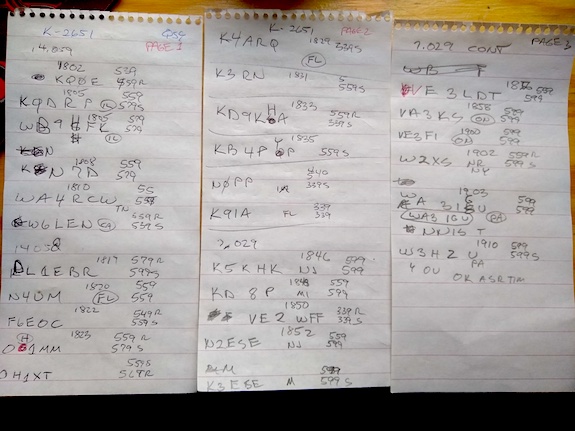 This is my logbook from the activation. I’ll transcribe it to make it look neater and submit all this data so all operators get credit for making contact with me.

The ninety minutes vaporized. It felt like I was on the air for only ten minutes. That’s what happens when you do these activations and you have lots of operators trying to contact you. I find it hard to verbalize how much fun it is. It used to be stressful, but now I just answer each operator as I can.

I’ve decided to get back into the POTA and WFF activation game and as Jess said to me, “He’s back from the dead.” You’ll see more stories about my activation adventures as the year progresses.

Author’s Note: A week after the activation I got a wonderful QSL card from Andy Lach, KD9KHA. It turns out Andy is quite the artist. Look for yourself.

His card made my day as I wondered, “How many people in the USA received something in the mail today that was hand-drawn just for them? Ten, a hundred, even two hundred?”

I can assure you, it wasn’t many. 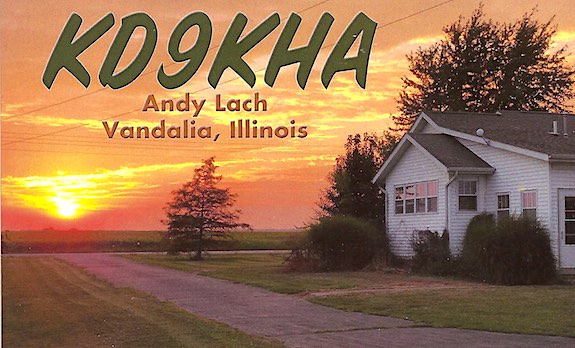 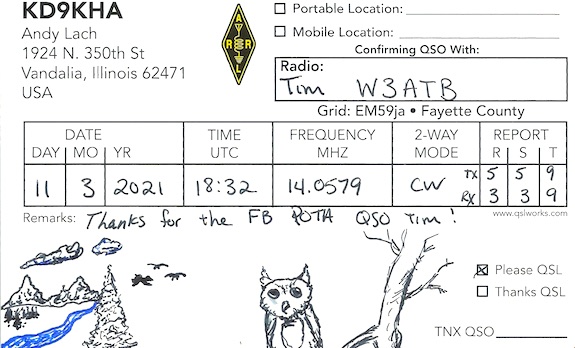