Jim Cluett, W1PID, and I went to the jaw-dropping Livermore Falls today.

It was a bright cloud-free day and even though we’re just days away from November, there was still lots of color on the trees. Fall came late this year because of a very warm September. Here’s what I was looking at just after leaving my driveway. It was going to be a splendid day!

We met to go to the falls after I left my truck to get serviced at a local Ford dealership. Jim and I had at least two hours to play radio and get some lunch. We ended up stretching it to three hours as it was such a gorgeous day.

As we walked down the dirt path to the falls, we could hear the roar of the water. 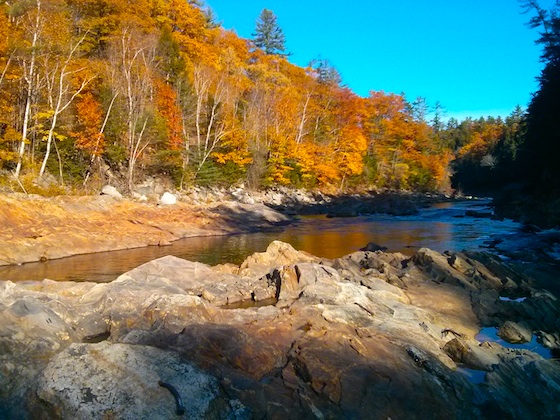 This is the Pemigewasset River just before it dives down the falls. You can see the first step in the falls in the lower right corner.

The Pemigewasset River cuts across some very hard metamorphic rock that’s been polished and rounded by countless gallons of water over thousands of years.

I couldn’t resist shooting this video of the rushing water.

Although Jim and I have been here at least two other times, this was the first time I had wandered down to the water’s edge. There’s a giant sand bar on the west side of the river and someone had stacked a few stone cairns. 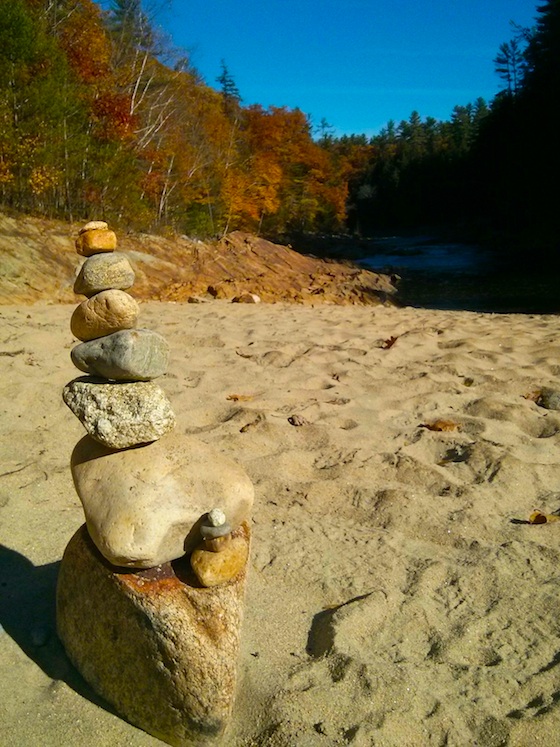 This cairn was about 18 inches tall. I wonder how long it will stand?

It was peaceful down by the river.

As I was admiring the falls and soaking up being next to the roaring water, Jim was busy setting up next to some railroad tracks above the river. Jim’s a pro. He found a perfect spot in the sun with a nice flat rock to use as an outdoor ham shack.

He’s my outdoor QRP radio sensei and he’s a pro at working as many bands as possible in a short amount of time.

Today would turn out to be one of his best days ever with respect to other operators able to hear his signal. Propagation was superb and he was racking up the QSOs.

Here he is working his first contact. Years ago Jim was a TV news producer and helped create lots of news video, but as you’ll soon see, he doesn’t like to be on the other side of the lens.
I After shooting the above video, I wandered north up the railroad track about 150 feet and set up. Here I am just before I make my sole QSO with G4MLW. Photo credit: Jim Cluett – W1PID

Twenty meters was quite active, but for some reason many of the stations I could hear well, they couldn’t hear me. Jim thought it was my piece-of-crap 3-foot BNC cable that connects my radio to my par-EndFedz antenna.

He could be right.

I was trying to hunt and pounce and all of a sudden I heard a station BOOMING into me. It was Ian from England – G4MLW.

He was going much faster than I could copy, but I got part of his call sign the first time.

He came right back to me giving me a 559 signal report and I clearly copied his name.

I responded with a 599 as his signal was so strong it was as I was sitting next to him in his shack.

I asked him to repeat his call sign and he did.

By that time Jim had wandered up the track and took one of my ear buds. He was able to hear, with ease, Ian’s call sign.

I barely avoided the skunk, but the glorious WX made up for my dismal performance.

Winter is just around the corner and you can probably count on one hand the number of great days like today that we might get out to do more outdoor radio.