This is a 180-degree panorama shot of the view from the top of Carter Mountain Road in New Hampton, NH. Unfortunately, because this photo has been reduced in size you can’t really see the majesty of what my own eyes saw. CLICK HERE to see all the high-resolution photos of this adventure to Carter Mountain Road.  Copyright 2018 Tim Carter

Tuesday, April 24, 2018 was the second day of glorious spring here in central New Hampshire. Winters are typically long in Northern New England and just one week before we were dealing with a wretched sleet, ice and freezing-rain storm that spanned two days. We thought spring was never going to show up.

Carter Mountain Road – Not My Mountain

The sun was out, it was just about 70 F, ticks were scurrying about, birds were singing and the famous Robinson Falls in Blake Brook could be heard as the remaining patches of snow were being delivered to the pristine Pemigewasset River just three-quarters of a mile away. In other words, it was a day that helps restore the soul. 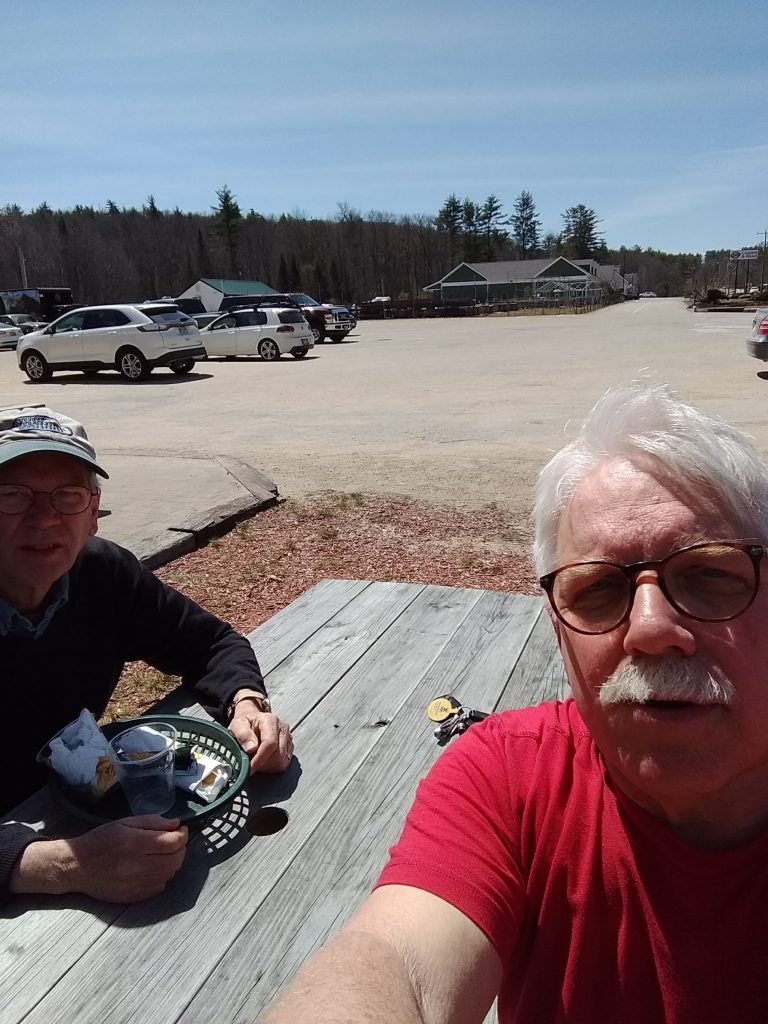 Jim, W1PID, and I had lunch before we went on the radio adventure. It was our first time eating outdoors since early last fall! Copyright 2018 Tim Carter

W1PID and I decided to set up and operate at a new location at the end of Carter Mountain Road in New Hampton, New Hampshire. Unbeknownst to me, as I had only been up this road twice before – and never to the end, it had a stunning view to the west and south.

My guess is the road was named after one of the two bumps you pass on your right as you drive up the road. Some long-ago settler named Carter must have lived in the hollow and one of the high points was named in his honor. If we’re related, I’m not aware of the connection. 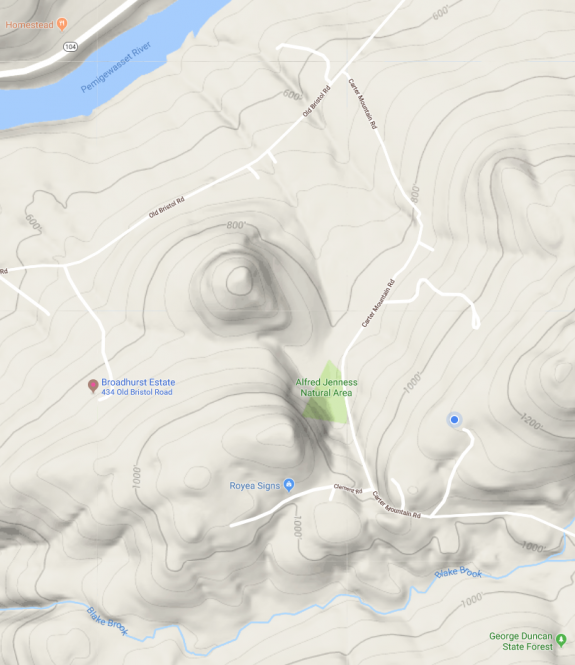 The blue dot marks the spot where Jim and I were set up. CLICK HERE to see all the high-resolution photos of this adventure. Copyright 2018, Google, Inc.

Within the past two years, the property owner had clear-cut about forty acres of land sending the trees to the local lumber mills and the power plants that make electricity burning wood chips. Much to our surprise, four trees were left standing in the wasteland. Two were aligned about ten degrees east of true north and were about 85 feet apart.

This was perfect for the 44-foot dipole antenna we had 30 feet up in the air within minutes of arrival. We had decided to just share Jim’s Elecraft KX3. Jim was enjoying the warmth and the view so much that he at first attached his short coax cable to the radio instead of the required small banana BNC connector for the dipole antenna twisted-pair wire leads. 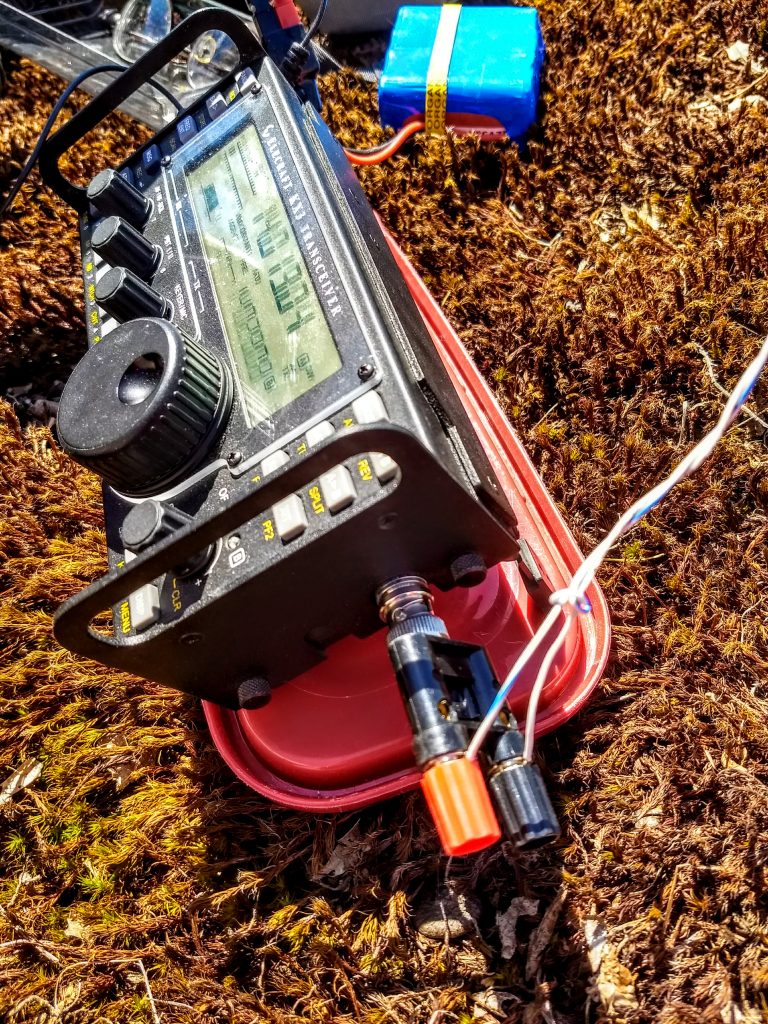 I’ve got my own Elecraft KX3, but we decided to use Jim’s. It’s the gold standard of portable outdoor radios. Copyright 2018 Tim Carter

After connecting the Bioenno Power 4.5 Ah LFP battery, Jim was turning the large VFO knob hunting for a strong signal on 20 meters. At first, there was nothing. Within a minute or so Jim heard Joe, DL4KCA calling from a suburb of Cologne, Germany.

I’m right at the cusp of being able to head copy Morse, but Jim’s been there for decades. Jim worked him first and got a 549 signal report. I then used Jim’s miniature Pico Paddles and got a 559 from Joe. Leading a pure and simple life has its benefits I’ve come to discover.

Next up was Bert in France. Bert, F6HKA, and Jim are old-time friends. Bert seems to be on the air from France every day as Jim has talked with him countless times. I’ve had the pleasure of working Bert at least two or three other times from out in the field. 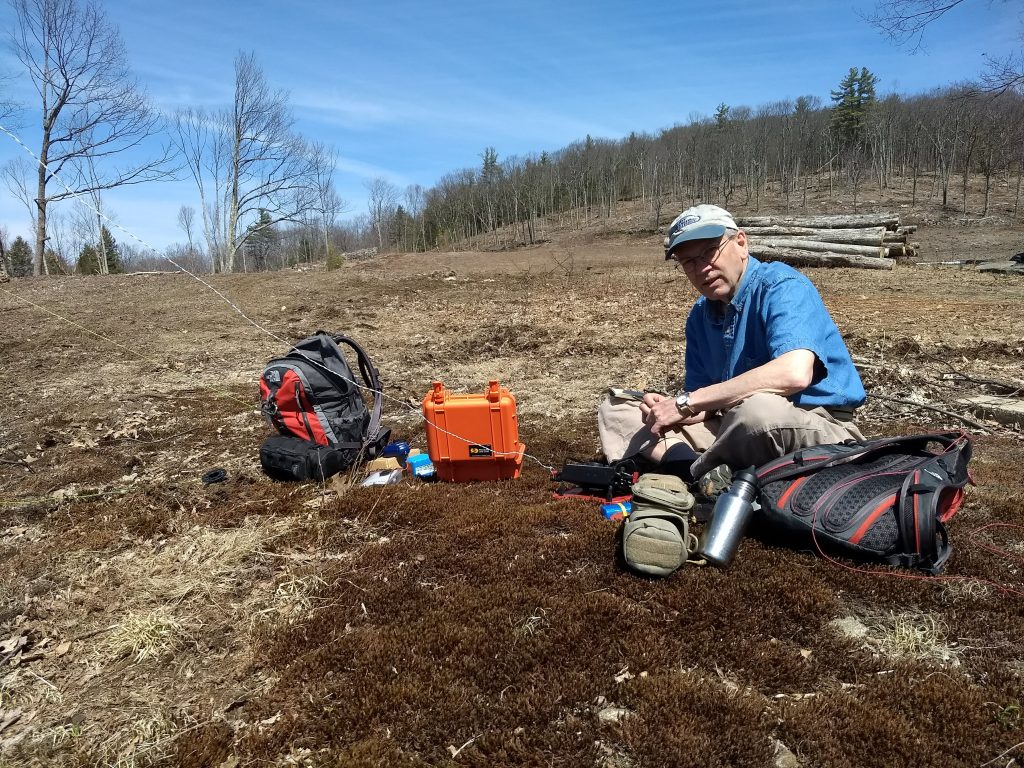 Here’s Jim happy as a clam. The ticks had not yet found him. He was enjoying the day too much to be bothered taking a photo of me operating. Perhaps next time… Copyright 2018 Tim Carter

Jim was being his usual polite self and signed off to Bert, “Merci” and then handed the paddles to me.

I wandered off to get my water bottle from my truck and Jim worked another station or two. When I got back to the soft moss we had set up on, I had one last QSO with Bud, W8HOG in Ohio on 40 meters. He was very strong to me and I gave him a 589 but his report about my signal was only 339. I blame Jim for this because his end of the antenna was pointing towards Bud.

We packed up our gear and decided to get on with our day. I had to scurry home to help make a birthday cake and dinner for my wife Kathy. I have no clue how Jim spent the rest of the day, but no doubt he was drumming his fingers waiting for me to publish this story.

I’m lucky to have him as a friend and we do have a grand time outdoors. Usually there’s lots of laughter and anyone who sees or hears us is jealous of the happiness that we generate.