Jim Cluett, W1PID, was asking his long-time friend Dick Christopher, N1LT, that question as we were gathered outside all our cars in the NH Park-n-Ride lot at exit 23 on I-93. It was just before 10 a.m. on a sunny late-August day, August 28, 2014 to be exact.

“I didn’t bring one. I figured I could use one of yours.”

Jim immediately responded, “You’re not using mine, you swine.”

Laughter ensued, and I quickly added, “You can borrow my HB-1B. I don’t mind.”

Soon we were all packed into Paprika, the name we’ve given Jim’s handsome newer Subaru Forester, headed north to Cannon Mountain at the top of Franconia Notch.

“How could you go on a dxpedition without a rig?” Dick’s cavalier approach to the day’s outing was still gnawing at Jim, although I did sense a hint of teasing when he asked the question.

Forty minutes later we were walking across the parking lot at the base of the Cannon Mountain Tram towards the mighty machine that would whisk us to the top in just eight minutes.

“Holy moly, it looks like you were the only one that dressed right!” Jim was referring to my long pants that had the zip-off legs in case it was warm at the top. Both Jim and Dick had shorts only and with the air temperature just 61 F in the parking lot and a stiff breeze above, there was no doubt I made the right choice.

I also had a long-sleeved polyester tee shirt and a warm fleece. I put both on before we walked to get our tram tickets.

It was the day after a cold front had pushed through and I was certain we’d be blessed with blue skies and nearly unlimited vistas from the summit.

Instead the whiteboard at the ticket window said:

Ouch! That’s not perfect outdoor radio weather, but we were told the clouds were lifting and things would get better.

The tram to the top of Cannon Mountain runs every 15 minutes. 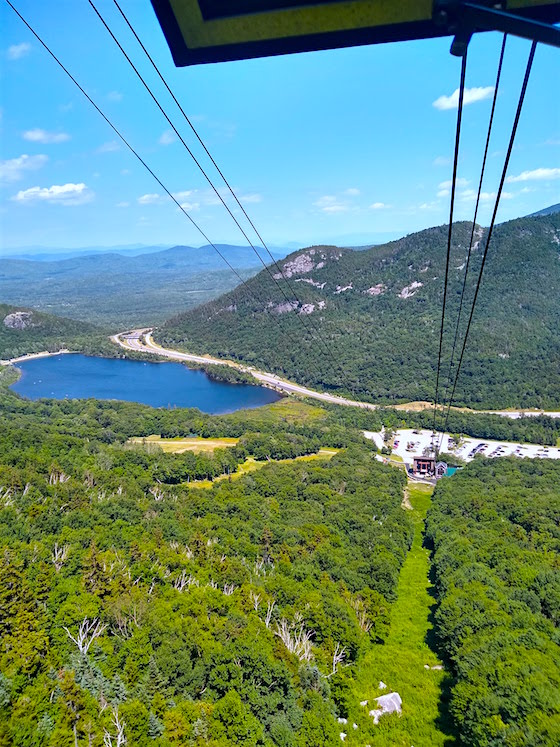 You’re looking at the infamous Franconia Notch as Jim and I ride up the tram to the top of Cannon Mountain. Out west they call these passes. I-93 passes right by Echo Lake and then starts to go downhill towards the Great North Woods in the upper left of the photo. Copyright 2019 Tim Carter W3ATB

As one goes up, another one comes down. The travel time is only about eight minutes giving the operators plenty of time to load and unload passengers at each end.

This is what we saw moments after arriving at the top of Cannon Mountain. The cloud ceiling was just above our heads, maybe by 60 feet. Photo credit: Tim Carter, W3ATB

Once at the top, we exited the tram/restaurant building and headed for a location to set up our small QRP (low power) radios.

“Wow, it’s windy! Let’s find someplace in the sun and protected by trees,” Jim suggested as we made our way across the walking paths. We setup just below where you see Dick with his yellow backpack on his back. Photo credit: Tim Carter- W3ATB

Minutes later we were in position and doing our best to get antennas up. The trees were not tall enough to allow us to erect vertical antennas, so both Jim and I had slopers. You can see Jim’s sagging sloper, but it allowed him to snag a guy in Ireland and a friend in NC. Photo credit: Tim Carter – W3ATB

The band conditions left much to be desired. I was tuning around 20 meters and all I heard were crickets. Often you can hear ten or twenty stations, some strong some faint.

“I have a wretched antenna. I should be ashamed of myself,” Jim uttered as the wind blew and clouds passed over us like an express train rumbling through a station.

Soon the weather improved and it was very nice to see blue sky and puffy white clouds. The WX got much better as you can see! Photo credit: Tim Carter – W3ATB

I got skunked as did Dick, but Jim was able to tweak out two QSOs, one with a station in Ireland and another a weak station on 10 meters from North Carolina. Here I am hunting for a QSO. I got skunked. That’s never fun. That’s Mt. Lafayette just behind me – one of the highest mountains in NH. Photo credit: Dick Christopher, N1LT

Soon it was time for lunch.

“Where are we eating lunch?” Jim polled both Dick and I and I suggested we could go back to the tram building and get a cup of hot coffee.

“I’m not eating in that stinkpot hole. We have this majestic scenery and we need to be out here. Follow me.” Jim had a plan and we were part of it.

Five minutes later we had arrived at a solid granite outcropping that faced Mt. Lafayette and allowed us to look down at the tiny sinuous blacktop ribbon of I-93 as it clawed it’s way from the valley up and over Franconia Notch.

Franconia Notch is perhaps most famous as the location of the Old Man of the Mountain – the logo and symbol of New Hampshire. This stone edifice crashed to the valley floor eleven years ago on an early spring morning. As we ate lunch, Jim got out his ICOM D-STAR HT. I brought mine too. We were full quieting into our Sanbornton, NH D-STAR repeater at 100 milliwatts! The repeater is about 60 miles south of the granite ledge we were resting upon and our elevation provided the needed line-of-sight pathway for this low power to work.

Think about what we did. We talked to a man driving home from work in Germany as we munched on our food all on one-tenth of a watt!

Once lunch was finished, it was time to head back down the mountain.

“Let’s go to The Flume!” I can’t remember if it was Dick or Jim’s idea, but ten minutes later we were at this magical geologic wonder that’s just below Franconia Notch.

The Conway Granite that forms The Flume was created 200 million years ago. It was molten rock that was deep beneath the surface of the ground.

As it cooled, it cracked and the cracks were filled with a black, dense volcanic basalt rock that was softer than the granite.

Once the rock was uplifted because of Continental Drift forces, the softer basalt eroded creating the narrow flume that we walked up.

At the top of the flume, I saw a young couple that reminded me of Kathy, my wife, and myself. We honeymooned at this exact spot almost 40 years to the day.

The young woman was taking a photo of her male friend as he posed inside a natural cave at the top of the trail. She kissed him just after taking the photo.

“Why don’t you give me the camera and let me take a photo of the both of you in the cave? I want you do give him a deep kiss.”

They giggled and obliged me.

“We need more photos.” They laughed and I shot more of them as they were awash in the happiness of the moment. Minutes later Dick and I joined Jim who was anxious to keep moving.

“Why did you stop and talk to them and take their photos?” Jim was shaking his head not having any history of what The Flume meant to me.

“I’m in the happiness business in case you’ve not noticed. I bring scads of happiness into people’s lives. They’ll have those photos and the memories of the old goat who took them for decades.”

“Let’s just go find a place to get more QSOs,” was Jim’s response.

It didn’t take long. We dove off the main trail up an overgrown service pathway and found an ideal spot to put up a vertical wire. See, I told you I was in the happiness business. I obliged Jim allowing him to make these QSOs! 🙂 Photo credit: Tim Carter – W3ATB

Within 20 minutes Jim had two or three more QSOs. He was in hog heaven.

An hour later we were back at the parking lot and headed home. It was a day I’ll never forget!

11 thoughts on “Cannon Mountain and The Flume Adventure”