At 7:35 a.m. this morning I was greeted with an email from my great QRP mentor Jim Cluett, W1PID. He’s always pithy and often has secret messages embedded his email.

Here’s what he sent:

“There is some chance I’ll go up the hill in Franklin today.”

“Do you want to come with me out in the cold, claw our way to the top of the ice-crusted Veterans Memorial Ski Area hill to see why the Franklin 147.300 repeater is operating on battery power and do some QRP radio at the same time?”

Nine days earlier we had a wicked snowstorm in New Hampshire that caused massive power outages because of a heavy wet snow that brought down power lines all over the state.

It was cold when I read Jim’s message, just 15 F, but I saw the forecast was temperatures that might make it up to 30 F. It never made it, topping out at a brisk 26 F.

Jim and I met for lunch at the Tilton House of Pizza and he was kind enough to pay for the great food. We needed the energy for our adventure.

Mark Persson, W1DDI, joined us for the last half of lunch. He’s the repeater coordinator for our Central New Hampshire Amateur Radio Club and was happy we were going to go up to see what was going on with the repeater.

Jim and I had planned to take advantage of the altitude of the hill we were about to climb and do some HF work on 20 meters once we determined the problem with the repeater.

It didn’t take long to get to the site. You park at the base of the quaint Veteran’s Memorial Ski Area in Franklin, NH. This tiny ski hill is a piece of NH ski history as most ski areas fifty or more years ago were just like this before the mega resorts and taller ski hills sucked customers away like a tractor beam.

Just a day or so earlier we had a moderate snowfall followed by some freezing rain. This made the snow very slippery and crusty. To ascend the 225 feet of elevation change, you needed some sort of traction devices on your boots. Jim wore Yak Tracks and I put on my Kahtoola MicroSpikes. 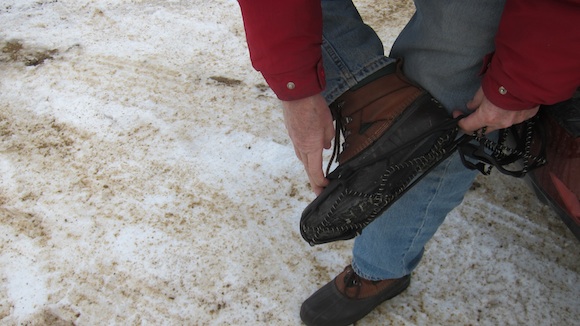 “I think we should use this trail made by the snowmobile to get to the top,” Jim said. It was a wise choice as the belt chewed up the snow and made the walk up the hill much easier.

The climb to the top only took about fifteen minutes with a few rest stops along the way. In no time we had determined that the power was out to the repeater shack. It was now time to set up an antenna before we got too cold.

While Jim was unpacking, I got out my tiny Baofeng UV-5R HT so I could attempt to help a fellow ham, Herm Weber – KB1RJC, activate a mountain 50 miles northeast of where Jim and I were. Herm’s a SOTA fan and was on 146.520 Mhz. When I heard him, I was in the middle of a minor pileup of hams waiting to talk to him.

As all this was going on Jim was getting ready to erect his 20-meter dipole antenna. We had decided to put it up as a sloper because it was faster and easier. One end of the antenna needed to be hoisted up into a juvevnile tree next to us.

We’ll never know what happened, it could have been a vitamin deficiency or a snowflake that flew into Jim’s eye, but his first attempt at getting the halyard line up and over the correct branch in the tree resulted in a wretched tangled water bottle stuck up just out of reach. 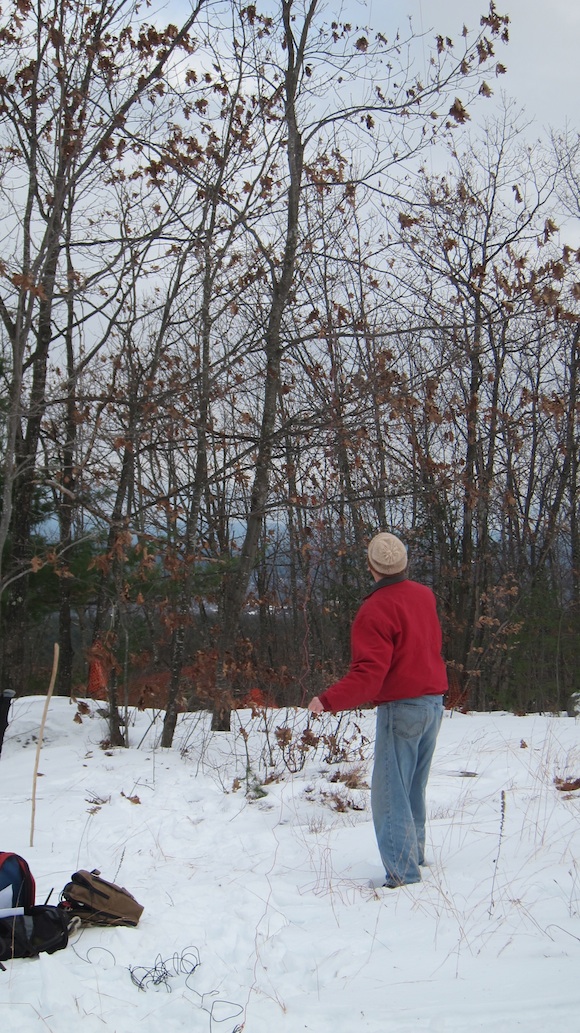 Here’s Jim getting ready to hoist the amazing dipole antenna up into the tree. Photo credit: Tim Carter, W3ATB

Jim saw I was finishing my QSO with Herm and politely asked for my help in getting the water bottle down from the tree and the antenna up in the air. Within minutes we were on the air.

“We don’t have much time. By fooling around with this antenna, our hands are going to be too cold to operate,” Jim lamented.

“Quit your whining. Let’s get on the air and do a few QSOs,” I exclaimed ready to test out my improving CW skills.

It didn’t take Jim long, since he’s a CW and QRP pro, to snare XE1RK down in Mexico. Ralph was in Mexico City and gave Jim a solid 559. That’s not bad from the so-so antenna we had erected.

Next up was my QSO with Vic, WB2U. He was calling CQ and Jim helped me decypher some of Vic’s fist as I either had fluff in my ears or he was running his di’s and dah’s a little too close to one another for me. 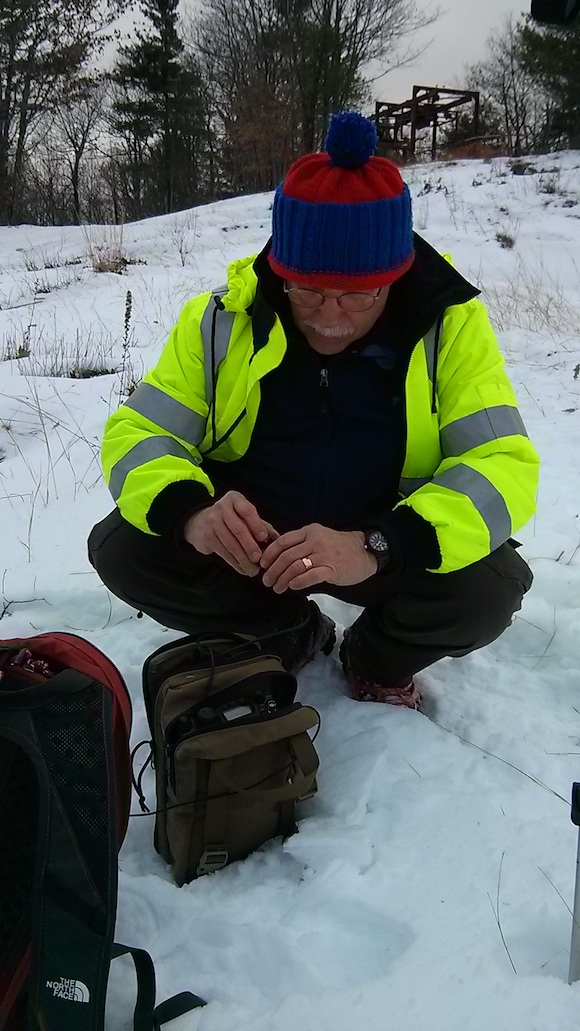 I was using Jim’s outdoor key for the first time that works like half a paddle. I had a hard time hearing the side tone and my fist must have sounded horrible.

It was Jim’s turn next and he quickly found Sam, WZ4L down in TN. Sam gave Jim a 599 so the propagation, the little Yaesu 817 and the antenna were doing a superb job working south on that day.

“Let’s get going. My feet are cold and a cup of coffee sounds good about now.” Jim always is full of good advice and within a few minutes, all the gear was back in his day pack and we were headed down the hill.

Earlier in the day when the adventure was first floated, I thought it might be too cold to operate, but I was wrong. Had it been windy, we would have been frozen in minutes, but fortunately the wind was light. If the sun had been been out, we would have been snug as bugs in a rug.

As we were drinking our coffee and munching on our doughnuts, we relived the experience and were laughing out loud. I’m sure the young sales clerk thought we were two crazy old goats. Perhaps she’s right!