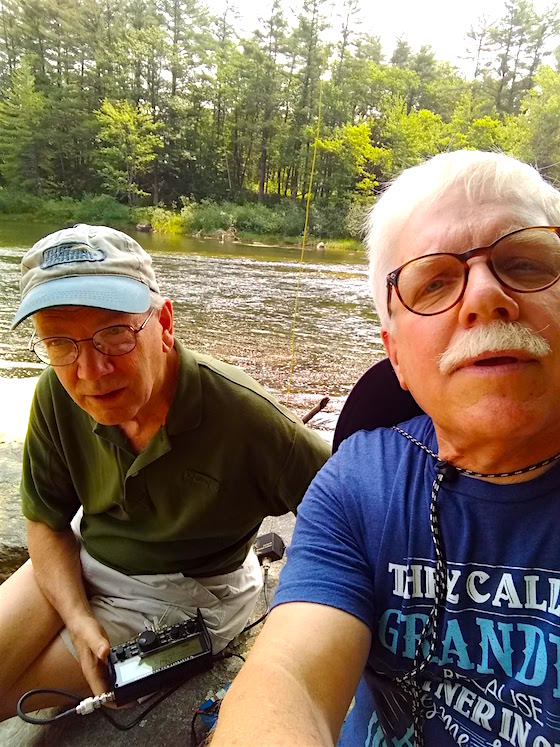 Jim is wearing the ball cap with the Elecraft KX2 in his hand. I’m deeply entranced with the selfie phone making sure both of us are in the frame. Copyright 2019 Tim Carter

Today my mentor Jim Cluett, W1PID, took me to one of his favorite hidden places to operate. We were along the bank of the Winnipesaukee River near the boundary of Tilton and Franklin, NH.

We had to hike about 1/4 mile along an abandoned spur of the Boston & Maine Railroad line. The mainline tracks have been removed and a hiking and bicycle trail now runs where steam engines used to travel loaded with freight and passengers back in the 1800s.

The parking lot, as well as the trail, had an abundance of wild daisies, goldenrod in full bloom, and yarrow. There was also poison ivy galore. Jim and I are both very allergic and I’m always on the lookout for that wretched plant.

The portion of the trail we were walking along wasn’t that close to the river and I was wondering if we’d ever see it. Then, just as I was getting frustrated, Jim turned left at an old non-descript gated area. We headed into the forest at this point.

“Do you hear the river?” Jim exclaimed after a minute.

Within minutes this is what we saw. 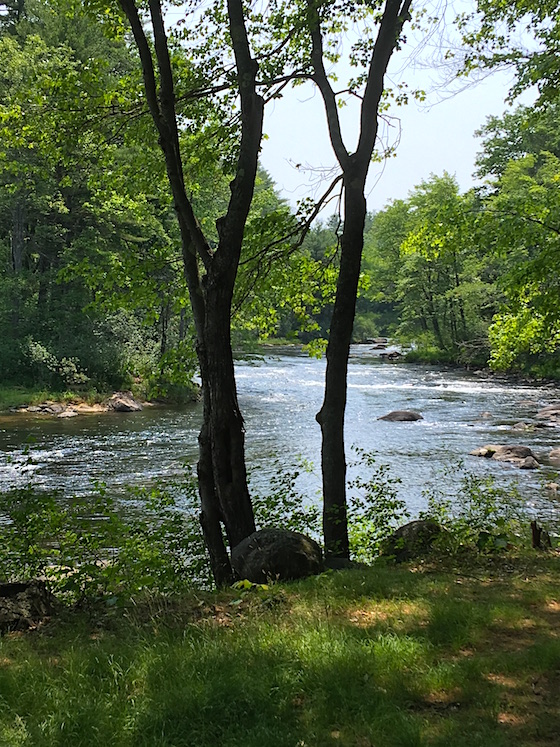 This is looking upriver from the tiny cape we were sitting on. The sound of the rapids was quite soothing. Copyright 2019 Jim Cluett

We walked down to the bank of the river and there was a small cape that stuck out into the river. I’d estimate the cape was about 25 feet in diameter.

The upstream side of the cape was protected from erosion by large boulders. Local teenagers have made it into a party location including a nice boulder that serves as a firepit.

Jim decided to try to get his halyard up to hoist the antenna. His first throw failed. I got out my water bottle and string and was fortunate to get a perfect throw. There was minimal space to belay the cord and the throw had to be just right. I’ve gotten pretty good at throwing the water bottle and within minutes the 29-foot wire antenna was dangling perfectly over a large rounded boulder we both sat on.

I politely asked Jim to connect the dangling end of the 24-gauge wire to the 9:1 unun while I unpacked the radio and other gear.

It was a hot and humid day but we were in the shade and there was a slight breeze to keep us comfortable. Luckily we heard signals as soon as we turned on my Elecraft KX2 powered up by a freshly charged BioennoPower 3 Ah LFP battery.

I let Jim use the radio first and within minutes he had snagged GB19CWC and W5LNI. Here’s a very short snippet of the conversation Jim had with W5LNI.

Getting QRP contacts using a tiny thin wire in solar minimum conditions is always a treat. We were lucky to get three total QSOs in less than 30 minutes.

Jim captured me concentrating on Bunky’s message. He was sending a bit faster than I can copy at this time, but I got some of it. Copyright 2019 Jim Cluett

I then took control and within a few minutes had Bunky on the hook, K4EJQ. Bunky was contacting us from Bristol, TN. His signal was so strong I thought it was going to break the tiny speaker in the KX2. My tiny 5-watt signal was good enough for a 599 signal report, so that was quite nice.

We decided to pack everything up after my short conversation with Bunky. I told him we were on a hike and low power. After I publish this story, I’m going to email Bunky to let him see where we were. Often other operators are amazed at what Jim has done for years and has been kind enough to share with me – the magic of making contact with people outdoors in the most wonderful places.