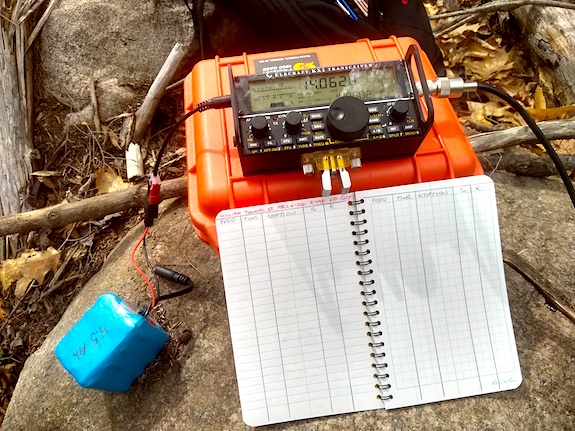 This is my Elecraft KX2 amateur radio. I used it to contact 22 other radio operators in just 40 minutes using Morse code. No, the contacts were not ghosts with invisible callsigns. This photo was shot before I started. Look below for the logbook with all the callsigns in it, silly.

Today I did a last-minute amateur radio adventure with my very good friend Jim Cluett, W1PID. We decided to go to the William Thomas State Forest just north of Hill, NH. It’s a wonderful state forest with a delightful road that cuts deep into the forest.

The 1,700-acre tract of land was owned by William Thomas, Jr. He was a geologist that passed away in 2001. He was a B-24 Liberator pilot and used his discharge pay to purchase the first 60 acres of the eventual 1,700 he’d come to accumulate over the next fifty-five years. These small tracts of land which are now one create an unbroken natural landscape between Wade State Forest and the Pemigewasset River wetlands to the east. He gifted this land to the state of New Hampshire upon his death.

My goal was to activate this state forest. It’s both a Parks on the Air entity K-4981 and a World Wide Flora and Fauna entity KFF-5224. You officially activate a public space like this if you make contact with a minimum of ten other operators within a 24-hour period. 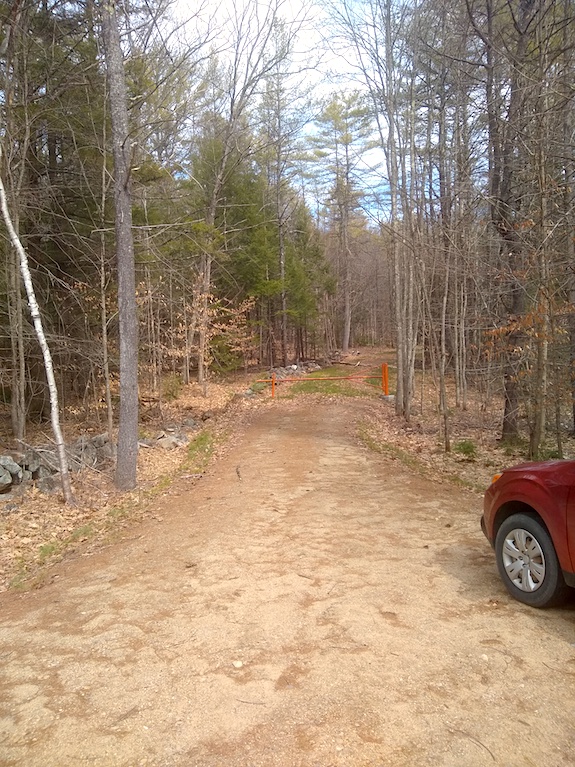 This is how you enter the William Thomas State Forest. The gate was locked. That’s fine, we wanted to walk anyway for the exercise and to soak up the quiet beauty of this little-known state asset.

The weather was perfect for an early spring hike. The temperature was in the mid-50s F with a mostly cloudy sky. I don’t know if one could order up better weather. 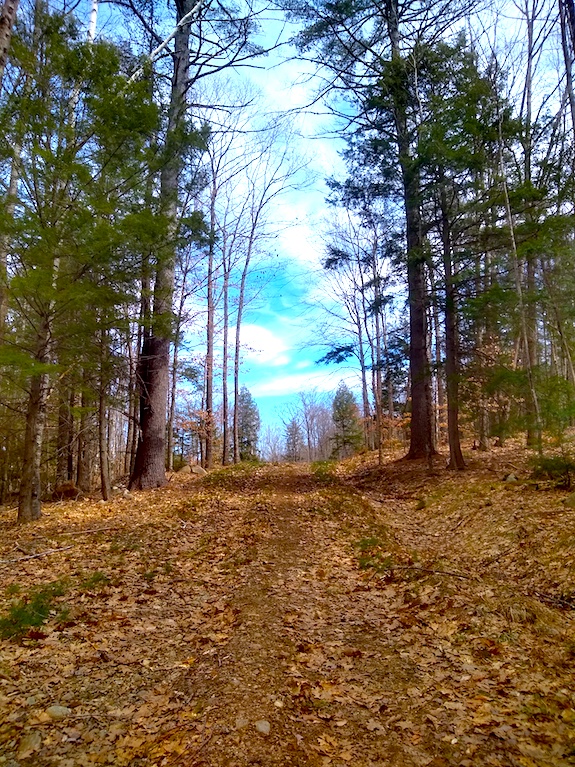 We’re coming up to a clearing that served as a log yard. I estimate this was about 1/2 mile from the gate.

The road that cuts east/west through the forest was very well maintained. There were a few fallen trees but it was easy to climb over them as we wound our way deeper into the forest. 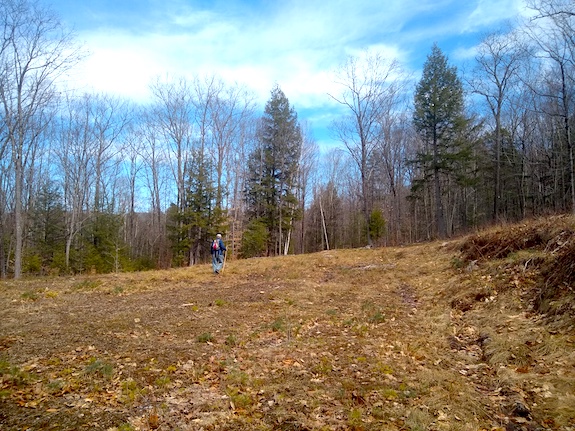 This is the 3/4-acre clearing that served as a staging area for logging trucks to load up timber to take to local mills. Jim and I think it was logged about five years ago. But we could be wrong.

After walking about 15 minutes, I found the exact spot I wanted to set up my equipment. There was a perfect branch up about 40 feet hanging just beyond a somewhat flat rock that would keep me from sitting on the damp ground. 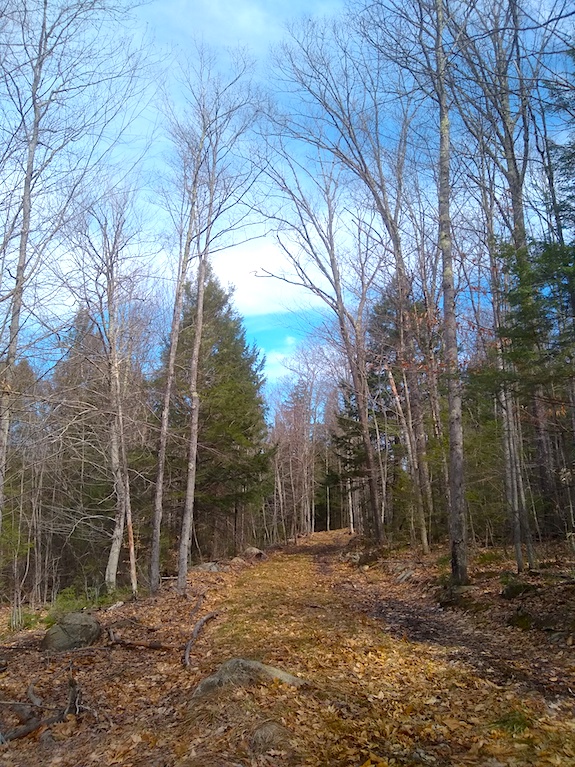 That one solitary branch in the white clouds above the blue patch at the center is what I decided was going to support my 29-foot vertical wire antenna. I snared it the first throw with my water bottle.

Jim decided to keep walking farther down the road to set up his own radio equipment. He says it’s no fun watching me record a contact just about every minute. He’d rather fill his own logbook. I couldn’t agree more. 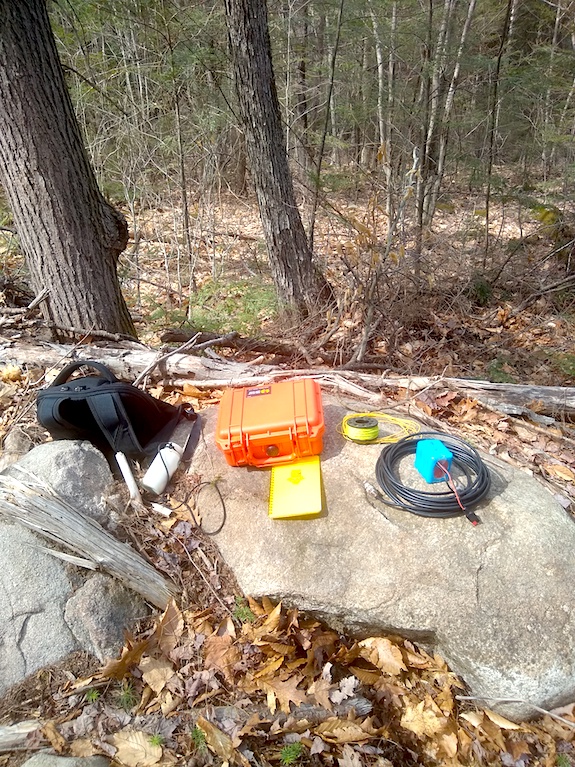 I’ve got my gear out and am minutes away from sending CQ POTA DE W3ATB. My antenna is on my fantastic Trident finger reel next to the orange Pelican 1200 case. Inside the case is my 9:1 unun that attaches to the bottom of the 29-foot wire antenna. The blue block is my 4.5 Ah BionennoPower LiFePh battery. It’s surrounded by 25 feet of coax cable.

It only took about ten minutes to set up. I decided to make contacts on the 20-meter band first because I was hoping to get a few European operators. There are quite a few who are very active in the World Wide Flora and Fauna radio program. I was fortunate to contact Jari, OH1XT, in Finland and Reg, G3WPF, in England. We call these DX contacts because they’re international.

Not wanting to slight my Canadian neighbors, I also put VE3LDT and VE3ZN in my logbook on this adventure!

My good friend Jess Guaderrama, W6LEN, was kind enough to spot me on the Parks on the Air website as well as the WW-FF site. This almost always guarantees that you’ll get the required ten contacts to officially activate the entity.

After gathering fifteen contacts on the 20-meter band, I switch to 40 meters. The 40-meter band allows me to make contact with operators that are closer to me. I was able to add seven more contacts before no one else answered my CQ.

I was only on the air for 40 minutes and made 22 contacts. I was really happy with that count. As the weather gets warmer and I get out earlier in the day, I’ll stay on the air longer. 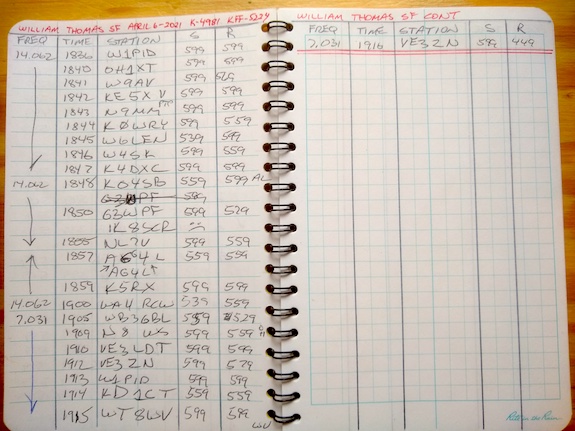 The operator from Italy couldn’t hear me. Too bad so sad! Twenty-two contacts in 40 minutes is nothing to sneeze at, but it’s by no means expert work. Some POTA and WW-FF operators can log a contact every 30 seconds.

As Jim and I walked back to our vehicles, we stopped for a moment along a small brook that runs under the forest path. There are countless tiny streams like this all over New Hampshire and in early spring they’re carrying the last of the snowmelt towards the oceans. 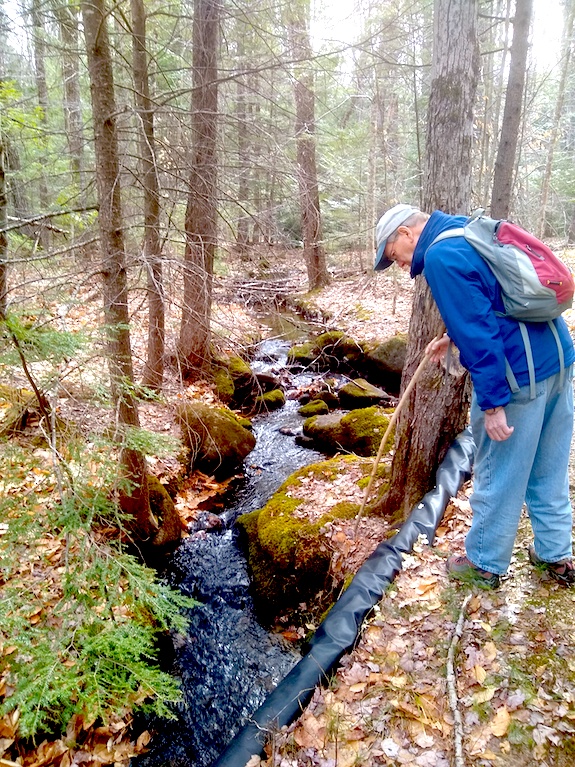 I don’t believe Jim was going to fish with his walking stick, but one never knows!