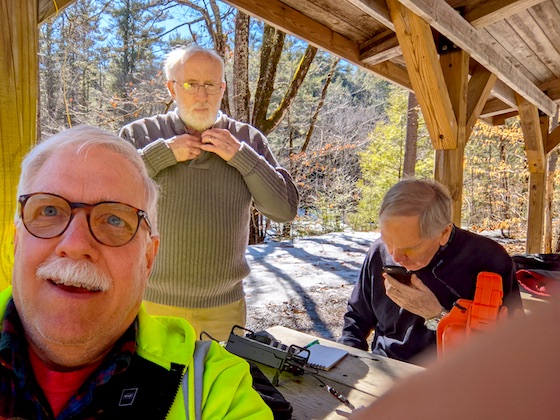 The Three Amigos at Profile Falls just south of Bristol, NH. It was a stunning late-winter day just before the spring equinox. I’m in the lime-green jacket, Dave Benson, K1SWL, is in the gray sweater, and Jim Cluett, W1PID, is in deep concentration looking at my Rite-in-the-Rain logbook.

“Listen, it’s going to be 50 F and sunny today. Let’s get out. We can maybe walk down to the Pemi at Profile Falls if the ice has melted or just operate in the shelter next to the Smith River.”

It was just after 10 AM the day before St. Patricks Day and Old Man Winter was still hanging around like that friend sitting on your couch who doesn’t know it’s time to go home on a Saturday night.

Jim Cluett, W1PID, loves spring. It’s his favorite season and he knew from years of operating outdoors that an outing today would create memories of a lifetime. Little did both of us know that today was to offer up two delightful treats.

“Guess what?” I replied. “Minutes ago I got an email from Dave Benson, K1SWL, that he’s on his way to pick up a vacuum cleaner from a Laconia repair shop. I’ll reach out to him to see if he’d like to join us and get back with you shortly.”

“Good.” Jim has always been frugal in the spoken-word department unless it has to do with what it takes to create an outdoor radio station that has everything you need and fits in the smallest possible container.

After making a few phone calls, I tracked down Dave, he called me back and we agreed to meet at the Bristol, NH House of Pizza for lunch at noon. It was still gray and a chilly 38 F as I was about to walk out the door, but patches of azure blue sky were starting to create ragged polka dots in amongst the puffy clouds that floated overhead on their journey to the east.

By the time I arrived in Bristol at the overpriced House of Pizza parking lot, nary a cloud could be seen and the temperature had soared to 50 F. Jim was already there and Dave was soon to arrive. We ate lunch and headed for Profile Falls just about two miles south of Bristol, NH on NH Route 3A.

Profile Falls is at the northern end of a giant parcel of land owned by the US Army Corps of Engineers. The Smith River tumbles down about 50 feet over some very hard granite to create the cascade. 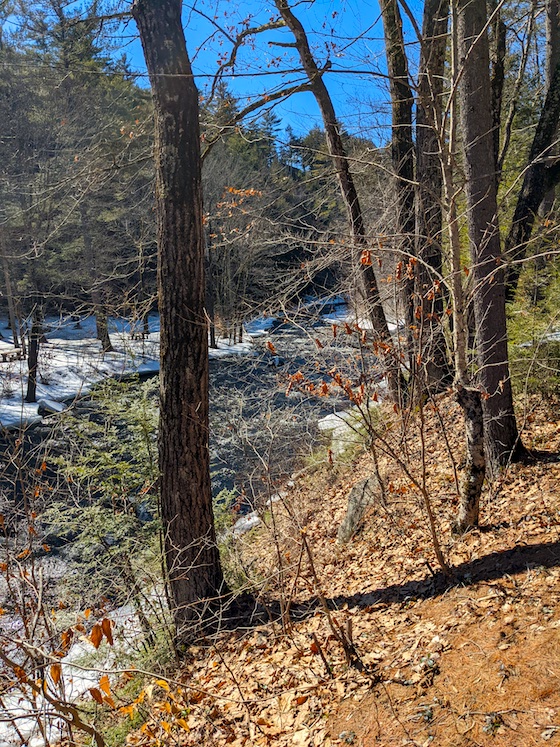 This is the scenic Smith River just about 200 feet below Profile Falls just around the bend at the top of the photo. The river was swollen with snowmelt.

Many years ago the small town of Hill was nestled along the shores of the Pemigewasset River. As the population of New Hampshire began to swell, annual river flooding became a nuisance so the Corps constructed the huge earthen Franklin Falls Dam about eight miles from Profile Falls. As part of this project, the Corps relocated the town of Hill up onto Route 3A. When the Pemi floods, the dam holds back so much water it can actually back up and flood the lowlands that are quite close to the falls.

This hidden jewel of woods, abandoned roads, and fields is one of Jim’s favorite places to visit. Once you experience it, you’ll see why. Not many people visit the miles of solitude and that’s exactly why it’s attractive to Jim. It took me a few years to develop the same attitude as now I don’t want to interact with any other humans when I go out for an outdoor radio adventure.

Once we arrived at the ice-covered parking lot that’s adjacent to the two-track road that leads down to the Pemigewasset River, we noticed Dave didn’t have the right shoes to hike the 1/3 mile down to the picnic tables on the river bank. We moved our vehicles across the street and set up my Elecraft KX3 on one of the three picnic tables under a wonderful open shelter. Jim and I have operated here many times before including one miserable cold rainy day in December a few years back. It was a day both of us will never forget. 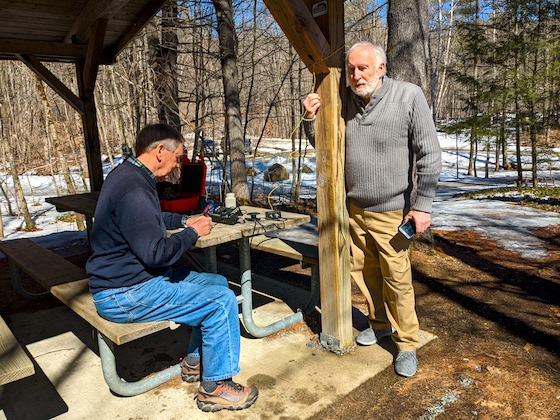 Jim’s on the left working an Italian Award Station and Dave Benson is possibly thinking about the pepperoni pizza he ate in the past hour.

While I was setting up my radio, Jim threw my water bottle up into a nearby tree to get our halyard up. His throw wasn’t the best, but that’s because Old Man Winter hindered him from doing any outdoor adventures other than setting up on the deck at his home.

Dave and Jim mumbled something about me being able to snare a better branch, so they stepped back and indicated it was my job to do the next throw. “Come here and look up,” Jim said. I did as my mentor suggested and there was this very narrow opening in the dead branches of the trees above to send the small water bottle up into the heavens above.

I was also a bit rusty and made a barely acceptable throw as the nalgene water bottle bounced off the trunk of one of the trees and bounced around until it captured a dead branch. We had just enough height to pull up my 29-foot vertical wire that was attached to a 9:1 unun up into the tree. Within minutes the radio was on and we were beginning to hunt for someone calling CQ. That’s always how we snare contacts out of the ether.

Trying to send CQ ourselves using a low-powered radio like my Elecraft KX3 is like calling for help deep in the wilderness of the White Mountains of NH. Rarely will you be heard. Jim has taught me over the years that if we hear strong signals coming into the radio, there’s a great chance our weaker signal radiating from the wire antenna will be heard by that operator. 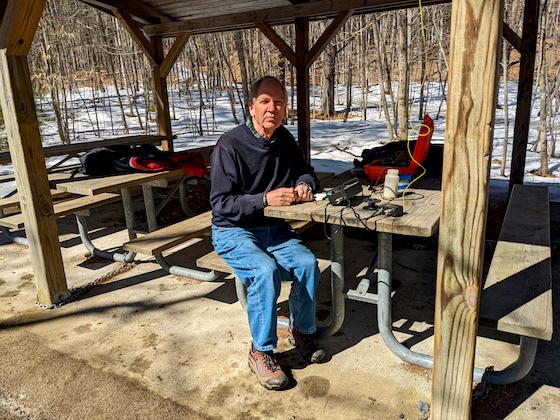 Doing outdoor radio is serious business. When you go out on an adventure, getting even one QSO is sometimes wanted more than life itself! While he doesn’t look happy, trust me Jim is almost as happy as fleas are at a dance party.

Minutes later all three of us had made contact with Colin, GI0RQK, in Northern Ireland. His signal was very strong and all three of us made contact. Jim was first, I was second, and Dave brought up the rear. Colin sent back signal reports of 599 to all of us.

Jim and Dave then decided to get up and enjoy the toasty sunshine and the view down to the Smith River. It was roaring past us filled with cold snowmelt that was just beginning its journey to the Atlantic Ocean. Watch this video I shot of the water tumbling over the rounded boulders in the river bed.

I sat down and tried to find another operator. Soon I heard Jose, EA4HKF, calling CQ from Spain, but he didn’t respond. Such is the life of a QRP radio operator.

I then started to spin the VFO knob and all of a sudden heard, CQ CQ CQ N3AO.

“HEY! Carter Craige is calling CQ!” Jim and Dave both turned around and Jim had a smile on his face. I immediately sent back my callsign, W3ATB, and Carter said to stand by.

I was so excited! Carter’s wife Kay is the past president of the ARRL and I had the pleasure to meet both in person eight years ago at the ARRL Centennial Convention in Hartford, CT. Carter, Jim, and I took a break from the convention and discovered a well-hidden ice cream cone stand in downtown Hartford.

Carter came back on the air and he was just as excited as I was. I told him Jim and Dave were also with me and all three of us made contact. Jim and Carter’s friendship spans a few decades and he and Carter had an extended conversation.

Once we finished talking with Carter, we decided it was impossible to create more happiness so we broke down the station. I marveled at the magic of being on the air at that precise moment on the correct frequency to hear Carter calling CQ. It really made my day as he’s a good friend even though I’ve only eaten ice cream with him one time!

Spring will be here in central NH in full force within weeks and you can bet Jim, Dave, and I will be out more often. I sure hope to put Carter in my log several more times. As Kenny Chesney says in his past hit song, “…only time will tell, but it ain’t talkin’.”