“Jim, you were standing too close. You should stand back here to get a better angle.”

It had been three and a half years since I had heard my mentor Jim Cluett, W1PID, get upset about throwing a water bottle up into a tree. Moments before blaming the bush, Jim had let loose of a short length of parachute cord that was wrapped around the neck of the bottle. The other end connected to a thin polyester cord that would act as a halyard to pull an antenna up into a tree. 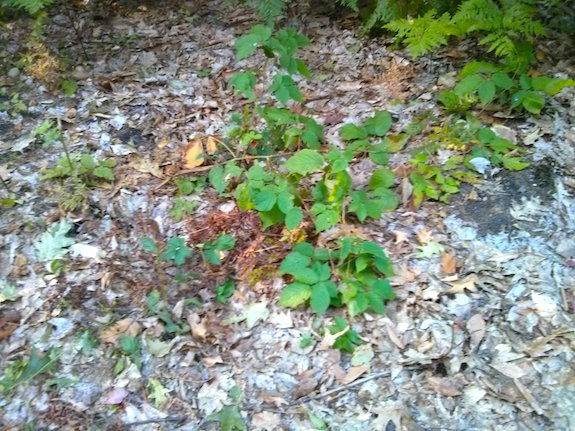 This is the wicked thorn bush that grabbed onto Jim’s polyester cord and stopped the vertical ascent of his water bottle. Copyright 2017 Tim Carter

I was quick to notice this anger issue is apparently weather related. The last time there was a foot of snow on the ground, a stiff wind was blowing and the sky was a layer of lead that looked like it could drop on us at any time.

In those conditions you have but minutes to get on the air before your fingers become too numb to be effective. The last thing you want is your partner playing patty-cake on 2 meters while you tussle with a tangle in a line.

Yesterday was the opposite. It was an unusually hot and humid early fall day in central New Hampshire. The lack of recent rain plus the heat made the leaves all around us like ancient brown brittle pieces of parchment. They crackled as we walked and sat on them.

The branch Jim was trying for was but 35 feet off the ground. It was an easy toss. He’s made ones like this countless times on other outings. My guess on those days he was surrounded by unicorns, rainbows and mild weather. 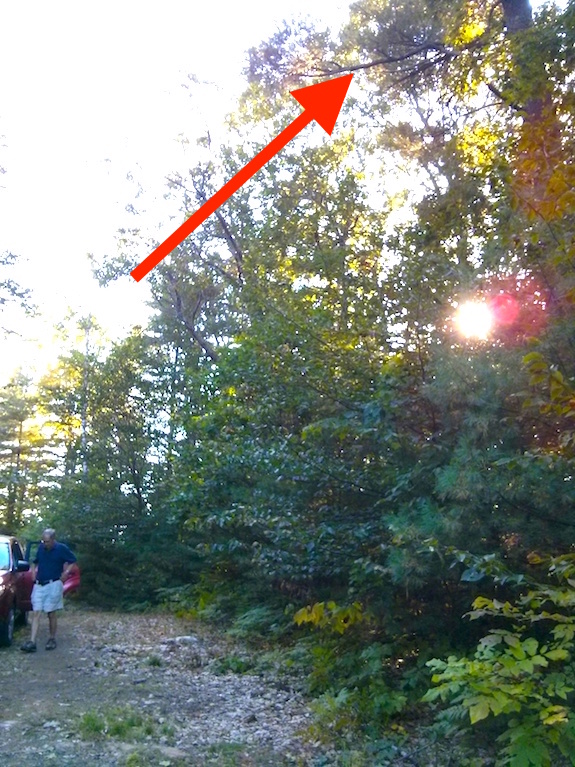 The red arrow points to the pine tree branch that was waiting for Jim’s easy throw. The evil thorn bush is just at the edge of the leaves at the bottom of the photo. Jim next to his car stewing about the branch. Copyright 2017 Tim Carter

Prior to setting up our equipment Jim and I had worked up quite a sweat out in the brilliant sunshine on 90 acres that I own. The back of my truck was loaded with brush-cutting tools, a bucket of brass and other gear. It’s that time of year to improve the look of the land and to do clean up.

Jim and I had decided to see how a resonant 20-meter dipole antenna would compare to a 33-foot vertical wire when connected to two Elecraft radios. I had my new KX2 and he brought his time-tested KX3.

We had set up at the end of the gravel driveway at the top of my land. We were in the shade and that made it tolerable.

The axis of the resonant dipole antenna was almost perfectly NE – SW. While we tried to get the other antenna perfectly vertical, it probably had a 3-degree slope to the northeast.

We connected the radios to the antennas and got to work. I connected the resonant dipole to my new Elecraft KX2. Jim connected his Elecraft KX3 to the 33-foot wire with a 9:1 unun to help bring down the resistance on the simple wire. 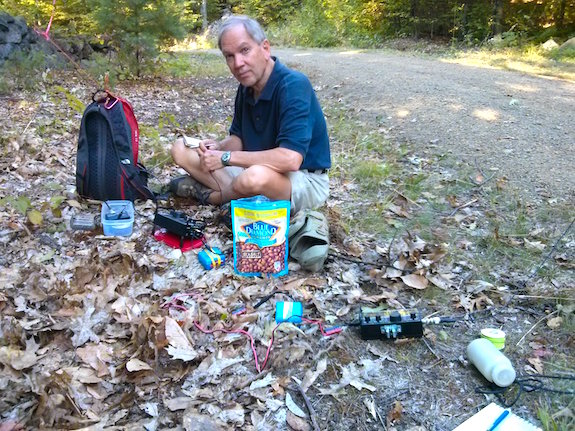 Fortunately 20 meters had some activity. The first station we both worked was HB0/DL5YL. It was Tina.

She was pretty fast for me running I suspect at 20 WPM or better. Jim could easily copy her and he worked her first. 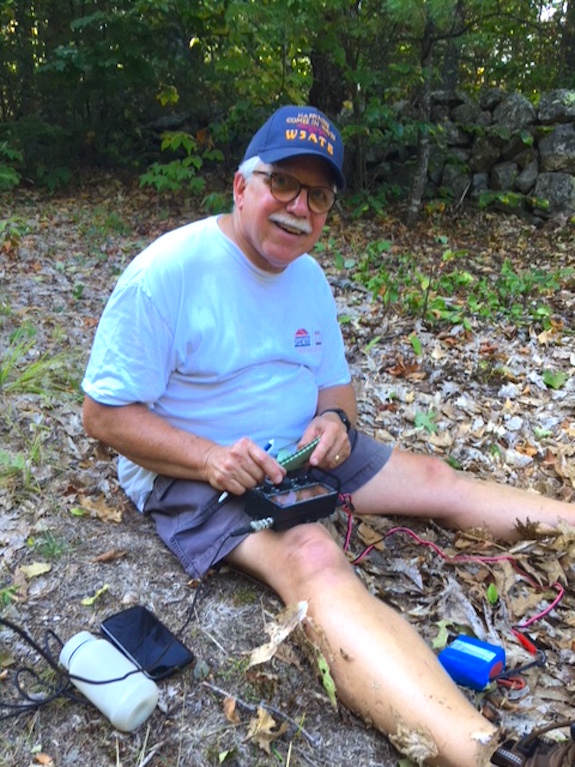 Here I am trying to be comfortable on the dry leaves and bumpy ground. The KX2 sure is small! Copyright 2017 Jim Cluett

It was fascinating that her signal strength was the same to both our antennas, but Jim didn’t seem too amazed by that.

After Jim signed off with Tina, I sent out my call sign using the very compact Elecraft paddles that connect to the front of the KX2. I call them mini Begali paddles. 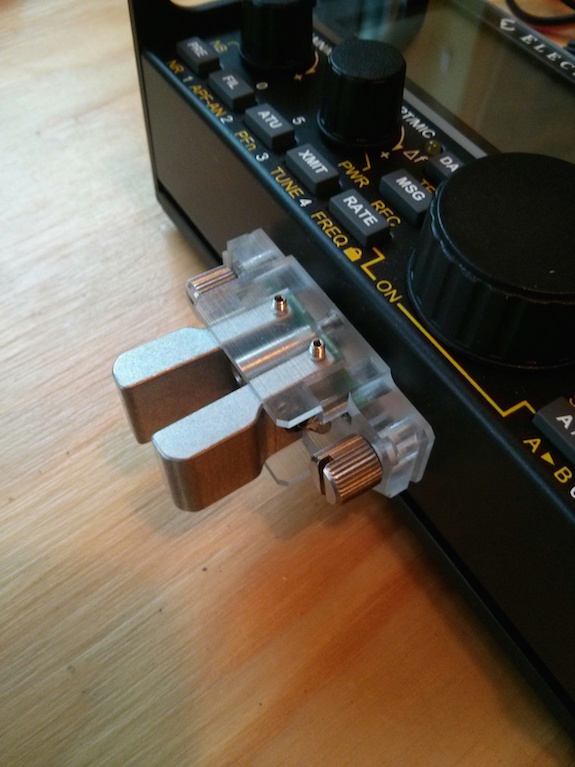 These are the Elecraft KX2 paddles. They fit a KX3, but you need an optional thumbscrew. I love them. They work really well.

They work surprisingly well when you get the tension adjustment so all the slop is gone in the back and forth movement.

Tina gave me a 559. I was pretty happy with that considering my 5 watts of power.

“She sent 88. Do you know what that means?” Jim was quick to point out as she was signing off with me.

“Yes, hugs and kisses. I’m not a complete dolt you know.”

We both started to spin the VFO knobs on our radios and came across AD9Y. He was blasting out at 100 watts but said the QSB was bad and he couldn’t copy my call sign.

Jim tried him several times and really extended the space between each letter / number of his call sign. It worked and Jim had an extended conversation with him while I got up and stretched my legs.

My only other contact was with HG14HST. He was so strong to both Jim and I that I thought he was behind me. As you’d expect, I got a 599 signal report. He was smoking fast and I had trouble sending my call sign at the faster speed not being used to the paddles.

Jim had worked a few other stations that were far too fast for me. We decided it was time to leave and packed up the equipment.

As far as we could tell with this simple non-scientific test, there was no real difference between the dipole and the vertical wire. Incoming signals registered the same on both radios and we both got the same signal reports from the operators we worked.

Once everything was packed away, Jim said, “I’m not leaving here until I get that bottle over the branch.”

He set up his gear one more time and made a perfect throw. 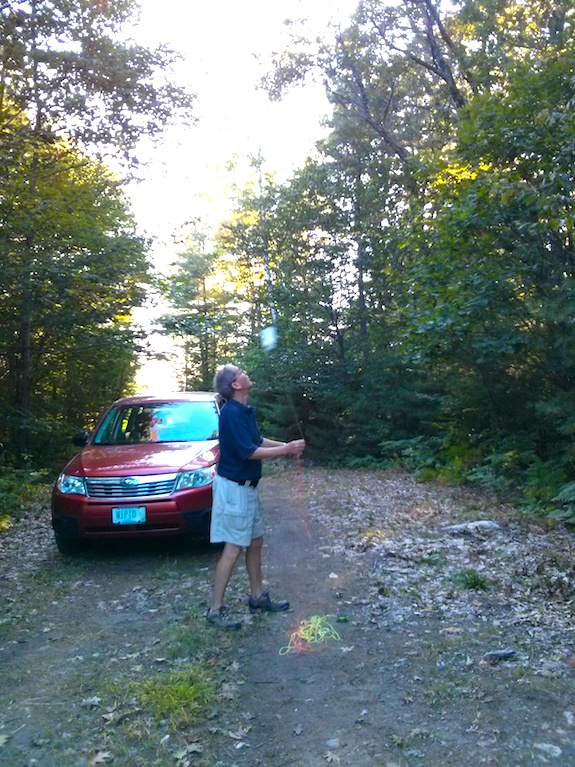 Here’s Jim twirling his water bottle just a fraction of a second before letting it fly. You can see the blurred bottle to the right of his head. Copyright 2017 Tim Carter

That’s one of the many things I love about Jim. He’s not a quitter. He wasn’t going to let that thorn bush get the best of him!

As you might expect, it was a very fun day I’ll never forget. When Jim gets upset, it’s short-lived and laughter soon follows any frustration.

We both know that soon the snow will be flying in that same spot. Who knows, we may go back on a frosty day to see if we can get that bottle over the tree in one throw!