“The copper in those cables came from the famous, and now-closed, Anaconda Copper Mine in Butte, MT. You can’t get that copper anymore,” I exclaimed with a straight face. It was late morning on the first day of New England Amateur Radio fest (NEARfest) and I was busy attracting customers who were digging through a wide assortment of ham radio accessories, radios, power supplies and who-knows-what stacked in boxes.  Some of the gear was donated to the Central New Hampshire Amateur Radio Club (CNHARC) over the past few years and months by former club members while the rest was being hawked by current members.

Just a few hours before, Dick Christopher, N1LT and I were in a long line of cars and trucks waiting to pass through the gates to set up to sell. It was opening day, October 11, 2013, blessed with sunshine and balmy temperatures. 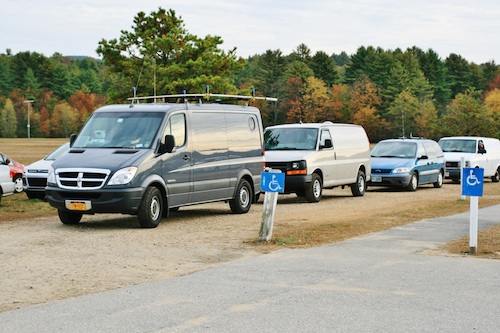 Hundreds of other cars and trucks were in line just like this waiting for the gates to open. Photo credit: Glen Aldrich, KB1AAI

NEARfest is held twice a year at the massive Deerfield, NH Fairgrounds complex. A two-day affair that begins on a Friday, you can visit with friends and put a face with a call sign of those hams you’ve done QSOs. You can also walk by countless tables loaded with new, not-so-new, and ancient ham radio gear, and attempt to resist the food trailers loaded with hot Italian sausage, bread bowls of spaghetti and ice cream and apple fritters.

Hand over an extra $10 and you can set up your own table to convert all of your dusty junk, er treasure, in your basement or garage into cold cash. As crazy as it sounds, there’s a buyer who’s looking for what you have to sell. Your biggest challenge will be keeping the sweet moola in your pocket as you’ll be tempted to purchase some of the great gear on other tables.

The day before I had loaded up my massive Super-Duty Ford F-250 4×4 with tables, chairs, and countless boxes of donated gear. Glen Aldrich, KC1AAI helped us set up the tables and unload the truck. Buyers descended upon us like flies at a summer picnic as we put boxes of gear onto the tables.

It was bedlam. Some were other vendor vultures looking to cherry pick our best stuff and get it for a low price. A few succeeded in the confusion. Quite a few things we sold in the first twenty minutes could be found on display at other vendor tables later in the morning. 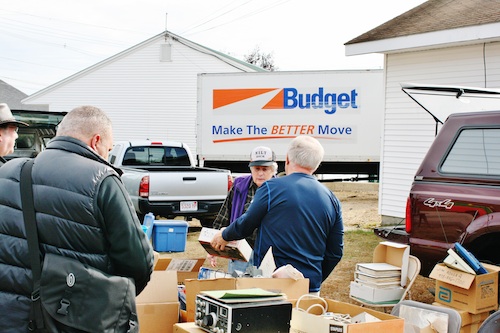 Tim Carter, W3ATB with back to camera asking Dick Christopher, N1LT how much a certain POC, er I mean treasure, is worth. Photo credit: Glen Aldrich, KC1AAI

“That item is museum quality,” I said without blinking as I was trying to convince a fellow ham he needed an ancient headset. Its plastic parts, now hard as the Rock of Gibraltar, used to bend as easily as a ballerina.  I  remember seeing an identical set on display when I spent a half day at the spacious Ham Radio Museum at the ARRL headquarters in Newington, Connecticut.

Other CNHARC members were at the giant flea fest. Just about everyone stopped by the table at some point. A few pitched in to help sell. Here’s a partial list of CNHARC members who I saw:

“Five bucks a box! Pick up a box and fill it for just five bucks,” barked Andy Bourassa, W1LJJ. It was mid afternoon and there was still lots of junk, er great gear, that had to get transported into other operators basements where it would gather even more dust.

“Tim, you need to sell it baby. You can’t just stand here and hope they buy. Draw them in!” Andy, no doubt, was in training mode to take the place of our dearly departed Billy Mays. Believe me, Andy would do a marvelous job of selling anything. 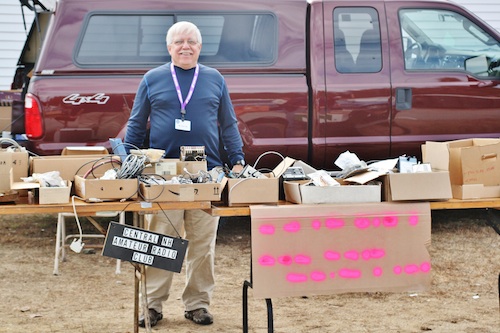 I wondered why no one was coming up to “make oqqer”. This is what you get in 30 seconds with a can of spray paint and an idiot learning CW. Photo credit: Glen Aldrich, KC1AAI

Earlier in the day those of us at the CNHARC table took turns walking around the grounds by ourselves to grab a deal or a bite to eat. One or two people could be found at the club table throughout the day. Dick Christopher took off first to visit with friends and look for a few special connectors.

Just before noon I was standing in line to get a hot Italian sausage with a bunch of other hams, I couldn’t help but overhear the conversation of two men behind me even though they were talking very low. I cocked my head a couple of times to dip a little deeper into their hushed conversation.

“I need to select a minimum of 40 random people to go behind the curtain. I’ve only got fifteen so far. Were doing a statistical sampling,” one of them said.

What curtain was he talking about? I couldn’t resist. I had to ask.

I turned around, saw a middle-aged man wearing a Yaesu logo shirt and said, “My major in college was math and I have a masters degree in statistics. You’re correct. Forty is the smallest sampling size if you want to get reliable results of a test, ” I offered up that little-known jewel about statistics trying to probe to see what they were doing. The other man had on an ICOM logo shirt. They acted like friends even though they’re competitors. 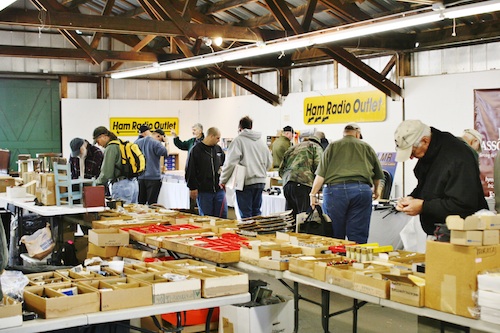 This is the typical scene inside the covered buildings at NEARfest. The secret Yaesu booth was just to the right. Photo credit: Glen Aldrich, KC1AAI

They must have been exhibiting for their companies, although I had yet to see the Yaesu and ICOM booths. Because my hunger got the best of me, I hadn’t scoped out the entire fairgrounds just yet.

“Tim, after you eat, why don’t you stop by our booth in that building over there. You seem to be pretty savvy. I’ve got some things I want to show you.”

“Sure, I’d be happy to see your new products if that’s what this is about.”

“I’ll be there just after I inhale my Italian sausage. I had two pumpkin-spice doughnuts for breakfast and am just coming out of my sugar coma.”

The sun was warm and I found an empty seat on the wood picnic tables that protected the flank of the sausage trailer. I got into a conversation about antennas with an Elmer. I told him I was about to build a multi-band zepp center-fed dipole. 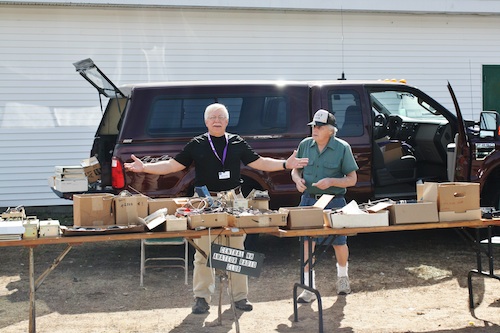 Tim Carter, W3ATB (in black t-shirt) and Dick Christopher, N1LT about 2 p.m. The sun was out and we were quite comfortable. Photo credit: Glen Aldrich, KC1AAI

“Be sure that thing is off the ground about 40 feet if possible. It’ll really work swell if you make it an inverted V.”

“Well, I think I can do that as I have a large tree that’s close to the center point of the antenna.” I thanked him for his advice, gulped down my last bite of the spicy sausage and headed off to find Mr. Yaesu.

Sure enough in the one covered building there was a modest Yaesu booth with some of the standard gear on a table.

“Hey Tim, welcome. How was that sausage” quizzed Mark.

“I have a feeling I’m going to be reminded of that sausage for the next few hours.” While nodding my head suppressing a belch, I started looking at some of the new Yaesu HTs, mobile rigs and ham shack command center consoles.

“Come with me.” Mark tugged on a black curtain that made up the rear of the booth. I hadn’t paid much attention, but now realized there was a small secret space behind the booth totally surrounded by black curtains.

“Before you can touch or pick up anything, I need you to sign this non-disclosure agreement. We need you to promise you’ll not share anything you see here.” Mark all of a sudden got serious.

“Sure, I’ll sign it.” I scribbled my name and handed Mark the paper.

The next ten minutes went by in a blur. Mark kept his voice down and proceeded to show me prototype ham radios that you’d not believe.

I’m not allowed to tell you exactly what I saw, but I can tell you that comic books come true.

Do you use bluetooth with your smart phone as you drive hands free? Imagine taking VOX to a new level.

Here’s another clue. Apple has Siri.  Imagine if another company had “Arai”.

All I can tell you is ham radio gear is going to WOW you in the upcoming years.

The day ended with ninety-eight percent of the donated gear on our tables in someone else’s car. What little we had left we gave to the vendor next to us to sell or throw away.

NEARfest was a great success. CNHARC netted about $150 for the donated gear after expenses, I had a great time with club members and got to see some secret stuff coming down the radio pipeline.

You couldn’t ask for a better day, no sir you can’t!