Two weeks ago I was in southern California. I was starting day eight of a ten-day vacation with my youngest daughter Kelly. We were going to see as much of Joshua Tree National Park as possible and I was going to try to activate it as part of the National Parks on the Air year-long celebration the American Radio Relay League was sponsoring in conjunction with the National Park System.

Just days before I had activated Yosemite National Park and Death Valley National Park. Basking in the success of those two activations, I was excited about the possibility to set up my Elecraft KX3 and my 29-foot wire antenna that connected to a 9:1 unun somewhere in Joshua Tree. I need a tree to put up my stealth antenna.

I’m used to tall trees where I live in New Hampshire. Many are over 100 feet tall. The trees at Joshua Tree National Park are more like saplings. Most are maybe 15-feet tall at the most. But first and foremost it was more important to me to make sure Kelly got to see everything she wanted to see. This national park was to be the highlight of the entire trip, so I was determined that radio would take a backseat and if I didn’t get the chance to operate, well, there’d be another day perhaps.

This might be the last time ever I’d have a chance to be here with Kelly, and there are always radio waves in the ether to capture. It was an easy decision to make.

We were staying at a rental home just two miles from the west entrance into Joshua Tree. I’ve been to many national parks out west in my life and I have to tell you it was the oddest national park to enter I’ve ever seen.

As you drive up Park Boulevard from the visitor center in downtown Joshua Tree, CA to get to the entrance gate the road changes its name to Quail Springs Road. It’s just a normal residential street with all sorts of houses and driveways feeding off the main road. Then all of a sudden you’re at the park gate. There were normal residential houses within a stone’s throw of the park boundary. Crazy but true! See that red line? That’s the park boundary. See all the houses next to it? Amazing. Image credit: Google Maps (C) 2016

It was to be a perfect day. The weather was to be sunny with a temperature ranging from 70 to 90 F. The temperature difference happens because parts of the park are much higher in elevation than others. The higher you go, the cooler it gets.

A waitress at a local restaurant told us we were here at a good time. In just a month it starts to get uncomfortably hot. She said, “It can be 90F at 6 am and can easily get to 115 F or higher in the park by midday.” That’s deadly heat in my opinion.

After touring the park for about four hours, Kelly and I found a great place to eat lunch in the center of the park on some picnic tables. There was no shade, but we survived. She decided to find some shade in a jumble of tall rocks and suggested I try to get on the air.

The biggest problem at Joshua Tree national park is the trees. As I said before, they’re all about 16 feet tall or less. I need tall trees to get my antenna up in the air. Here is my FAILED attempt at midday to try to activate Joshua Tree National Park. It was a horrible failure. No wonder – look at the wretched antenna. Photo credit: Kelly Carter

There were no decent trees where we were eating lunch so I tried to use a telescoping fiberglass fishing pole I brought to create a sloping antenna. I set it up in a crack in a rock that had a slight overhang creating a small spot of shade.

It was a complete and utter FAILURE. My antenna had to be the most wretched one ever deployed by a radio operator. I couldn’t hear one signal and tried, with no success whatsoever, sending CQ to get one QSO.

Nothing happened except me generating a considerable amount of frustration that I hid from Kelly.

I packed up and we continued to see all the sites we could. The best scenery in the entire park was at Barker Dam. Kelly and I both agreed on that. It’s a medium-sized canyon that has a natural narrow spot in the bedrock that allowed an early cattleman back around 1900 to build a small dam. You can barely make out the dam in the upper left corner of this photo. But you can no doubt see the watermarks on the large rocks! The water gets to be at least 15 feet deep at the dam creating a small lake perhaps one acre in size when this area gets rainfall. Photo credit: Tim Carter

It was close to 5:30 pm when we finally got back to our rental home. We were both tired.

“Dad, why don’t you go back up into the park and try to do your radio thing again?” Kelly knew I wanted to activate the park.

I was tired, dusty and my stomach was starting to remind me that the peanut butter sandwich hours ago was a meager offering to the waistline god.

When we had gotten in the door to the rental, Kelly had asked for my camera to see the photos I had taken during the day. It was on the dining room table where she left it.

In my haste to leave, because I knew I’d eat up at least an hour, I burst through the door without my camera. To add insult to injury, my cell phone battery had been sucked almost dry of power because I had failed to turn it off while in the park.

I could see the red danger level in the battery and plugged it into my car charger for the short trip up the road to try to get some electrons back to where they belong in the battery.

Soon I was to regret not having a camera.

The excitement started to build as I drove to the park entrance. Would I be able to find a tree near the road that might work for an antenna?

I had to drive about two miles or so up into the park before I located a small turnoff on the north side of the road that had a somewhat decent tree that might work.

Within ten minutes I was set up, but mumbling the entire time, “This is a WASTE OF TIME. There’s no way this antenna is going to work.”

The tree was maybe 15 feet tall. It was child’s play getting my halyard line up and over a branch. I knew the best thing to do was to slope it to the east to have any chance of getting out with my meager 10 watts.

I was just about ready to go and fortunately I had one bar of cell service and texted my CW mentor Jim Cluett, W1PID, in NH. I told him I’d be on 14.060 in about a minute.

The last thing I had to plug in was my micro Pico paddles. I did that and in the rush I touched the ‘dah’ paddle generating a tone.

INSTANTLY Jim came back with his call sign. It was so strong it was if he was next to me with his volume up as high as possible.

I was stunned. Magic may happen.

I made 14 QSOs in about 45 minutes with several to New Jersey and one down in Puerto Rico! 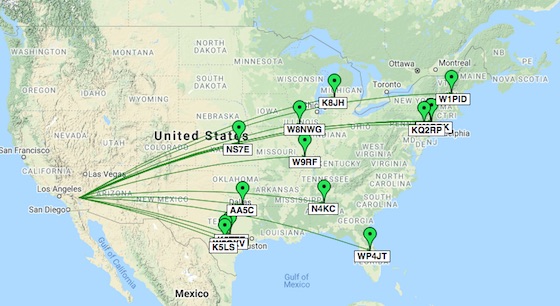 All the while I was constantly checking for scorpions and rattlesnakes as I was sitting on the sand right in the middle of scrub, cactus, and the setting sun.

I decided to take a photo of my setup. Once again I had made a mistake. While on the air, I had left my phone on and it was now completely dead. There was to be no photo of this activation.

However, I was beaming with happiness having activated each of the three national parks. I packed up my gear as fast as possible and got back to the house for a fast shower and some dinner.

Later that night I transferred my hand-written log notes to my tablet where I have HamLog running.

My biggest regret was not being able to get a photograph of the horrible antenna setup.

My biggest takeaway was a sloper antenna, just 14 or so feet off the ground is plenty to pull the elixir out of the ether.

Try it yourself and see.