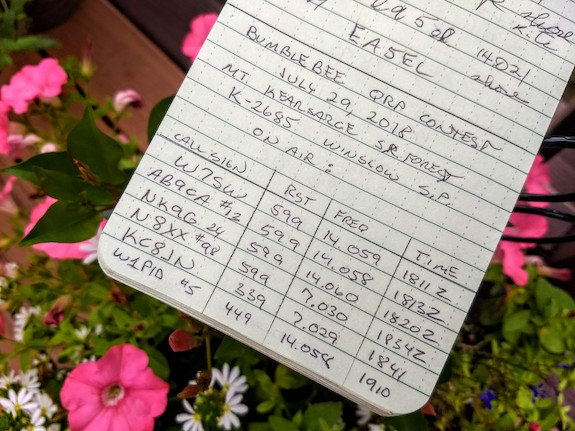 Here’s part of my logbook for the 2018 Bumblebee contest. You need to flip over the page to see the other two contacts. Copyright 2018 Tim Carter

Flight of the Bumblebees 2018 Contest

I was proclaiming this as I stood over Jim Cluett, W1PID. He was sitting in the warm grass on a knoll on the flanks of Mt. Kearsarge. Jim and I were here with our mutual friend Dave Benson, K1SWL. The three of us were bumblebees out in the field trying to gather radio pollen.

We were participating in the annual Flight of the Bumblebees QRP contest hosted by the Adventure Radio Society. Just as bees flit around flower blossoms to gather nectar, we would be spinning the frequency knobs on our radios trying to collect as many contacts with other radio operators as possible.

It’s best if you bump into other bees who are also participating in the contest if you want to get a high score. I tend to be more interested in meeting other people face-to-face when we’re out operating instead of talking with people I can’t see.

I made that bumptious remark to Jim, my outdoor radio and CW mentor, because 90 minutes before I found myself on yet another plateau in my ongoing HF radio quest. I knew Jim would be happy because he’s been patiently pushing me for the past five years to become a respectable HF radio operator.

I love amateur radio but I don’t give it as high a priority in my life as Jim might like. “Just practice 15 minutes a day,” has been his mantra. Sadly I don’t follow that advice each day as some other shiny object seems to garner my attention.

Getting on the Air

When the three of us walked from the parking lot to the picnic area I peeled off first after eyeing a tree that was about 65-feet tall. It was perfect for my 29-foot wire antenna. 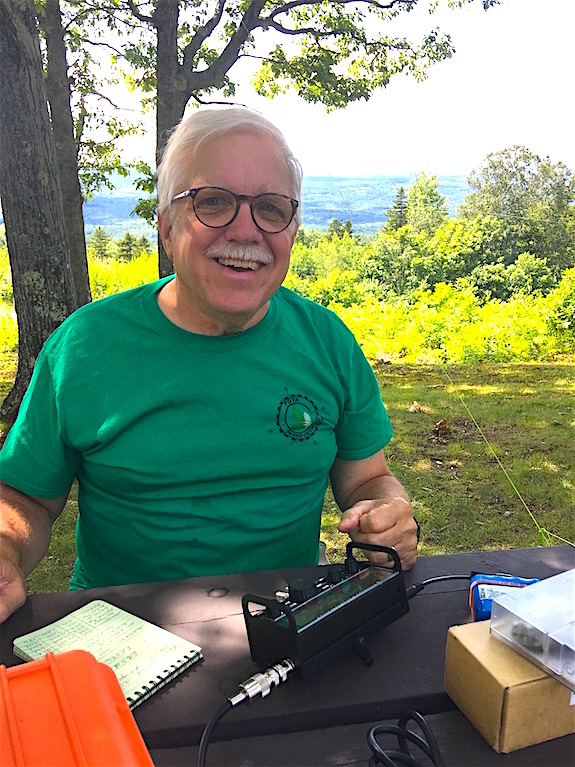 Here I am happy as a clam. I had already made four or five contacts and was thinking about how just two years ago I would have been thrilled with two! Copyright 2018 Jim Cluett

The day before I had decided to get the antenna up as far as possible and connect a 25-foot coax cable to the 9:1 unun that was 15 feet in the air at the base of the 29-foot wire. I wanted the best possible chance for my signal to get out.

Not two minutes had passed and my antenna was up in the tree. Ninety seconds later I was on the air. I glanced over my right shoulder and noticed Jim and Dave were still in a discussion about where each of them was going to operate.

Go back four or five years ago and it would have taken me 15 minutes to get my antenna up into a tree and all my gear set up. Now it only takes me one underhanded throw to get my water bottle and the halyard line 60, or more, feet up and over tree branches. 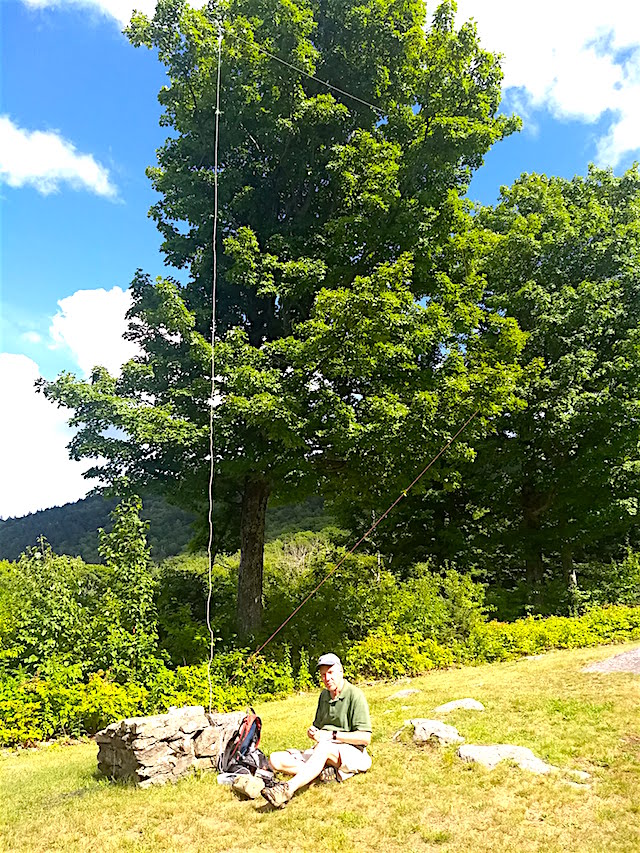 Here’s Jim with his 44-foot twisted pair dipole antenna. It was nice and warm in the sun. Copyright 2018 Tim Carter

I was stunned when I tuned my radio to the QRP (low-power) frequency on 20 meters. There were all sorts of stations calling! This past year propagation has been dismal and there have been times I’ve turned on the radio and heard just one, or two, signals.

Within a few minutes, I had already contacted two other bumblebee operators! After the third contact, I stopped and thought about how just three years ago I would have been thrilled with two contacts for an outing.

Can you Hear Morse Code?

But it gets better. I’m now at a level where I can hear a call sign the first time. Five months ago it would take me two or three times to capture the code and decipher it in my head. While I’m not able to copy at 20 words per minute (WPM), I’m comfortable at 15 WPM.

I feel within six months I’ll be head copying at 15 WPM with no trouble. Three years ago that milestone was not even on my radar. I never thought I could advance that far.

An Ironworker and the Family

About one hour after arriving, two motorcycles rumbled into the parking lot. The two couples made their way to the picnic area and sat at a table across from me. They were extremely curious as to why a wire was stretched up into the tree above me. It’s important to realize they were polite and didn’t bother me.

Jim called me on the radio and I answered him. The contact counted. But the rascal was only 150 feet away from me and gave me a miserable 449 signal report. One of Jim’s favorite pastimes is to yank my chain, some days harder than others.

“What’s the deal with the 449?” I yelled down to Jim who was sitting on the grass. 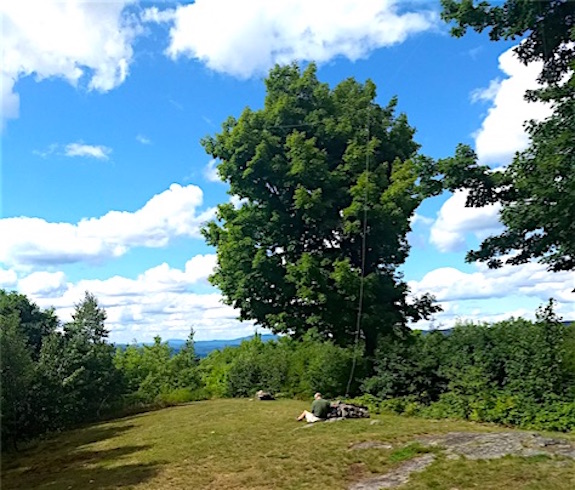 Here’s where Jim was set up. Why he didn’t ask for help to move a picnic table down here is a mystery. He had a stunning view to the north and east. Copyright 2018 Tim Carter

“What’s 449 mean?” said one of the women motorcycle riders. I got up from my table and began a delightful 15-minute conversation.

I discovered her boyfriend was a retired ironworker from Massachusetts. He used to work the high steel and drive spud wrenches into the holes at the end of I-beams so the bolt holes would line up. 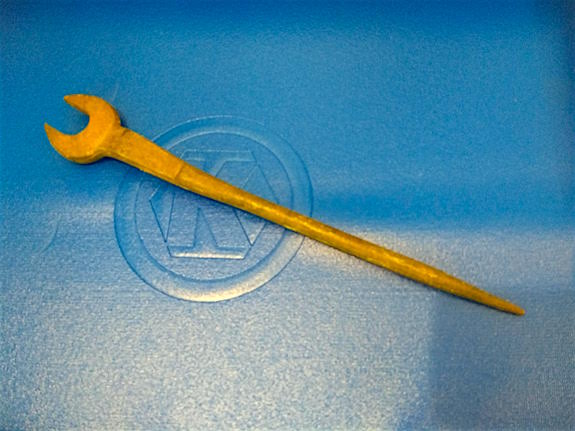 Here’s a spud wrench. Ironworkers have these in assorted sizes. I got this one back in the early 1970s at a construction site across from my home. Copyright 2018 Tim Carter

The other motorcycle couple had just gotten back from a three-week cycle trip through many of the national parks in Colorado, Utah, and Wyoming.

It’s fun talking to strangers. At least for me, it is.

As I walked back from visiting Jim, a middle-aged man was starting a fire in a granite-lined firepit. Moments later his wife walked by my table and said, “Hello! What have you got going on?”

Wires and strings dangling from trees are the best conversation starter I’ve ever discovered. Within minutes I was engaged in a delightful conversation about what I was doing.

It didn’t take me long to discover the husband was a financial advisor and he loved using the Peak Finder app on his smartphone to identify all the mountains we were looking at to the west, north, and east. 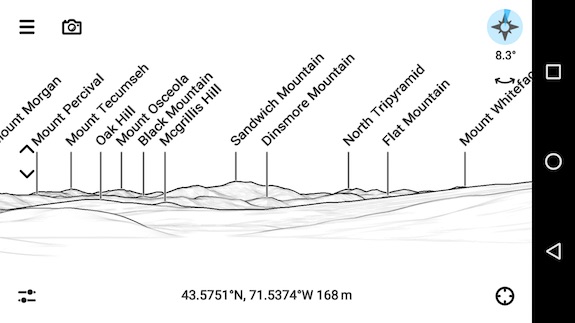 Here’s the profile of the view I have from my deck looking north. This is a very useful app if you like to hike where there are mountains! Copyright 2018 Tim Carter

“There’s Mt. Ascutney in Windsor, VT,” he exclaimed. He then pointed his phone to the north and east and I could see the names and horizon profile of lots of familiar peaks in central New Hampshire. I downloaded that app as soon as I got home. What a neat and useful tool to have on future radio outings!

I looked at my watch and it was time to pack up and leave. As I met up with Jim and Dave near the cars, they both made it quite clear that all the time I wasted talking to the motorcyclists and the family wouldn’t count towards my score.

“You could have had another 15 contacts if you hadn’t talked to all those people,” he added. Dave was backing him up 150 percent.

“Listen, I know you don’t like talking to people, but I do. I discovered all sorts of things about spud wrenches and I know where Mt. Ascutney is.”

“Forget about it. I’m not telling you. Go ask that man if you’re so interested.”

We all laughed and Jim put his arm around me saying, “I still love you.”

He meant it and the feeling is mutual. Each time we all go out I have more and more fun and today was one of my best outings ever.

1 thought on “Flight of the Bumblebees QRP Contest 2018”