On Valentines Day, February 14, 2014, I found myself 3,000 miles away from my sweetheart trying to activate a Summits on the Air (SOTA) peak in southern California.

My goal was to get at least four contacts from the summit of Cerro Negro Benchmark, W6/CT-226. I failed at achieving the minimum required contacts to get the points for the effort and I scored negative points by not having a Valentine’s Day present for my wife back home. 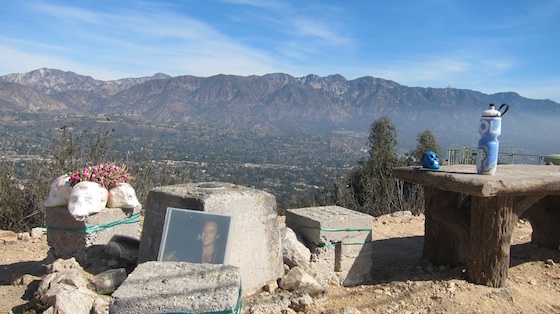 Here’s the summit. It’s a small knob next to a large flat area. The concrete monument holds the actual USGS bronze benchmark. A shrine was also on the summit. More on that in the story. Photo credit: Tim Carter, W3ATB

I hiked to the summit with two of my very good friends, Dan Murray and Steve Loyola. Steve lives just four miles away in Altadena, CA, as the hawk flies, from the Cerro Negro summit.

Dan Murray lives in Boulder, CO and we’re all part of a secret mastermind group intent on, well, I can’t tell you any more.

Because everything is relative, I called this summit a mountain, but native southern Californians call it a bump, or small hill. After all, Cerro Negro is only 575 meters, or 1,886.48 feet, tall. The mountain peaks in the photo above are about 5,000 feet above sea level.

Steve is a technology wizard and had his smartphone EveryTrail application running to track and chart our entire hike. You can see a map, trail statistics, and exactly what we did by visiting the page at the EveryTrail website.

It was a very warm day, with abundant sunshine, when the three of us started up the gravel maintenance road communication workers use when they need to service all the commercial antennas crowding the summit. 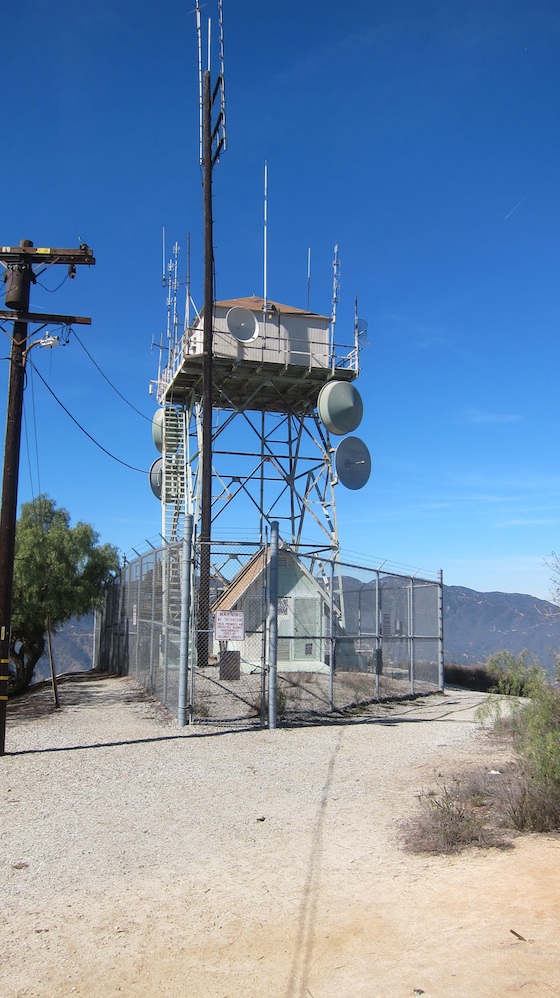 There are lots of antennas up on Cerro Negro blanketing the Pasadena, Glendale and Altadena, CA vicinity. Photo credit: Tim Carter, W3ATB

The day before we climbed to the top of Cerro Negro, I tried to login to my SOTA account to announce I was going to be there. For some reason, it would not accept my password.

When you publish your intentions to climb a SOTA peak in order to activate it via the SOTA website, the website publishes your itinerary to other ham radio operators. The ham operator climbing the peak is called an activator.

Back on the ground, the other hams who want to talk with the activator are called chasers. They can be in their houses, cars, outdoors in their backyard, or even on other SOTA summits waiting for you to get on the air.

SOTA awards the activator, the person climbing the SOTA peak, and the chasers points if they make a valid communication or contact with each other. It’s a fun way to blend hiking with ham radio.

Active SOTA chasers can amass many points in a day as they sit in their shacks in their skivvies while the activators have to often invest hours to get one or more points climbing, setting up their radios, and descending from a peak. Each SOTA summit has a point value based on all sorts of factors including the height and difficulty of scaling the peak.

I brought two radios with me as I wanted to try long-distance HF using Morse code and then use a small handheld radio on the local 2-meter frequency.  My HB-1B four-band transceiver was perfect for the job as it’s a compact radio made for hiking and outdoor radio.

The multi-band thin wire end-fed antenna allows me to make contacts using Morse code on the 20 and 40-meter bands.

To work other operators in the southern California Los Angeles basin on 2 meters, I also had packed my Baofeng UV-5R. With all of this equipment, I was confident I’d be able to gather the four needed contacts to activate the peak to get my two points. But without having my intentions published on the SOTA website, it was a crapshoot.

It didn’t work. I was able to hear plenty of Morse code conversations on 20 meters, but when I transmitted my 1.5 watts of power couldn’t be heard or other operators decided not to come back at the slower CW speed I’m using at the current time.

I then jumped on 2 meters with my small handheld radio but was only able to get one contact. The operator who came back was in the midst of an ARRL 100th anniversary contest trying to get as many contacts as he could.

He was kind enough to let me take over the national calling frequency, 146.520 Mhz, to see if I could get my other three contacts. I was not successful and yielded the frequency back to him.

On the summit, there was a nice sitting bench. Next to the bench was a poured concrete pedestal that held the official USGS bronze benchmark. Someone had built a shrine with four white plastic skulls, a smaller painted blue skull, color photographs, a tiny elephant, a piece of pottery, and a metal cap to a beer bottle. 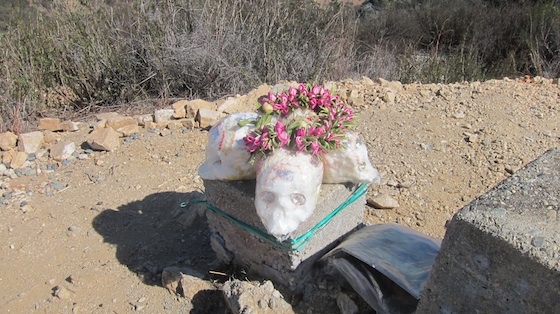 This is the shrine that was erected in the honor of some man who was in the photos we found. Cerro Negro must have been a special place for him. RIP. Photo credit: Tim Carter, W3ATB

I still had a great time with Dan and Steve. I got back to Steve’s house, and waiting for me in my email inbox from SOTA were instructions on resetting my password. I did that and now am ready to try again!