I could barely hear Dave Megin, the CNHARC club president, over the pounding raindrops pelting my Ford Super Duty F-250 truck and the windshield wipers swishing back and forth at their highest speed.

It was 6:15 a.m. Saturday May 17, 2014 and I was straining to see through the sheets of pouring rain as I was driving towards the Tradeport in Portsmouth, NH. In less than an hour courageous bicyclists would be starting to ride in this foul weather towards Ongunquit, Maine. While the cyclists could choose from three routes (25, 40 or 55 miles), those deciding to take the longest route would experience hours of torture if these conditions continued through the morning.

“Good. I thought I was going to be the only one providing communications for this race and radios really work best with at least two people.”

Breathe NH is a non-profit organization that uses the annual two-day bike ride to raise money. Riders have a choice of three different courses depending upon their fitness and endurance.

Most riders who participate, no matter which route they take to Ongunquit, ME, accomplish this feat in about six hours. Lunch, massages, a heated pool and giant hot tub await them at the Meadowmere Resort.

The cyclists, Breathe NH staff and support crew, volunteers and us ham radio operators take over an entire wing of the spacious resort just one-half mile from the heart of Ongunquit. The following morning they would bike back to Portsmouth, NH on their choice of two routes, one 35 miles and the longer one 52 miles.

The rain began to get worse as I pulled into the parking lot. I didn’t see many other cars, trucks or bike riders. The weather brought out those who undoubtedly have the three D’s:

I wandered inside the Registration area. There were far more volunteers there than bicyclists. That’s not a good thing. Up ahead I saw Dave and wandered towards him.

“Who else is working the event,” I asked.

“Besides you and me, Mary Sheldon – N1RKO, Cliff Dickinson – N1RCQ, Bob Murphy – N1RWH, Steve Davidson – K1SMD, and Peg Brown – KB1GQV are supposed to be here.”

That seems like a lot of ham operators but in reality it was a razor-thin crew. The cyclists get spread out during the event and we need to have ham radio operators at the front, middle and behind the last riders to make sure they all get to the finish line safely.

What’s more, there were two courses that needed safety coverage by our crew. This would stretch our communication resources to the limit. It would have been much better to have at least ten 50-watt radios shadowing the cyclists, but that was not to happen on this weekend.

To add to the complexity, we work this event primarily on simplex frequencies. This means it’s common for messages to be relayed to and from the ham operators who are not only mobile, but are also often 20 or 30 miles apart. While that may be a walk in the park on the flat plains of Montana or Kansas, it can be a challenge on the hilly and rocky coastline of Maine.

This was my second time working this fascinating public service event. Two years before it had been a picture-perfect warm spring day. This year, it was gloomy, rainy and depressing. 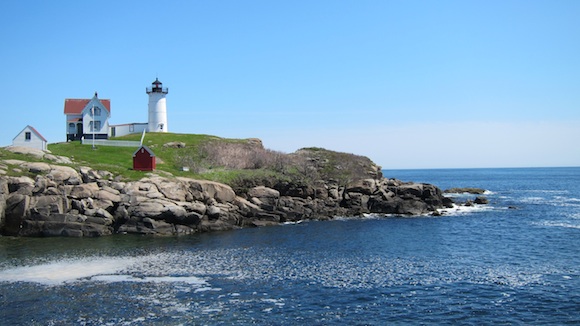 This is the famous Nubble Lighthouse in Maine. You’re 2/3rds of the way to Ongunquit, ME from Portsmouth, NH when you stop here for water. This photo was taken in May, 2012. In 2014, the fog was so thick you could barely see the lighthouse from shore. Photo credit: Tim Carter – W3ATB

The forecast, however, was encouraging. The relentless heavy rain was to end by mid morning and the front producing the precipitation might push all the clouds off the coast by afternoon. As Kenny Chesney said in his hit song, “Only time will tell, but it ain’t talkin.”

The start of the race was delayed about fifteen minutes because the heavens opened up with a drenching downpour. Dave had me head out to get ahead of the pack of the serious riders. He wanted me to drive out to the first rest stop at Greenland Central School in Greenland, NH.

A new feature this year were assigned navigators. Lindsay, a 25-year-old graduate student in museum curation, was to be my north star on this day. We raced to my truck trying to avoid the raindrops drilling into us, but both of us got soaked in the process.

It didn’t take long to get to the school where rain was keeping the water and snack volunteer inside her van trying to stay dry. She had wisely placed cases of bottled water on the legs of the collapsible canopy keeping it from blowing away.

I’m in my truck at Greenland Central School looking out at Mary’s, N1RKO – truck. You simply didn’t want to be standing outside unless it was necessary. Photo credit: Tim Carter – W3ATB

Lindsay and I exchanged the customary “Who-I-am-and-what-I-do” conversation as we awaited the first riders and our relief, Mary – N1RKO. Ten minutes later, Mary showed up pulling alongside us in her green Ford Ranger pickup truck. Mary’s a seasoned ham operator and has worked this event for years. She loves the outdoors and volunteers to work many public service events. 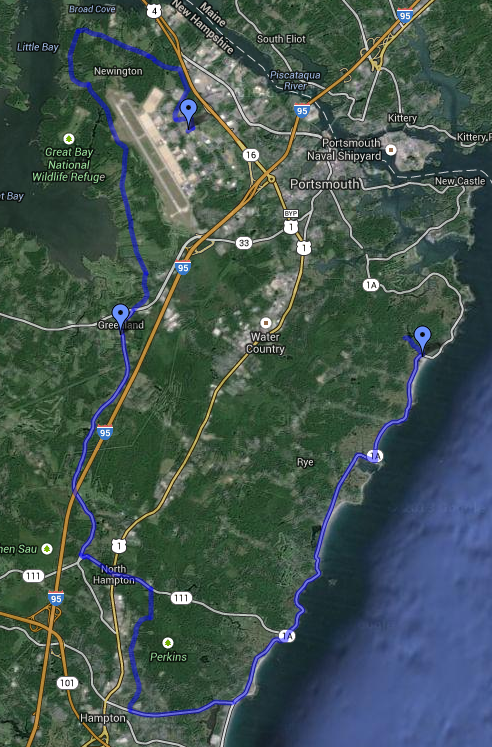 Here is the first part of the 55-mile route from Portsmouth, NH to Ogunquit, ME. Image credit: Google Maps

Once Mary arrived, Dave had me follow the lead riders as they clawed their way through the rain and wind on the circuitous route towards the coastline.

Lindsay and I made it to Wallace Sands State Beach just south of Portsmouth, NH. We were on the lookout for warm coffee and a place to make a nature stop. The rain had turned to a drizzle, but it was cool, and the ocean was a steel gray. The cloud ceiling had to be less than 200 feet.

We discovered a general store in Rye, NH that was open and deserted. There we made the exchange of liquids and got back in my beast heading north up the coast. The rain had stopped, for now.

If you work a public service event like this, the outcome all desire is no serious problems. As it would turn out, we achieved that goal. The only injuries suffered were several flat tires over the course of both days. That’s a very good thing.

Our next stop was Ft. McClary. You don’t have to be a military expert to understand why the fort was built at this location. Ships trying to approach Portsmouth harbor were staring directly into cannons that could pick off the ships like fresh steaming lobster off a plate. 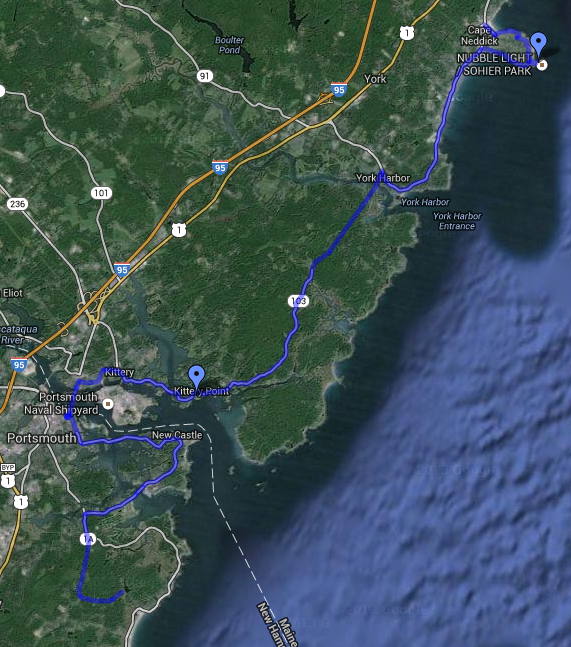 Here’s the second leg of the 55-mile bike trip from Portsmouth, NH to Ogunquit, ME. Image credit: Google Maps

We stayed at Ft. McClary for about 20 minutes waiting for Mary to relieve us once more so we could leap frog up to the historic Nubble Lighthouse at York Beach, ME.

When we arrived at the Nubble Lighthouse, the weather looked grim. The fog was thick and you looked out to sea into a ghostly gray sheet of nothingness. If I were on a ship moving at 20 knots in that soup, I’d for sure be working on a mild anxiety attack wondering if my radar and GPS were really working. Imagine how sailors of old must have felt without the technology we enjoy.

After Nubble, we started to sprint towards the finish line. 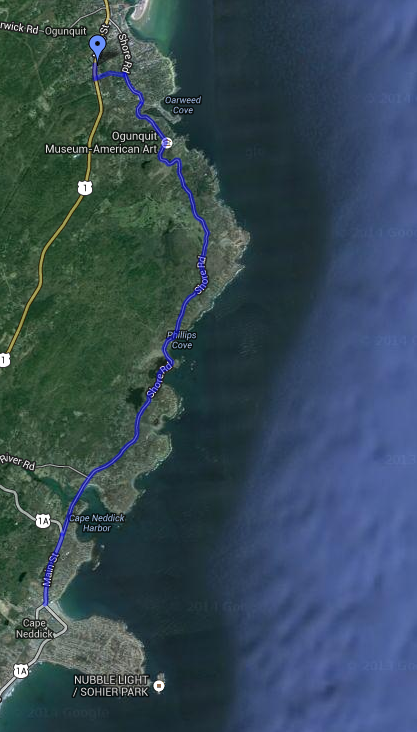 This is the final stretch of the 2014 Breathe NH 55-mile long course from Portsmouth, NH to Ogunquit, ME. Image credit: Google Maps

“Lindsay, look. I can see blue sky!” I was looking out my driver’s side window and sure enough there was a patch of glorious blue. Mother Nature had decided to move on and punish our allies to the northeast in the Maritime Provinces of Canada.

Just after 12:30 p.m. Lindsay and I pulled into the parking lot at the expansive Meadowmere Resort on the main drag at Ogunquit, ME. I’d guess that 15 cyclists had already made it to the finish line. They were getting rehydrated and some were getting ready for the complimentary massages to work out any cramps that were lurking in their legs.

After eating lunch, Dave released me from duty and I headed down to Ogunquit Beach to do Morse code with anyone that might hear me on my low-powered HB-1B radio. By then the skies had cleared and it had turned into a gorgeous warm afternoon. 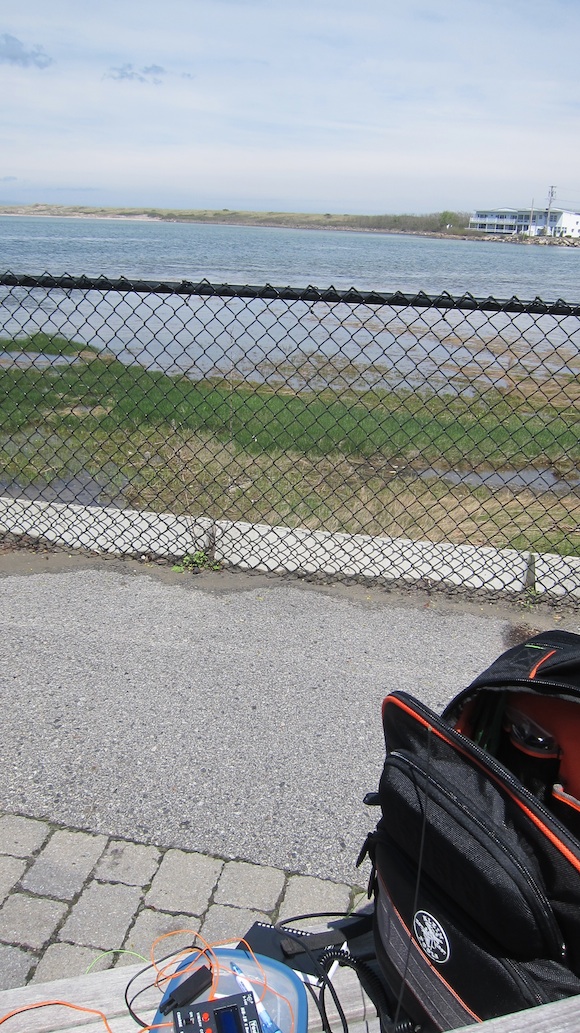 It still looks a bit overcast, but those were clouds hanging out over the ocean. Overhead on the land, it was blue sky and sunshine. Photo credit: Tim Carter – W3ATB

This is one reason I love volunteering for this event. You get the afternoon off to enjoy the ocean before it gets clogged with the summer tourists. But realize it’s important to get back to Meadowmere by 5 p.m. to enjoy dinner with the cyclists and all others who participated.

I thought dinner was at 6 p.m. and wondered where everyone was when I got back to the motel from my afternoon of invisible radio waves and conversations about my strange green kite string (halyard for my antenna) that seemed to be snagged in a tree. It was about 5:10 p.m. when I arrived and it was a ghost town in the parking lot. 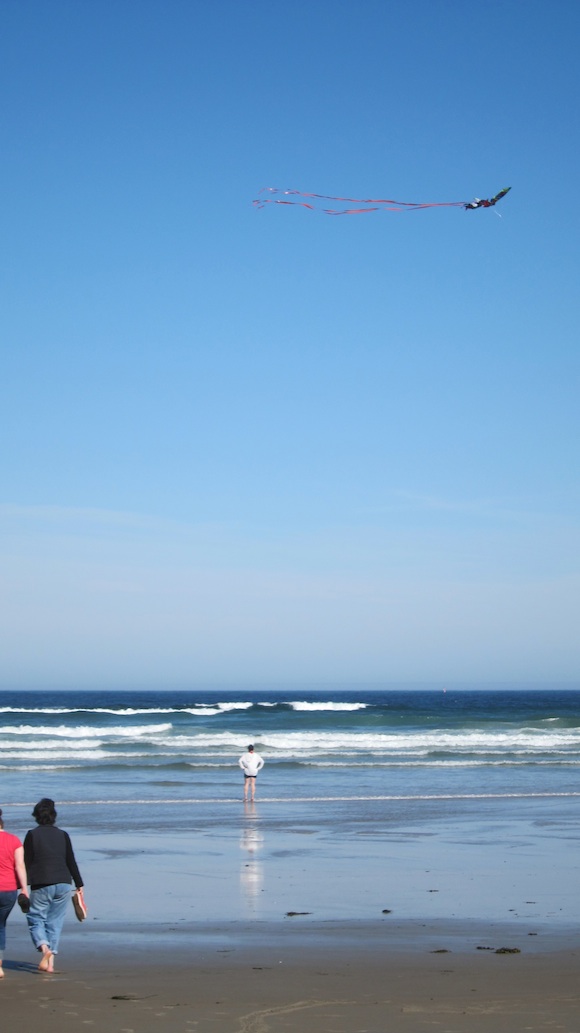 This is late day as the tide was almost out at Ogunquit Beach. The stiff wind had no problem supporting this kite! Photo credit: Tim Carter – W3ATB

The next day was uneventful as I had the glorious job of working sweep on the long course headed back to Portsmouth. The advantage of sweep is that you get to creep along behind the last rider.

This allows you to really see what’s on either side of the road. Typically you zoom past all the houses, horses and hayfields at 40 or 50 mph. Among other things I saw a tiny cemetery right up against the road. 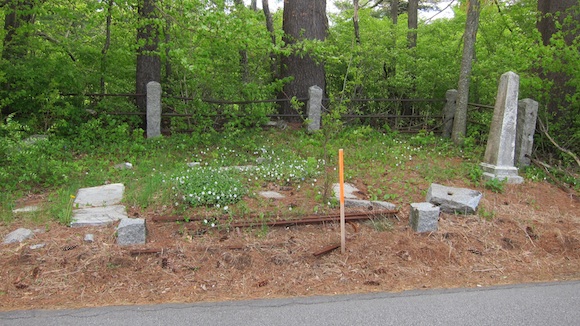 Here’s a very small cemetery just feet from the edge of the country road. Stout granite posts have been cracked off by cars or snowplows. Photo credit: Tim Carter – W3ATB

Once back in Portsmouth at the Tradeport finish line, a delicious picnic lunch with grilled hamburgers awaited us. We sat in the sun and regaled in another safe CNHARC public safety event. If you’ve ever wanted to see the NH and southern ME coastline, this is the way to do it. Volunteer next year and see what I mean!