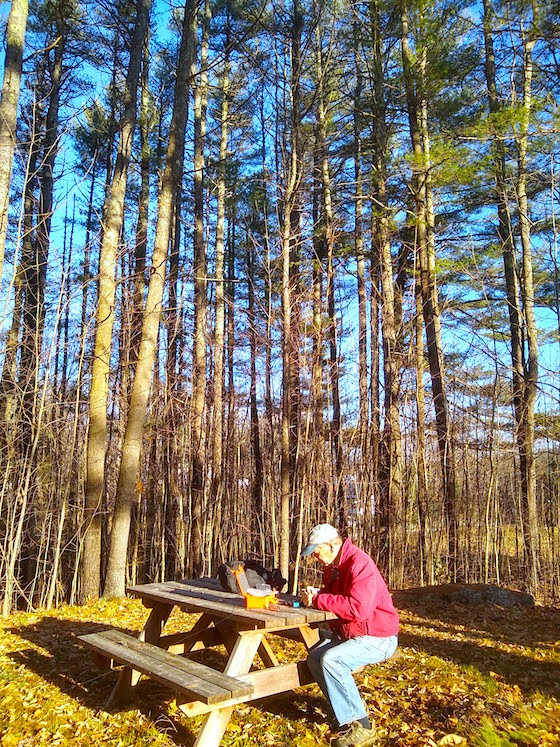 Here’s Jim Cluett, W1PID, after he’s set up his small emergency kit. He’s listening with a small set of earphones as the LNR radio has no speaker.

“Listen, I’ve got this small Pelican 1120 case with an LNR Mountain Topper rig in it. I have everything in the case to make a fast emergency contact. Let’s test it today.”

This plan was hatched early in the morning as part of the secret message CW training Jim does for me to help improve my Morse code copy speed. Today was to be a wonderful sunny day as opposed to the gray cold rainy day yesterday. November in New Hampshire can be sullen so when the sun’s out, you take advantage of it. 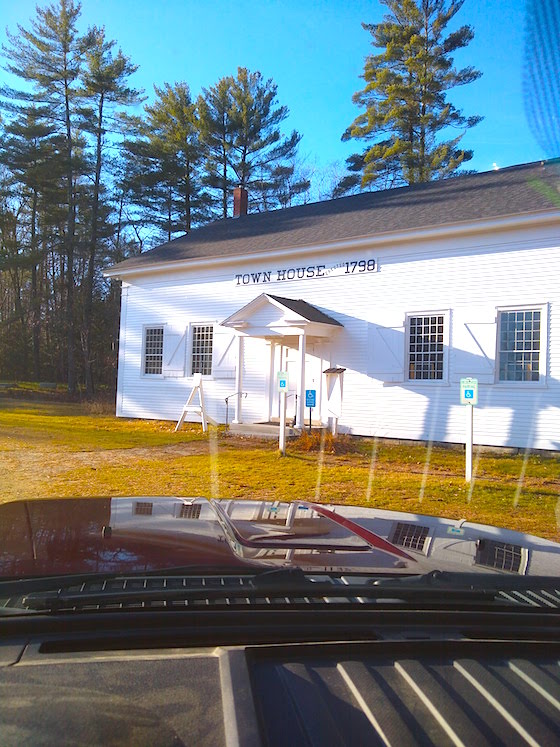 We decided to operate at picnic tables at the New Hampton Meeting House. They were in the sun and rarely do we see people here. That means we can operate in relative peace. It’s an old building, erected in 1798, as you can tell!

“It looks like I’ll get there before you by a few minutes. I’ll scout out a picnic table in the sun.” I mentioned this to Jim as we communicated on VHF 147.540. We routinely talk on simplex VHF on our mobile radios as we drive to meet each other on our adventures.

We arrived at the New Hampton Meeting House precisely at 2 pm. The sun was shining brightly but it was low in the sky. The temperature kissed up against 42 F and fortunately there was no wind to slice through our lighter-weight clothing. It was a blue-bird gorgeous November day. 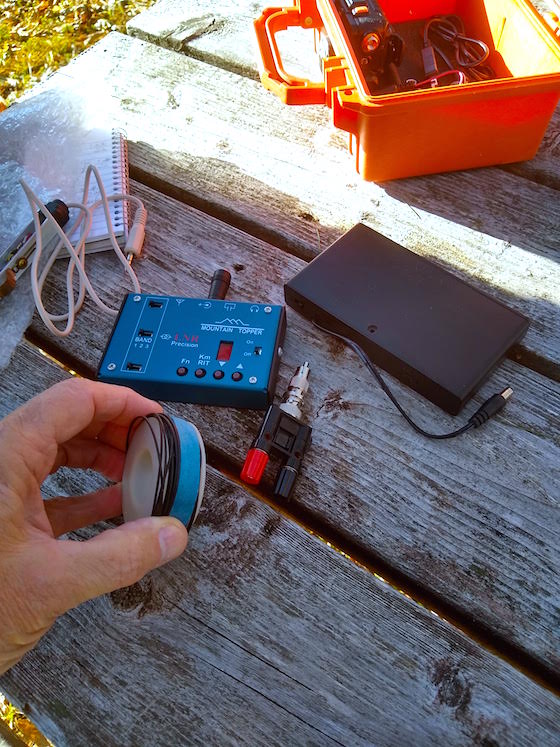 Here’s the 40-meter resonant antenna Jim decided to use with his tiny LNR Mountain Topper radio. There were two pieces of 26-gauge wire on this spool, each 33 feet long. The wires would connect to a banana plug adapter which attaches directly to the tiny radio.

Jim had his emergency kit unpacked in seconds.

“Boy, it sure is easy to unravel the antenna wires with two people!” Jim obviously has had trouble in the past deploying this thin wire by himself. This very thin wire which can get intertwined faster than you can open a prize from your best friend!

While he connected the ends of the thin wire to his banana plug adapter, I suspended the two strands of wire in a straight line just about four feet off the ground in the limbs of nearby bushes and scrub trees.

It only took us about five minutes to set up.

“Already the experiment failed.” Jim pronounced with a tone of disgust. His small home-brewed iambic paddle was malfunctioning. A very important part of this emergency test was that everything needed to work so you could get help or transmit a message for someone needing help.

“That’s what happens when you don’t test your equipment before going out.” I don’t have a strong sense of empathy when it comes to my buddy Jim because he’s quick at the draw to point out my shortcomings. A crisp example is the day he swore I was sending Morse in reverse. But I digress.

I opened my backpack and pulled out my coveted micro Pico iambic paddles so Jim could continue on with his experiment. He was quite appreciative. 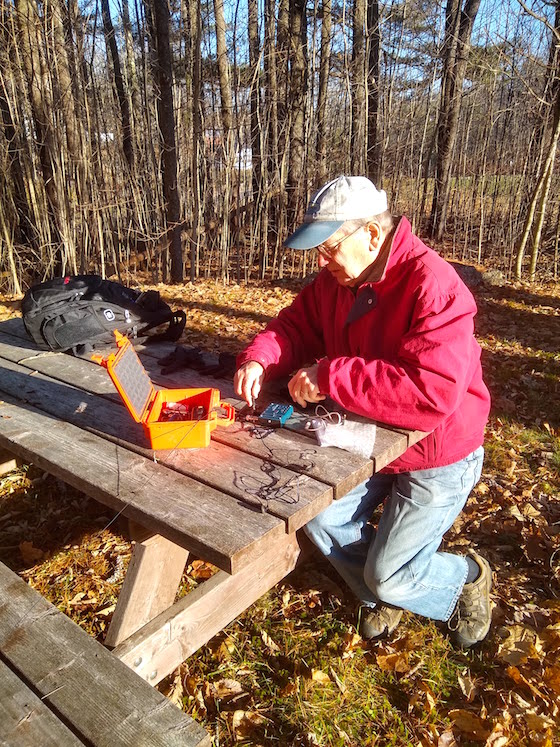 Here’s Jim impatiently waiting for other operators to end their extended conversations.

The goals of the experiment were:

Jim hunted for other operators and found four, but they were all in long extended conversations we hams call rag chews.

Then Jim found an operator who must have had his radio set up to send CQ automatically not allowing another operator to answer him easily.

“He wants to call CQ for twenty minutes!” Jim was exasperated. He wanted a fast contact!

It’s important to realize this exercise was to do a simulated emergency as if you were out in the wilderness and someone needed help right away. In that situation, you don’t want to be lollygagging around chit-chatting with your soulmate about what movie you’re going to watch on Netflix tonight.

Jim has an overabundance of positive qualities too many to name but patience is not one of them. 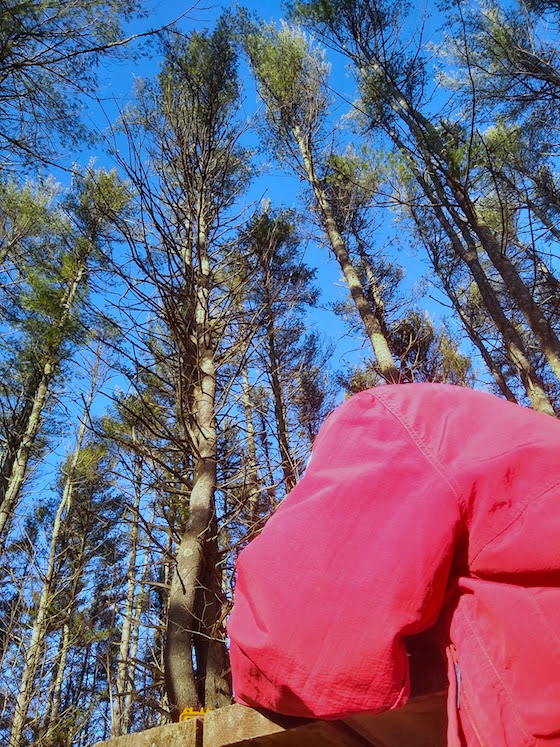 We were set up surrounded by evergreen trees that exceeded 110 feet tall. That’s pretty normal for trees in New Hampshire. They’re spectacular.

Jim was locating strong signals but each one was an operator engaged in a long conversation.

“The guys are having Thanksgiving dinner here!” I couldn’t help but laugh at Jim’s quandary of locating some operator not engaged in an extended rag chew who would just call CQ and allow Jim to answer back. CQ is the universal acronym in Morse code operators send inviting any listening station to answer back. Sometimes the CQ is sent with another acronym to filter out some operators.

After about fifteen, maybe twenty minutes, Jim finally made contact with K8AI in Michigan. It’s important to realize the radio Jim was using transmits a very low-powered signal and we had an antenna just four feet off the ground. It was remarkable that it worked if you have a grasp of antenna theory!

I had decided to take advantage of the glorious day and quickly set up my Elecraft KX2. I got out my trusty water bottle and had my 29-foot vertical-wire antenna up in less than two minutes. I connect this wire to a 9:1 unun. This lowers the impedance in the wire antenna to a respectable amount so the internal tuner in my KX3 can maximize my output signal.

The first throw of my water bottle launched my halyard over a dead branch about 50 feet in the air.

It didn’t take me but a few minutes to locate a tasty long-distance contact in the Caribbean, FM5KC. It was the Ducos Radio Club on the tiny island of Martinique. I was on 20 meters and used skills taught to me by Jim to quickly get the Ducos operator to hear me before hearing some other more-powerful station.

To think one can do this with a radio that sips power from a small 3 Ah BioEnnoPower LFP battery and transmits out a signal using just five watts of energy still astounds me. 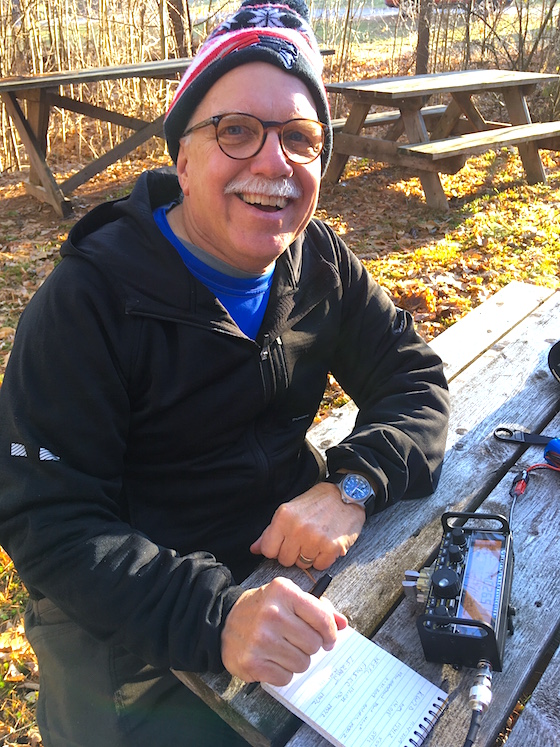 Here I am happy as a clam after making two DX contacts in less than ten minutes in not-so-favorable conditions! Outdoor radio can be very challenging. No, I’m not bald, but I do have a growing bald spot on the back of my noggin!

After entering the data in my logbook I went hunting for another contact. Within minutes I had a fast exchange with ZF2MJ, another Caribbean station. It was Dan who was either vacationing in the Cayman Islands, or he might have a winter residence there as he possesses a Cayman Islands callsign.

We decided to pack up after I logged Dan. We had been at the Meeting House for nearly an hour and a cup of hot coffee sounded great.

Jim decided to help assemble my gear and focused on getting the wire antenna out of the tree.

“You wind the string onto the reel first, don’t you?”

Always the quintessential jokester Jim tries at every chance to get a rise out me. He knows to wind the wire on first and if you ever see him, ask him about the time he decided to load my shorter 17-foot counterpoise wire onto my Trident finger reel instead of my antenna!

It was a wonderful afternoon and believe me the days like this left in the year might be able to be counted on one hand. Soon the cover snow will happen and you won’t see the carpet of leaves or grass until April.