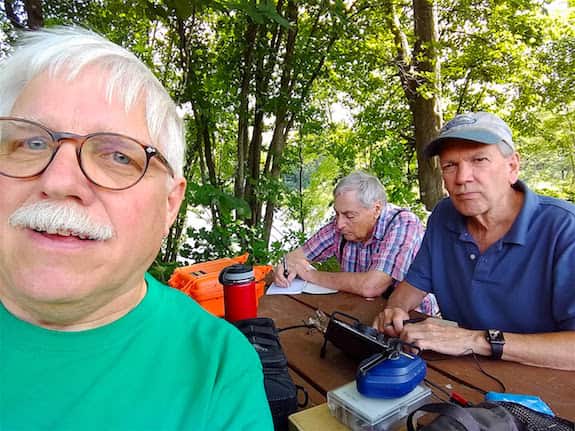 That’s me in the green t-shirt. N1LT, Dick Christopher, is in the plaid shirt and W1PID, Jim Cluett, is in the blue polo shirt. Dick forced me to upgrade to General six years ago and Jim has been patiently teaching me outdoor radio and CW. What a thrill to be out with both of these QRP radio giants. Copyright 2018 Tim Carter

The 2018 NJQRP Skeeter Hunt radio contest was a huge success here in central New Hampshire. It was one of the best times I’ve had outdoors in a few years because I was able to operate with the two men, Dick Christopher and Jim Cluett, who have offered me the most amateur radio guidance in the past seven years. 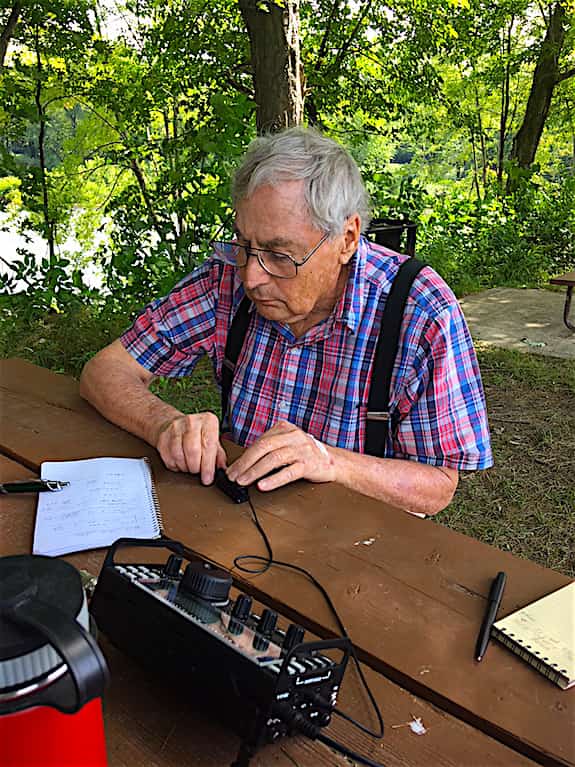 Dick Christopher, N1LT. He was the founder of the Central New Hampshire Amateur Radio Club. He made me an offer I couldn’t refuse to upgrade to my General privileges. I only had a little less than three weeks to prepare. Copyright 2018 Jim Cluett

In a meager attempt to pay them back for all they’ve given me, I decided they could sit on the picnic table bench while I set up all the equipment. They howled with laughter when the first under-handed throw of my water bottle soared so high I was unable to grab the end of the halyard cord. It literally slipped through my fingers only to dangle 15 feet up in the air out of my reach.

I had to climb down over the river bank to retrieve my water bottle and pull the halyard cord through the tree to start over.

I tied the end of the cord to a special clip on my backpack and threw again. The second throw was perfect as the water bottle came straight down through the branches just ten feet from the edge of the picnic table.

In all the confusion I slipped the BNC cable onto my Elecaft KX3, but failed to twist it to lock the cable onto the female connector. Even still we worked contacts like I used to make cheese coneys at Skyline Chili all those years ago.

What was the Weather Like for the NJ Skeeter Hunt?

The weather was perfect. The temperature was probably 76 F, it was brilliant sunshine and the all-important dew point was about 57 F. The bonus was there were no bugs bothering us until the last ten minutes. That’s when a swarm of biting flies discovered my legs!

Where Did You Operate?

The three of us were just 50 feet from the edge of the Pemigewasset River in Bristol, NH. We were in the US Corps of Engineers flood control area behind the Franklin Falls Dam. There’s a group of three picnic tables under a majestic pine tree that offered up her branches to support my 29-foot wire antenna that had a 9:1 unun at the bottom. 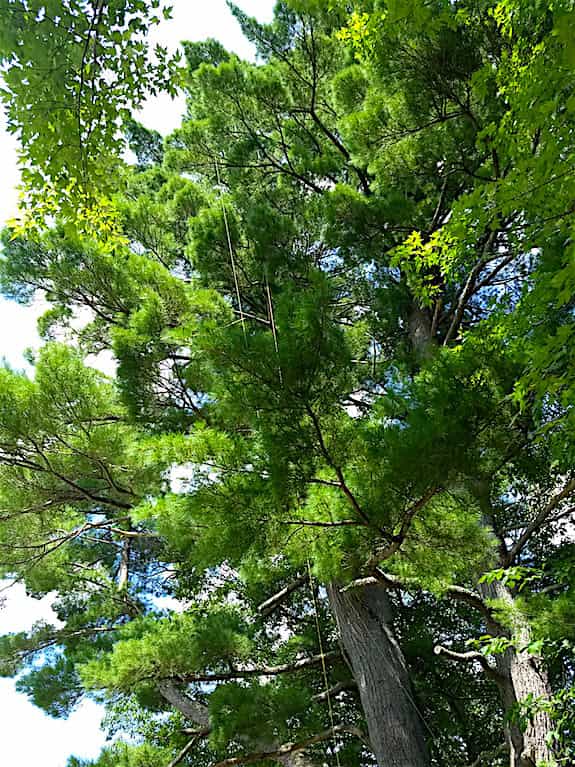 This is my wire antenna and halyard holding it up. The top of the antenna was 39 feet up in the tree.  The halyard line continues up another 20 feet before it starts to come down. The wire did not touch any branches or pine needles. That’s super important! Copyright 2018 Tim Carter

Did you Operate as a Team or as Individuals?

We decided that we’d operate as individuals but use the same radio, antenna and iambic micro Pico paddles. We each had our own log books and used my Elecraft KX3, my 4.5 Ah BioennoPower LiFePh battery, and my 9:1 unun attached to 25-feet of coax cable. 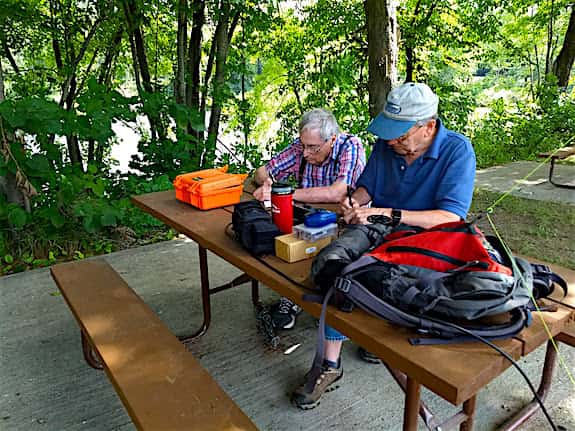 Jim and Dick look like they’re attending class taking notes. As you might suspect, they’re busy copying CW being sent by another Skeeter! I sat at Jim’s left when I wasn’t taking photos or looking at horses. Copyright 2018 Tim Carter

How Many Contacts Did You Get in the 2018 NJ Skeeter Hunt?

We had a grand total of only fourteen contacts, but it was far more than I ever thought we’d get. Propagation has been horrible this summer. I would have been thrilled with three contacts today.

Because we each worked the same contacts, we were slower at capturing other contacts had we been able to hunt and pounce by ourselves. Jim would work a contact first, I’d follow and then hand the paddles to Dick.

It was a great way to operate. Had we set up individually, our signals would be crashing into one another and it would have been a frustrating ball of mayhem. Trust me, I’ve been in this situation before with Jim and another friend K1SWL. It’s no fun to be trying to work others when a nearby signal walks over a QSO.

Who Else Was With You Next to the River?

Why I’m glad you asked! Women and horses joined us. Lots of both.

It turns out there’s a cool group of NH women who ride together and they come to this amazing flood control area to exercise their steeds along the banks of the Pemigewasset River. 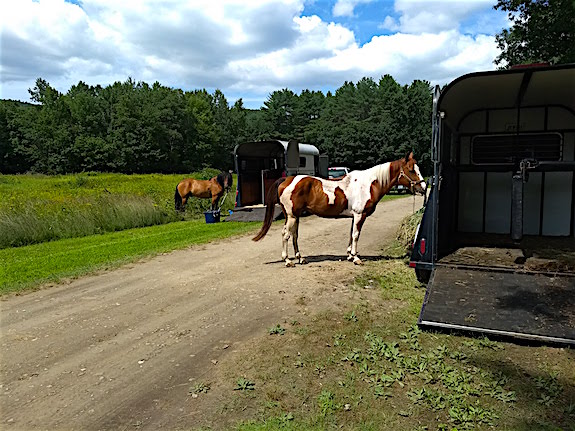 There were at least ten horses. They were pretty frisky and loving the fresh grass near the picnic tables. Copyright 2018 Tim Carter

Several were amazed we were doing Morse code. But all were flabbergasted about how I was able to get my halyard up 65 feet into the tree with just my arm.

My answer always when asked this question is, “Oh, it’s just one of my skills and magic.”

I had a blast because I was with two of the hams that have played such an important part of my journey in this hobby. The weather was a bonus as were the horses!