Yesterday before sunrise I was one of the few people at blustery and chilly Presque Isle State Park in Erie, PA. The lake water crashing on the beach was screaming that winter is coming. 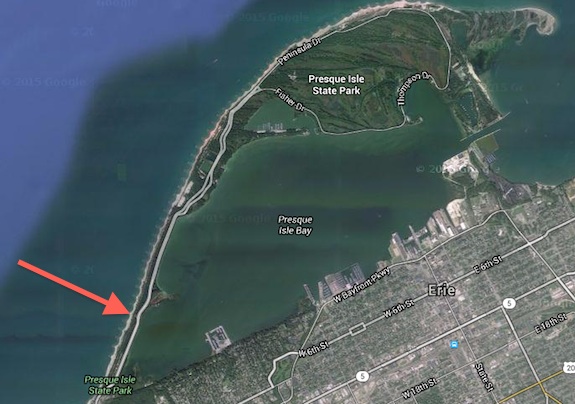 The red arrow points to where I parked my car along a narrow road that parallels the beach. Image credit: Google Maps

My wife Kathy and I had stopped in Erie to break up the fifteen-hour drive between our home in central New Hampshire and Cincinnati, OH. We were on our way to see family in Ohio.

I’m an early riser and Kathy’s a night owl like her dad. That gives me about three hours each morning to explore or conjure up an adventure. Today I was determined to operate from the shoreline of one of our Great Lakes here in the USA.

The temperature was 36 F, it was mostly cloudy and I estimate a stiff 15 mph wind was coming out of the northwest along the water. I arrived about fifteen minutes before the sun peaked over the horizon. 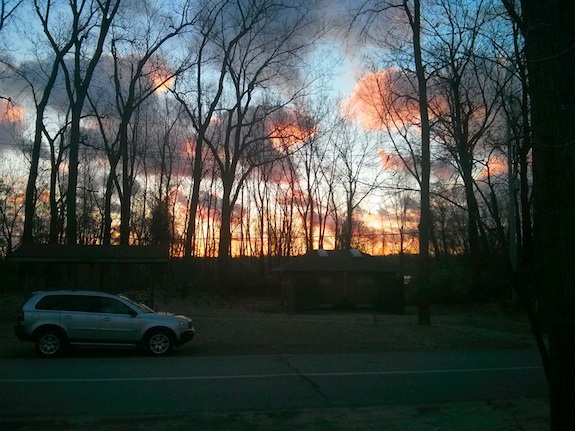 In warmer weather you could easily use the trees on the other side of the road and sit at a picnic table next to the water. How lucky the hams are who live here in Erie, PA!. Photo credit: Tim Carter – W3ATB

Because of the cold, I decided to operate inside my car so I’d be more comfortable. There were plenty of tall trees right next to the road that would kindly accept my green micro cord I use as a halyard to pull up my par EndFedz 10, 20 and 40-meter antenna.

I brought with me a fine flat stone from NH to use as a weight to get my micro cord up about 30 feet, or more, into a tree. My first throw was perfect and the stone dropped straight down so I could easily retrieve it.

Within a few moments, I had deployed my antenna and I attached my 25-foot piece of RG-174 coax cable that extended from the antenna matchbox to the inside of the car. I had tied the one end of the halyard to a 6×6 support post to an adjacent picnic shelter. 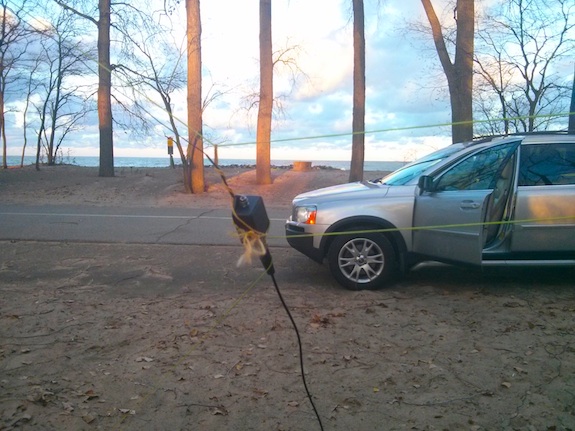 You can see the magical matchbox at the end of the Par EndFedz multi-band antenna. Photo credit: Tim Carter – W3ATB

It only took a few moments in the car to get on the air.

I figured my QRP outdoor radio mentor, Jim Cluett – W1PID, would be up and moving about so I texted him saying I was on the air.

He texted back suggesting we go to the upper part of 40 meters because the massive Sweepstakes ARRL contest was in full swing. 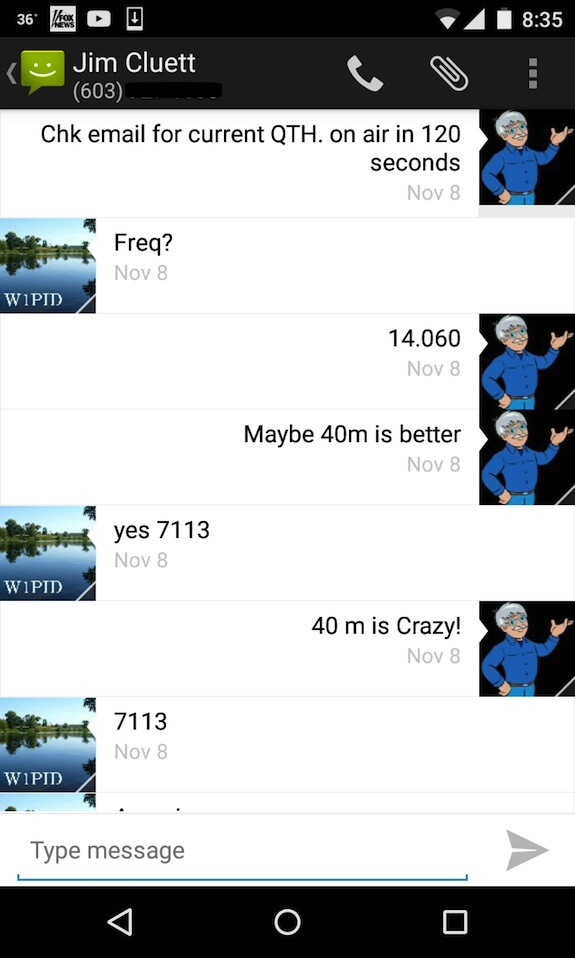 I had no trouble doing a fast QSO with Jim and his signal was booming into me. He gave me an honest report, that’s all I ever want, of 569. Of course he got the 599 he deserved.

Even though we did an official QSO, I never feel good about working Jim under these conditions. What I mean is I had to text him to get him to be where I was.

Sure, the band conditions were favorable and we did a QSO, but I feel the real ones are the ones you get when you stumble across, bump into or pounce upon that invisible person you can’t see.

I decided to descend into the wild jungle.

Off I went to the mid part of 20 meters and it was a cacophony of code.

This is where my radio was and you can see me in the jungle. Photo credit: Tim Carter – W3ATB

I started fine tuning my HB-1B and found W1SJ calling CQ. He was so strong I had to turn my volume way down.

I’m not a contester. I did happen to work one a week before – the Zombie Shuffle – but it’s a fun, low-intensity contest. This day you’d find the animals roaming the bands eating small grasshoppers like me much like a small oyster cracker that disappears down one’s throat.

I was in a pileup but believe it or not he heard my weak 4-watt signal and came back. I thought I heard a RST of 599, but I didn’t. I estimate his sending speed at probably 25 WPM.

I had no idea what he sent as my listening speed at this time is half that on my best day.

Little did I know that RST was not part of the official exchange for this contest. What an idiot I was to wander into the jungle without knowing the rules.

I sent back his RST of 599, PA and the number “1” as he was officially my first contact in the contest.

Because I didn’t take the time to discover the rules of the contest, I was unaware I wasn’t providing the correct information for the contest exchange.

No doubt he was shaking his head tempted to send back LID. Hells bells, he probably did send back LID and I didn’t hear it!

I was happy, I barely survived the jungle, but survive I did for another day!

It was time to get back to see Kathy so we could continue our journey west.

Thank you Jim for teaching me all I know so far. I’m having a blast! I now know to read contest rules before communicating with a contester!