“I’ve got to take Ed to the hospital,” I urgently uttered through the narrow door opening of Jim Cluett’s, W1PID camouflaged VW vanagon. He was focused on dih’s and dah’s that were filling his camper van like ZZZZZZZZs in an army barracks after the first hard day of basic training.

It was a balmy evening, and I had just scampered across the macadam parking lot under the soft illumination of mercury-vapor lights. Pop-up campers, cars, trucks, and trailers were scattered behind the Weirs Times building immediately adjacent to the Funspot entertainment complex like beer cups at the Sandwich Fair. 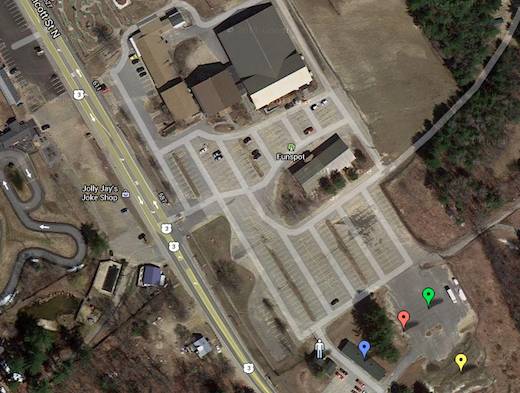 The Weirs Times building is the blue balloon. The green and red balloons mark the staging area for all the campers, trucks and trailers.

Ladder-line antennas reached up from the campers to a web of center-fed and end-fed antennas. Many were multi-band and abuzz with incoming and outgoing QSOs, as well as some dupes. After all it was CNHARC Field Day 2013, and we were having fun. What better place to do that than next to Funspot?

“Ed O’Hearn? What’s wrong?!” exclaimed Jim with a serious look on his face. His eyes were as tightly focused on me as they are on his rig when he’s trying to extract an Eastern European contact running at 2 watts on 20 meters.

I was getting ready to head home for some sleep after being one of the first folks to show up earlier in the day. I’d been at it for nearly twelve hours. My day consisted of logging QSOs, schmoozing with friends that had stopped by to discover more about ham radio, learning more about antennas and just general socializing.

The day before I was part of the setup crew, and had invested three hours at the site setting up antennas and helping to make sure we had all the needed supplies for a successful event.

This was just my second field day. Last year I was still new to the club, and I felt as awkward at the Belknap County Fairgrounds site as a teenager at an adult get together. But fast forward one year with solid friendships forged during the year with other club members and I was quite comfortable in my skin. Perhaps a little too comfortable.

Just after dinner I was talking with a brand new ham, Rosemary Landry, KC1AAP. She’s as sharp as a tack and was trying to create a mental who’s-who log of all at the event. I spied an older ham across the grassy area who had a superb camper parked under the trees and pointed him out to the ever-inquisitive Rosemary. 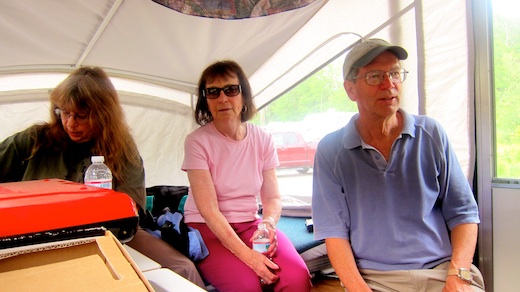 “Who’s that?” Rosemary remarked as she sipped from her water bottle.

“That’s Bob. He’s a wizard about anything and everything that has to do with electronics,” I lamented awash in envy of his knowledge.

Earlier in the day I had talked at length with Bob. Certainly he was a first cousin to Thomas Edison. When I asked him about all the amazing home-brew things he had, he replied, “Nope. I grew up in Maine during WW II where you had to make things if you needed them.”

I didn’t major in math, but that makes Bob an octogenarian, or most certainly closing in on it rapidly.

“You should meet his wife. She’s 28-years old,” I murmured so as to not draw attention to those standing near us.

“Really?”, expounded Rosemary with eyes as wide as an airplane-hanger door.

I hesitated with my response not able to disguise my impish grin. Gotcha!

The next thing I saw was the flick of her wrist and I was drenched in ice-cold water. I must admit, it felt good – both the water and the tease.

That’s what the 2013 CNHARC Field Day was about. Good times, laughter, lots of teasing and the occasional prank. If there was drama, it totally bypassed me, perhaps when I was gobbling up the fresh french bread baked by John Haven, KC1AAG, or the delicious assortment of salads and spaghetti we had at dinner. Thanks Dave, KA1VJU and Peg Brown KB1GQV for that!

My dinner appetite was curbed only because I had stuffed my pie hole at lunch with two of the mouth-watering chicken salad and ham salad sandwiches. That’s two total, not two of each. Earlier, before lunch, Jim and I were absconding with handfuls of fresh potato chips hoping Dick Christopher didn’t see us.

Prior to field day, there was apprehension from the more experienced club members about the Funspot location. Cliff Dickinson, N1RCQ was worried about RF interference from the video game machines just down the hill inside Funspot.

Before we went on the air at 2 pm on Saturday there was concern that the antennas were too close to one another and that would cause problems. But as it turned out, no one reported any harmful or pesky interference. Pests would arise later just like the super moon that was forecast to float above the southeastern sky that weekend.

As day turned into night, just about every type of radio signal was being transmitted from the CNHARC members. Several were doing phone(voice) on many of the bands. Jim Cluett was racking up QSOs on CW faster than I used to cut 2x4s. I tried to do CW on 20 meters mid-afternoon, but my poor skills made my code unintelligible.

Not to worry. I was able to contribute to the club effort with 300 points per the ARRL rules. I did this by getting two published stories in local papers, arranging for the Funspot public location, and getting an elected official to show up at the event.

Teamwork – that’s the hallmark of CNHARC Field Day. You need points, I can get them. You need a clean-power generator with an inverter, Rick Zach, K1RJZ to the rescue. How about a 25-foot mast for an antenna support? Paul Moore, N1VUI is your man. Do you need a Field Day General? Call in Dick Christopher, N1LT.  Dave Megin, KA1VJU puts his shoulder to the Field Day millstone and never asks for praise. The list of CNHARC contributors is as long as the one multi-band antenna that stretched diagonally across the parking lot. Everyone should be congratulated.

As fatigue started to overtake me on Saturday night, I decided to make the rounds to say good night to many of my friends. One person I hadn’t spoken with all day was Ed. 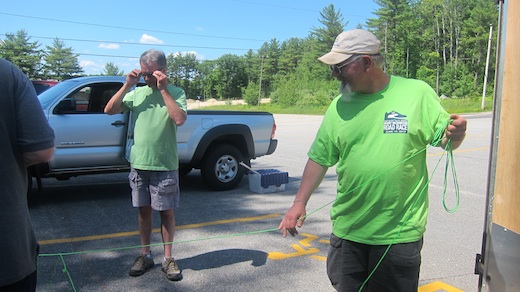 I wandered over to his deluxe camper and saw the soft glow of a computer screen through the open camper windows.  One other person was in the shadows with Ed. I gently tapped on the door and walked up the steps.

There was Ed, N1EO with Dick Christopher, N1LT. These two seasoned operators were silently staring at the computer screen with a very gentle breeze flowing in through the camper screens. They welcomed me in and motioned for me to sit down.

What were they doing? I didn’t see a CW key or paddles. Where was the microphone? What was the weird screen on the computer? Why did it look like a Morse Code QSO was happening on the computer? Why was Ed just occasionally hitting the space bar or enter key on the keyboard with a single finger?

“What’s going on?” I pondered.

“Well it looks to me like the computer’s doing all the work,” I exclaimed not trying to offend.

It was late, but there was a chance I had enough brain juice to pull it off.

If you don’t know Jim Cluett, you should try to get to know him. Why? He’s as wise as he is tall and thin. His sharp wit cuts like a surgeon’s scalpel. His humor is as dry at the Atacama Desert. His motto is Take No Prisoners.

My kind of man.

Much of the day, I suffered from Jim’s zingers. Direct hits aimed at my inexperience in the hobby. I know just enough about ham radio to be highly dangerous.

You could see the pleasure on his face when that thin smile formed on his lips as he’d walk away victorious after lobbing in each verbal grenade.

No problem. I can take it.

I’m all in, just like in Texas Holdem’, when it comes to teasing and pranks.

“I don’t have time to explain Jim. It’s Ed’s finger. He’s really messed it up doing RTTY. Bye,” I said as I slid his vanagon door shut not allowing him to respond.

But I didn’t take my eyes off him, and within half a second his expression said it all as he rotated his head in embarrassment with his lips forming a tight grin.

Yes, Field Day at Funspot was the perfect place. Fun, games, pranks, bonding, and QSOs. Can you think of a better way to spend a weekend in June with a bunch of ham radio friends? Let’s hope we can gather there again next year. By then Ed’s finger will surely be healed.